MONTGOMERY, Ala. -- The Southern Poverty Law Center has announced it would include prominent American veterans' organizations American Legion and Veterans of Foreign Wars in its listing of hate groups, sources confirmed today.

In a written statement signed by SPLC President J. Richard Cohen, the organization said both the VFW and Legion were included since many of their members sympathize with radical, extreme-right-wing ideals such as freedom, safety, and family values.

"I hate to criminalize a group of decorated war veterans," Cohen said, from somewhere deep within a fog of pit sweat in his corporate think-tank steam room, where Sen. Bernie Sanders (I-Moscow) was seen relaxing in the nude.

That last sentence alone should make it clear the article is satirical in nature but obvously many people who shared the story online didn't go through the trouble of actually clicking on the link before sharing it to all their friends. 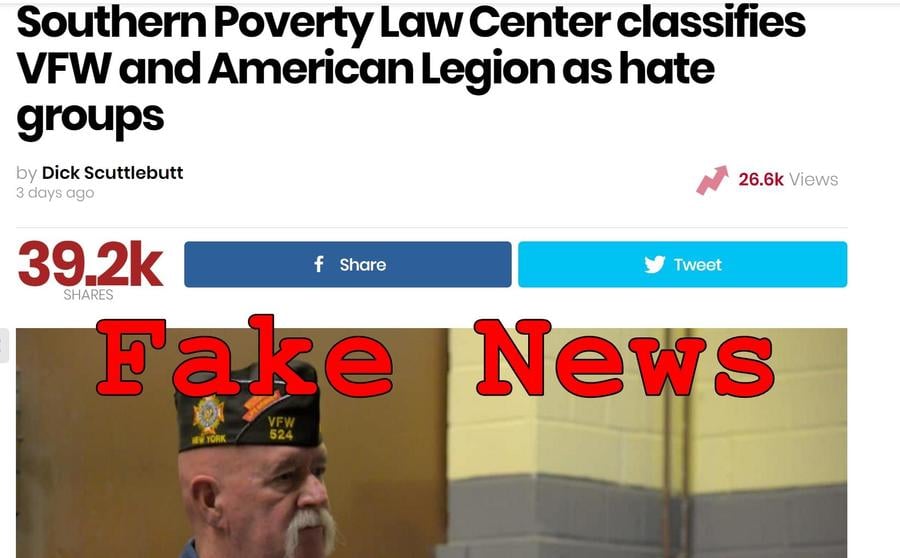 If you search the SPLC's list for "VFW" or "American Legion" these organisations don't show up in the results. (The "Institue for Historical Review" does show up but only because its page has the words "American" and "legion" in it but in different paragraphs).

So relax, no need to get angry about this. And if you see anyone sharing this article as true you can tell them they've been fooled by a piece of satire.