Famous fake/satire website The Resistance: The Last Line of Defense posted an article titled "BREAKING: Michelle Obama Loses $350k Speaking Gig After RACIST Attack On Whites" which first quoted something that actually happened more or less (according to Breitbart, with video):

Tuesday at the Pennsylvania Conference For Women, Michael Obama said that when she attended the State of the Union address the Republican side - which includes Ben Carson and Mia Love and numerous other blacks and women - was "all men, all white." Because of this lie, she says, blacks "don't trust politics."

It then veered into fiction:

Unfortunately for Obama, the hosts of her next speaking engagement, the North American Racial Diversity Society, didn't feel the same way.

"Ms. Obama stepped over the line by attacking or white brothers and sisters," NARDS spokeswoman Beth-Anne Bornstein told her local Legume, Idaho newspaper, the Legume Times. "We feel that diversity is the embrace of all races, not just those of color."

Ms. Obama was to be paid $350,000 for the event. The society instead says it will donate the full amount to organizations helping police officers who were injured in the line of duty.

There is no place in Idaho named "Legume" and the "Legume Times" is a made up newspaper. The "North American Racial Diversity Society" doesn't exist either and its acronym 'NARDS' is a slang term for testicles.

That didn't stop at least one fake news website named "defensepatriot.site" from stealing the entire article. In fact the site is so fake they even forgot to create a menu for their header as this screenshot shows: 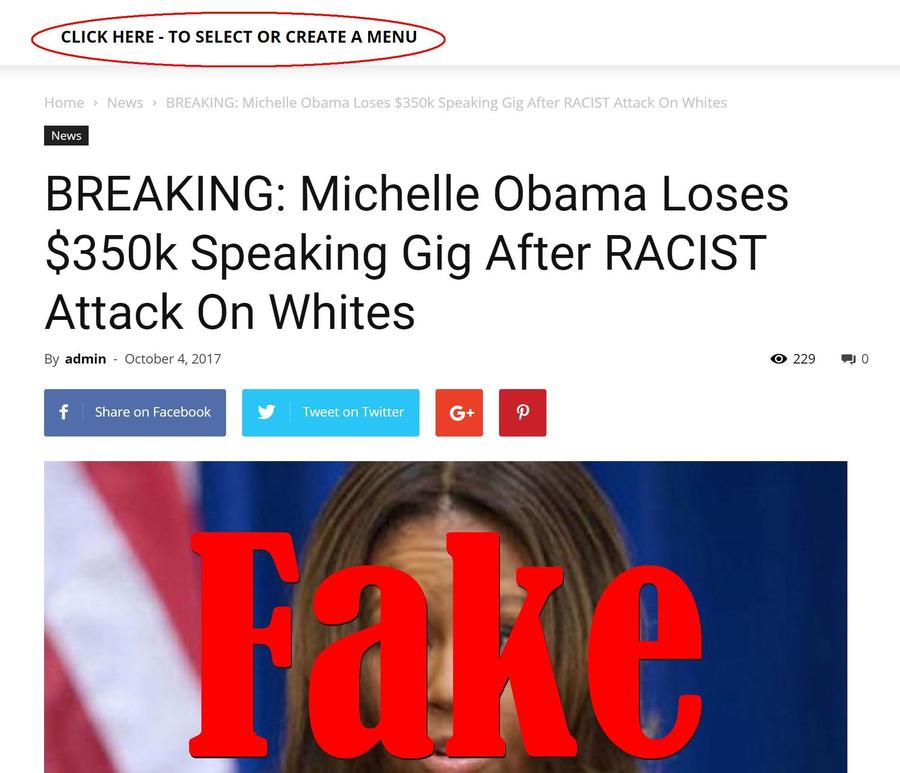 The owner and main writer of the site is self-professed liberal troll Christopher Blair, a man from Maine who has made it his full time job to troll gullible conservatives and Trump supporters into liking and sharing his articles. He runs several other websites such as asamericanasapplepie.org, ourlandofthefree.com and freedumjunkshun.com. Sometimes he is also known under his nickname "Busta Troll". He has at least one accomplice who writes under the pen name "Freedom" and who describes himself "as a patriot from Arizona who is sick and tired of the Left's socialist agenda for America" on the site.