A 54-year old woman by the name of Geraldine Boudin did not sue the Paris Zoological Park and she did not claim a hippopotamus that escaped the zoo sexually assaulted her. The story is a complete fabrication originating on a humor website.

It originally appeared on World News Daily Report under the title "400-pound woman sues Paris Zoo after escaped hippo tried to rape her" (archived here) where it opened:

Paris | The Paris Zoological Park is being sued after a woman claims she was sexually assaulted by a hippopotamus that had escaped the zoo for only a few hours yesterday.

The large semiaquatic mammal apparently was able to slip out of its enclosure last night after massive flooding and a fallen tree severely damaged the security fence.

Geraldine Boudin, 54, owner of a bakery next to the Zoological Park, is suing the zoo's administration after she claims she was sexually assaulted by the huge beast after she was returning home that night.

While it is true that the Paris Zoological Park was briefly evacuated on January 26th 2018 because some animals escaped, no hippopotamus got away. In fact the escape concerned 52 baboons (who raped nobody).

The picture used to illustrate the story actually shows an escaped hippopotamus in Tblisi, Georgia who got away in June 2015. And the woman in the photo is Vilma Soltesz, a 407lb woman who died at a holiday home in Hungary after she was not allowed to fly back to New York City by Delta, KLM or Lufthansa in 2012. 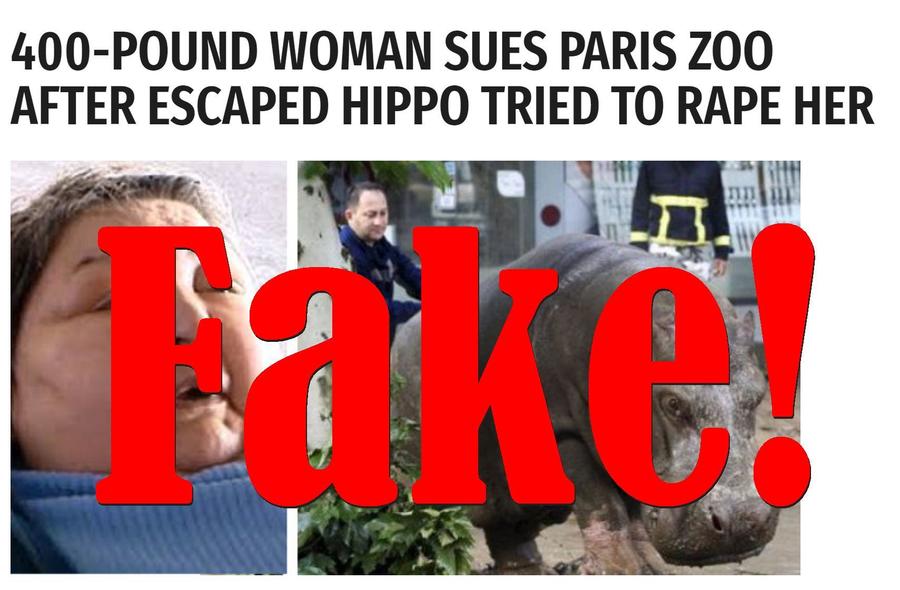 Stories from the site frequently get copied by 'real' fake news websites without a satire disclaimer, often months later. So if you read the story on one of those sites, know it originally came from a satirical publication and should not be taken seriously.