There is no truth to the story about a supposed NFL lawyer by the name of "Dan Goodes" being found dead in New York City after telling reporters that the upcoming Super Bolw LII was "rigged". The story originated on notoriously unreliable website YourNewsWire.com in an article (archived here) titled "NFL Lawyer, Who Claimed Super Bowl Is 'Rigged', Found Dead" which opened:

An NFL entertainment lawyer, who has worked for the corporation for more than 15 years, has been found dead in New York City hours after telling reporters that Super Bowl LII is "rigged."

Dan Goodes was found dead in his hometown of New York City in what early reports described as an "gangland-style execution", hours after blowing the whistle on the "rigged Super Bowl" backstage at a promotional event in Minneapolis.

First of all, the picture of the crime scene that accompanied the article is from a 2017 story about a police officer being killed in his patrol car in the Bronx neighbourhood. 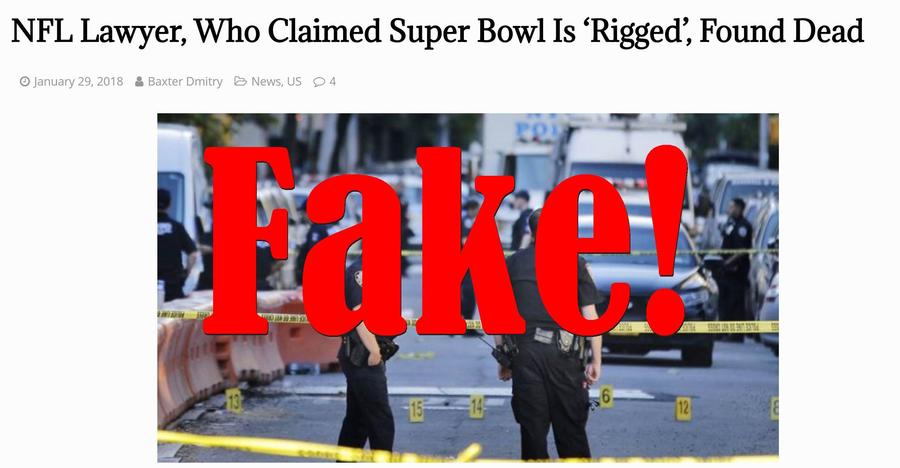 We also found no trace of anyone named "Dan Goodes" on the internet in combination with the search term "NFL", other than exact copies of the hoax story. A real existing person who worked as a lawyer for the NFL would definitely return more hits.

And finally the illustration used to show "NFL Headquarters" in the article was ripped straight from the animated comedy series "South Park", it is not even a real photo. It is kind of hard to take any story with so many easily verifiable falsehoods seriously.