You may have heard President Donald J. Trump told George Soros to "go to hell" while they met during the World Economic Forum in Davos earlier in January 2018. There is no evidence that happened. The alleged source of the claim is U.S. Secretary of Homeland Security Kirstjen Nielsen who supposedly said "He is smiling because he just told George Soros to go to hell" during a press event. That also didn't happen.

The origin of the story is an article (archived here) on notoriously unreliable website YourNewsWire which was simply titled "Trump Just Told George Soros To 'Go To Hell' Right To His Face" and which opened:

During this photo-op at Davos, Switzerland, where the world's financial elite were meeting to thrash out plans for the future, President Trump couldn't help letting slip his real feelings about billionaire George Soros.

A female reporter with a German accent asked President Trump, who had just taken his seat, "Why are you smiling so broadly, like the cat that got the cream?"

Before President Trump could answer, U.S. Secretary of Homeland Security Kirstjen Nielsen, seated on the far left in the photo, said, "He is smiling because he just told George Soros to go to hell." 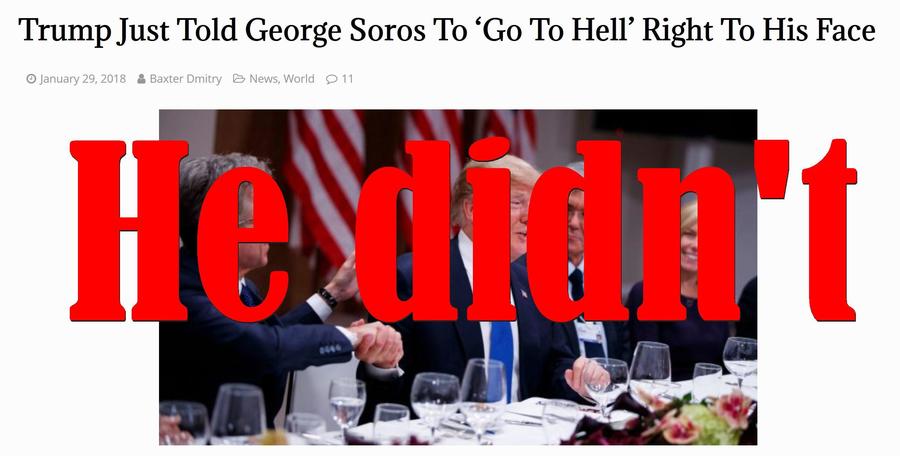 However there is video of the event. A reverse image search of the image turned up this video which shows the entire meeting President Trump had with various CEOs and business leaders at Davos:

Nowhere during the video (archive part 1, archive part 2) does Kirstjen Nielsen even speak and the question from the "female reporter with a German accent" does not appear.

The January 25th meeting was widely reported on, for example here in the Washington Post and no media outlets have made any mention of the supposed quote. Given the Washington media are usually quick to report on any explosive Trump quotes even on the basis of "anonymous sources" or "people familiar with the matter" no self-respecting outlet would fail to take the opportunity to publish a quote directly reported by a named cabinet member. That makes the entire story even more unlikely.