A 24-year-old feminist writer and social worker named Rachel Peterson did not receive threats or intimidating responses to an accidental butt tweet. The reason she never received loads of sexist comments on her tweet is because she does not actually exist. The entire story originated on a satirical website named Reductress that posted an article (archived here) in 2016 titled "Woman Receives Threats, Intimidating Responses to Accidental Butt Tweet" and which opened:

After accidentally tweeting a series of letters and numbers while her phone was in her pocket, 24-year-old social worker and feminist writer Rachel Peterson opened Twitter to find hundreds of threatening tweets in response to the post.

The story contains the name of the actual twitter account (@RPeterson1231) which was registered in 2016 and which contains just one tweet at the time of writing:

We archived the tweet here, along with the only response it actually generated ("classic"). So the part about the responses and threats is clearly fake. But so is Rachel Peterson: the entire story is nothing more but a piece of satire from Reductress, a site that bills itself on its about page as:

The first and only satirical women's magazine, Reductress was founded in 2013 by Beth Newell and Sarah Pappalardo. The mission of Reductress is to take on the outdated perspectives and condescending tone of popular women's media, through the eyes of the funniest women in comedy today. Also, we want people to think we're pretty. 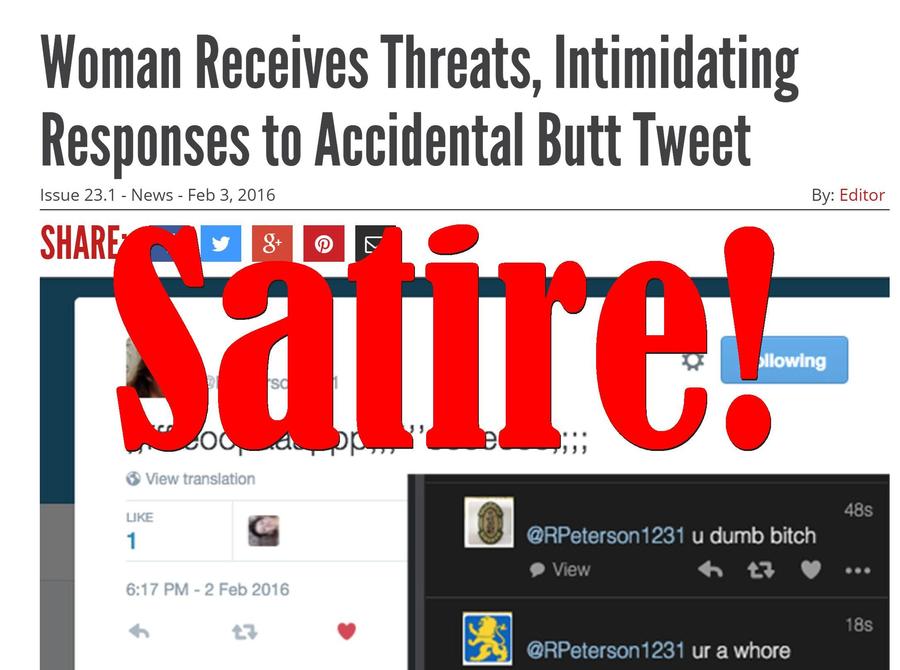 The reason the story seems to have gone viral again in 2018 is that Reductress reposted it on Facebook: