A video/infographic on the Facebook page of David "Advocado" Wolfe claims that sugar is eight times more addictive than cocaine and quotes "Dr. Mark Hyman" as saying "And What's interesting is while cocaine and heroin activate only one spot for pleasure in the brain, sugar lights up the brain like a pinball machine."

The pinball machine quote is not even rendered accurately. On the website of Dr. Hyman (archived here) it is written like this:

And what's even more interesting is that while cocaine and heroin activate only one spot for pleasure in the brain, sugar lights up the brain like a pinball machine!

But what is more relevant the quote is pulled out of context since it is not even speaking about human brains. It occurs in the context of several paragraphs discussing a 2007 study that was done on rats which showed rats preferred getting sweetened water over cocaine injections when given the choice. But that study never claimed sugar was eight times as addictive as cocaine. It also didn't matter if the water was sweetened with actual sugar or with artificial sweeteners, it seems like it was the sweetness overall that influenced the preference of the rats in the experiment, not the presence of actual sugar. 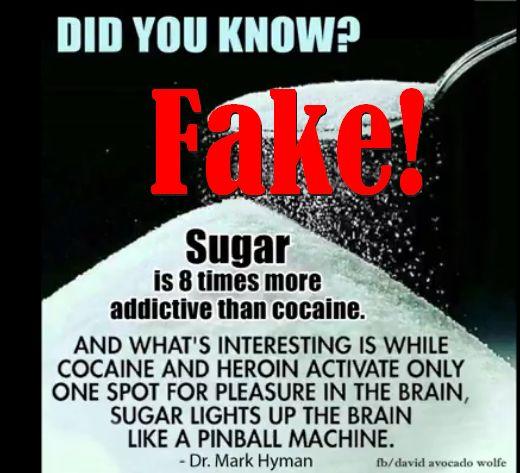 We haven't been able to locate any other scientific evidence about the relative addictiveness of sugar vs. cocaine so we are going to go ahead and rate this claim false. Despite the total lack of evidence the video has been shared over 300,000 times which possibly proves that online nonsense can be quite addictive as well, although we'll wait for experiments on rats before jumping to conclusions on that.