Did Actor Kurt Russell claim the democrats want to abolish 1st, 2nd, 4th, 5th & 6th amendments, the Senate, the Electoral College, the Supreme Court, borders, ICE and more? No, that's not true: the earliest version of that claim originated from a Twitter account which no longer exists and the real Russell isn't actually on Twitter. The quote was later copied by a satire page which turned it into a popular meme. The quote in that meme has now been reworked into a different meme used to promote an Instagram page.

Part of the claim recently resurfaced in a new meme, an example can be seen via this post on Facebook (archived here) where it was published on March 3, 2019.

The image seems to have originated from this instagram page:

Which seems to use a partial copy of the text in the image in this Facebook post (archived here):

That page carries a disclaimer which reads:

Nothing on this page is real. Not a bit of it. Please don't use our page in conjunction with Google or the news, it will only serve to confuse you further.

The caption it put above the image read:

HE TWEETS THE GREATEST STUFF FROM THAT "ALTERNATE" ACCOUNT

There used to be an unverified Twitter account claiming to be Kurt Russell (which has since been taken down) although screenshots survive in some Facebook posts (archived here):

These are the things the Dems have promised to abolish if they regain power. The 1st, 2nd, 4th, 5th and 6th amendments. Senate. Electoral College. Supreme Court. Borders. ICE. And probably a few things I neglected to mention. Can we declare them enemies of the nation yet?

It does not seem to claim Kurt Russell is the author of the quote.

However searching Google reveals the exact date and time when the original Tweet from the now deleted "Kurt Russell" Twitter account was made: 10:57 AM on October 9, 2018

So the bio explains the account was not real.

Interestingly enough, if you search Twitter for @KurtRussellLA a number of results show up that mention @WyattEarpLA (and not @KurtRussellLA): 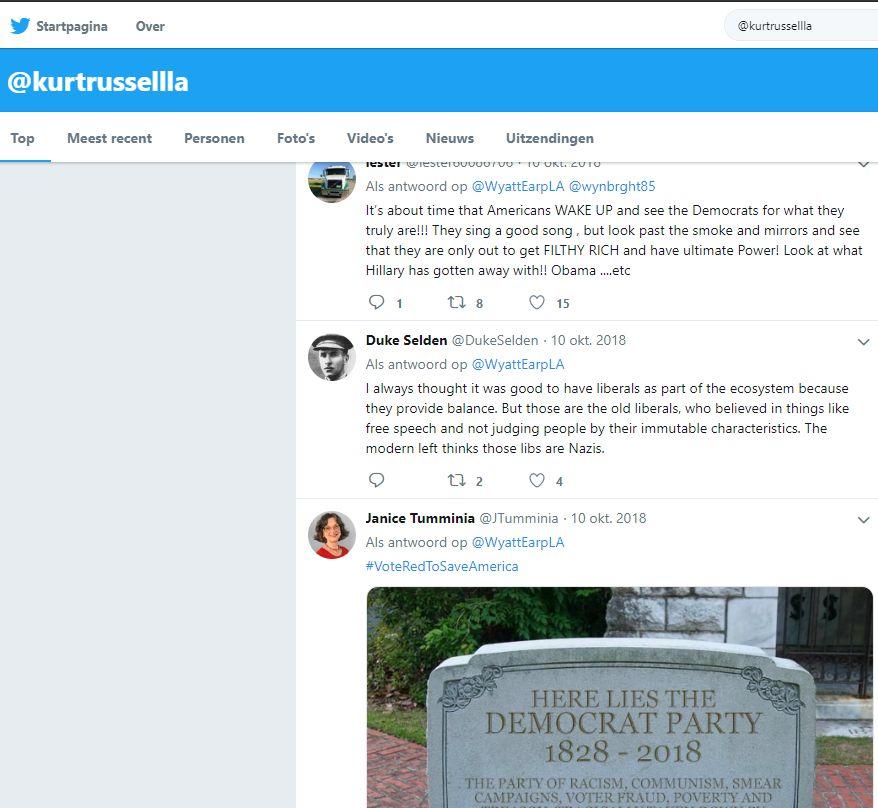 That account has also been deleted but we managed to recover a screenshot of what it looked like from the Google cache (cached here): 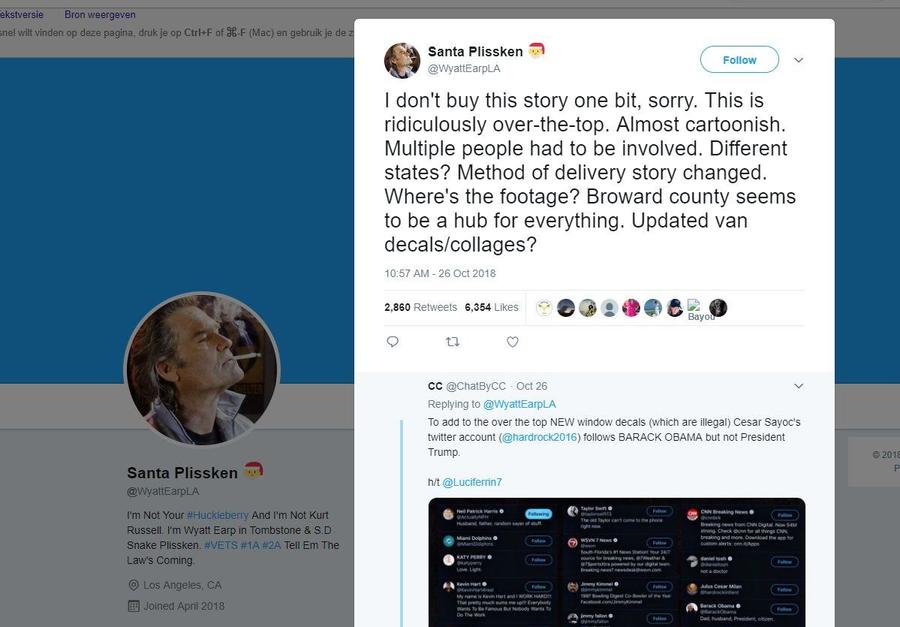 Notice the identical bio. It appears from the date of the tweet that this account either survived longer than the @KurtRussellLA account or it was a renamed version of it. This Snopes article claims it made an identical tweet:

FACT CHECK: Did Kurt Russell Say Democrats Should Be Declared 'Enemies of the State'?

Kurt Russell is one of relatively few Hollywood celebrities known for expressing political views that are not left-leaning or progressive. The veteran actor, star of cult movies such as Escape from New York and The Thing, is a self-professed libertarian and a gun rights enthusiast and gun control skeptic.

And this Politifact article claims the message appeared on the @WyattEarpLA account on November 3, 2018 (when it was using the name "Snake Plisken") at this URL: https://twitter.com/WyattEarpLA/status/1058671930180595712 but the tweet and the account have been deleted and we were unable to find cached version of it:

No, Kurt Russell did not say Trump is 'relentless' 'brave'

A recent Facebook post displaying a picture of Kurt Russell with a quote from the actor praising President Donald Trump has been circulating the social media site. After its posting on Saturday, the photo-quote combo quickly spread and has been shared more than 7,500 times within three days.

In any case, it seems clear that the entire quote used in the images below was made up by a non-official Twitter account. 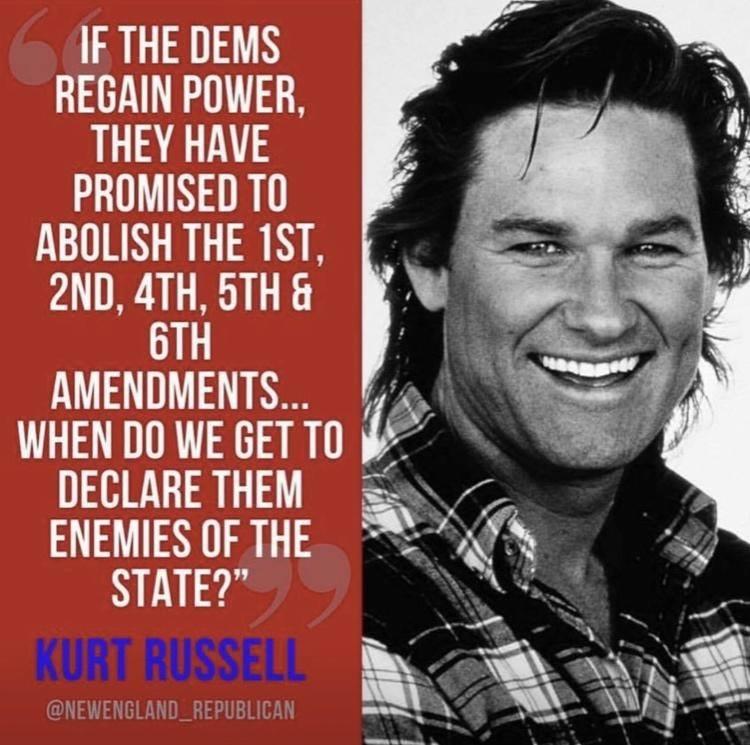 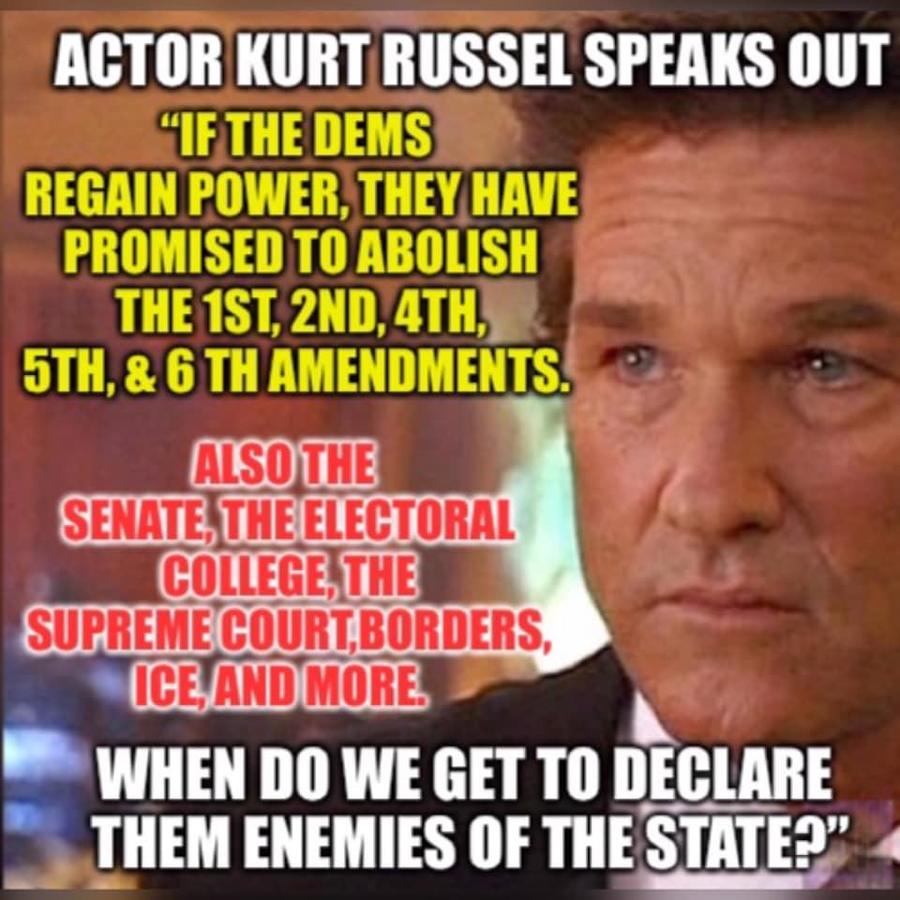 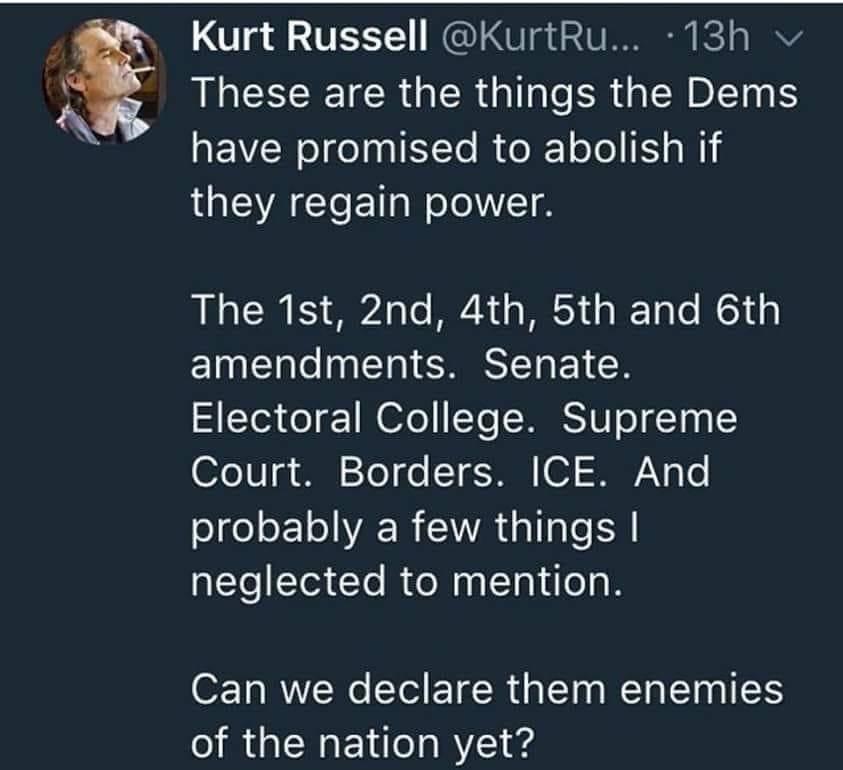