The story originated as early as 2007 online, but was restated in an article (archived here) published in April 2019 under the title "The First American President Was A Black Man -- Not George Washington". It opened:

Don't go checking the encyclopedia for this, because you won't find him there. He is one of those great men who are unfortunately lost to history. If you're extremely lucky, you might actually find a brief mention of his name in some books.

During the formation of the United States of America, Maryland refused to sign this document until Virginia and New York ceded their western lands. Maryland was afraid that these states would gain too much power in the new government because of their large lands.

This is what social media users see:

As with many fake historical stories, this one has grain of truth in it. Yes, John Hanson was the first American elected to preside over congress under the Articles of Confederation in 1781. He was elected unanimously with support from General George Washington, commander of the Continental Army.

As the first President of the United States, Hanson had quite the shoes to fill. No one had ever been President and the role was not richly and adequately defined. His actions in office would set criteria for all future Presidents that will follow.

He took office just as the Revolutionary War against Britain ended. And, almost immediately, the troops demanded to be paid for their services. As was to be expected after any long war like that, there were no funds and resources to pay the salaries.

As a result, the soldiers made threats to overthrow the new government and put Washington on the throne as a monarch.

All the members of Congress ran for their lives and left John Hanson as the only one running the government. He managed somehow to calm the troops down and hold America together.

This story that unpaid American troops staged a mutiny that only Hanson could end also has just a grain of historical truth, but the timeline is wrong. A group of Pennsylvania soldiers did mutiny on January 1, 1781 because they had not been paid, but it lasted just a week and ended two months before Hanson was chosen as president of the congress. It is known as the Pennsylvania Line Mutiny. Another attempted mutiny by 200 New Jersey soldiers was quickly halted when General Washington used New England soldiers to disarm them. There were no members of congress running "for their lives" leaving Hanson to save the government. In fact, all of this happened two months before the Articles of Confederation were adopted and Hanson was chosen to lead the newly-created congress.

The only "evidence" offered that Hanson was Black are three images published in the story. Two are actual photographs purportedly of John Hanson. This is remarkable since the earliest known photograph was made in 1827 and it was not until 1839 that the invention of photography was announced. Hanson died 44 years earlier, in 1783. And these two photos are obviously of different men, with dramatically different hair types and skin tones. Another image used to support the claim Hanson was Black is the U.S. $2 bill as issued starting in 1976. It purportedly shows a Black Hanson sitting amongst other founding fathers at the signing of the Declaration of Independence in the July, 1776. 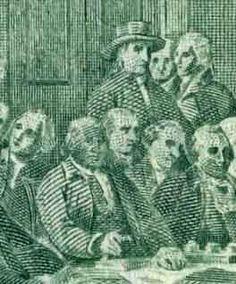 While the printing of the money with green ink may result in one of the men appearing to have a darker face than the other, the bill image is not evidence that this person was Black. Also, Hanson was not a member of the Continental Congress that adopted the Declaration of Independence. He would not have been in the room. For a better look at the men who were there, take a close look at the painting used by the U.S Mint for the reverse side of the $2 bill. 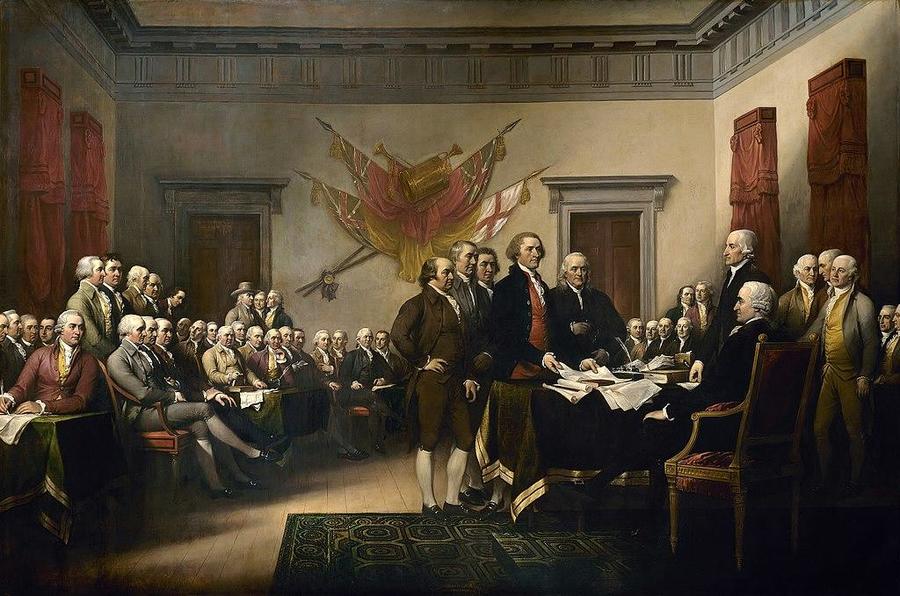 The painting created by artist John Trumbull in 1818 shows no member of the Continental Congress with dark skin.

This is an actual artistic rendering of John Hanson: 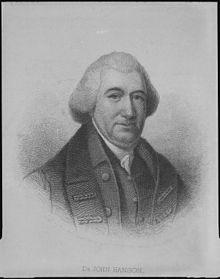 What was Hanson's family heritage? Ironically, there was previous historical controversy caused by a claim that he was "the first Swede president of the United States," but that, too, was disproven, according to an article first published in the Swedish American Genealogist, June 2. It is remarkable that the same man who was claim to have been a Swede was also later believed to be an African.

Hanson grew up in a wealthy and prominent family in Charles County, Maryland, and owned at least a dozen slaves, according to Maryland Historical Magazine. Read the full article here.

One of Hanson's nephews was a signer of the Declaration of Independence. Another nephew signed the Constitution. A third served as governor of Maryland. One of Hanson's grandsons became a member of Congress. Another grandson became a state senator. Two other relatives, William Henry Harrison and Benjamin Harrison, were elected U.S. president in the 1800s.

The website that most recently published this false story -- Liberty Writers Africa -- describes itself as "home to the best of African Politics, African History, African Culture, African Fiction and African News." This site copied details of the false story from previous versions, including this from 2011.