Was the Virginia Beach mass shooting a "false flag" attached ordered by the "Deep State" to distract attention away from the investigation of "SPYgate"? No, that's not true: Twelve people shot to death inside a Virginia Beach municipal center were killed by a disgruntled city employee on Friday, May 31, 2019. There is no reasoning or evidence to support the conspiracy theory that it was a false flag incident.

The story originated from an article (archived here) published by a conspiratorial website The Millennium Report on June 1, 2019 under the title "GLADIO TERROR: Virginia Beach False Flag Mass Shooting Ordered by Deep State to Distract from SPYgate". It opened:

False flag terrorist attacks have become the preferred means of distraction of the American people. Epic scandals like SPYgate require major distractions to change the national conversation--FAST! See ANOTHER MIND-CONTROLLED PATSY: Virginia Beach Mass Shooting frames a 'disgruntled employee' as the fall guy
Mass shootings in high-profile venues are particularly carried out to divert the attention of the body politic when Deep State is under a LOT of pressure. That pressure is coming from the necessity of covering up SPYgate.
In light of the radioactive revelations that are about to be made public by the DoJ after being authorized to declassify the Russiagate hoax documents, things are about to get very dicey. Truly, it doesn't get more serious for the Democrat coup plotters than SPYgate. 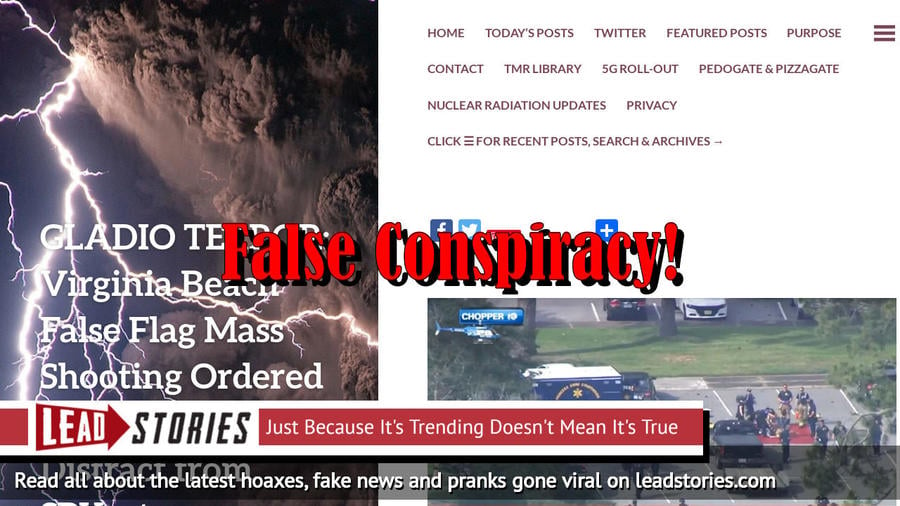 Although it might seem unbelievable to many American that a government agency -- in this case a purported arm of the NATO alliance -- would murder a dozen people for public relations purposes, it is accepted by some:

The false false flag claim cited a purported prediction by another conspiratiorial website that there would soon be a false flag attack:

"Everything Points to a Shocking  False Flag Attack by Deep State"
-- State of the Nation headline from May 27, 2019  from an article titled:  COLLISION COURSE 2019: It's gonna get ugly--REAL UGLY!

The article offers no sourcing that the May 31, 2019 attack was the one predicted. In fact, it cites a lack of evidence:

KEY POINT: No one really knows if this mass shooting in Virginia Beach was for real, a hoax, or a hybrid of the two. It's virtually impossible to determine what really happened in these highly controlled mass casualty events (MCE). Nevertheless, they still have the same effect on the mass consciousness. That's the goal: to instill fear and apprehension among the populace so that they can more easily execute their various hidden agendas. But DISTRACTION is always another stealthy purpose behind these MCEs. There are now so many serious Deep State scandals that the perps have no choice but to cover them up before the dominos start to fall as they never have before.

But the leader of the United States, President Donald J. Trump, does not believe it, even though he is the one who ordered the "SPYgate" probe by the Justice Department. The president tweeted his condolences just after this false flag claim was published:

Spoke to Virginia Governor @RalphNortham last night, and the Mayor and Vice Mayor of Virginia Beach this morning, to offer condolences to that great community. The Federal Government is there, and will be, for whatever they may need. God bless the families and all!

Spoke to Virginia Governor @RalphNortham last night, and the Mayor and Vice Mayor of Virginia Beach this morning, to offer condolences to that great community. The Federal Government is there, and will be, for whatever they may need. God bless the families and all!

Still, others including "Raging Rob" are not buying that it was a real attack with actual dead people:

This may seem to be a joke for most people, but the misinformation could have consequences as some citizens are convinced their government is ready to attack them. This is one example of a tweet predicting this:

The DOJ is ready to strike, and will do so when everyone least expects. America will face what ammunition the Deep State have left, and this is the result. We should expect a turbulent few weeks ahead. https://t.co/9ZjJQwKukV