Were Jussie Smollett's charges of disorderly conduct after he alledgedly staged a hate crime against himself reinstated? No, that's not true: Smollett's case is not as simple as this story's headline suggests, and the possibility of renewed - or new - charges against the actor remains just that: a possibility.

Smollett was indicted on 16 counts of disorderly conduct in March of 2019 after he claimed that he had been beaten and verbally assaulted by two men in January of 2019. But the charges were eventually dropped, and the case was dismissed after Smollett - an actor on "Empire" - agreed to pay his $10,000 bond and complete community service.

Plus, this story has been recycled on the internet for months as shown from the image below from Buzzsumo.com, making it far from a breaking news story. 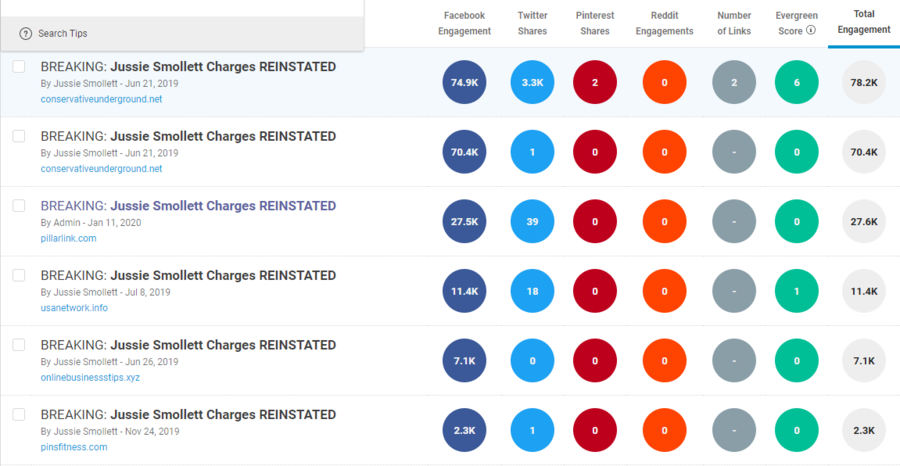 A Cook County, Illinois judge has ruled that a special prosecutor should be appointed to investigate the alleged hate crime hoax case involving actor Jussie Smollett, which would allow charges to be reinstated against Smollett.

CBS News Chicago reported that the judge made the ruling because 'Cook County State's Attorney Kim Foxx had no authority to hand [the case] off to her top deputy after announcing she recused herself.'"

This article contradicts its own headline, saying that an Illinois judge ruled a special prosecutor should be appointed to conduct an investigation of Smollett's case:

"A Cook County, Illinois judge has ruled that a special prosecutor should be appointed to investigate the alleged hate crime hoax case involving actor Jussie Smollett, which would allow charges to be reinstated against Smollett."

But that only means Smollett's charges have the potential to be reinstated, not that they already were. Moreover, in August 2019, former U.S. Attorney Dan Webb was appointed by Cook County Judge Michael Toomin to examine why Smollett's charges were dropped. That appointment is what raises the possibility that Smollett's charges could resurface, or that new charges may arise altogether.

A former state appellate judge, Sheila O'Brien, was the one who advocated for a special prosecutor, and Toomin ruled in her favor in June Of 2019.

At the time of this writing in early January of 2020, the latest is that Google has been ordered to turn over all files associated with Smollett's Gmail account and any location data from GoogleMaps. The warrant also includes all sent emails, drafts and deleted messages linked to his Gmail and any other geo-location information to help aid in the investigation of the dropped charges.

A special prosecutor is also looking into Cook County's State's Attorney Kim Foxx, who recused herself from the case. Foxx was the one who dismissed Smollett's case. The decision angered Chicago police, who had investigated the alleged crime.

This story seems to have originated in June of 2019, shortly after CBS Chicago ran a story with the headline:

Fake news sites ran with the headline, omitting the fact that it was merely a possibility at the time that charges would be reestablished. Since, there have been more than 20 copies of the misleading story on various sites.