Did President Trump play golf during the U.S. Embassy siege in Baghdad? No, that's not true: While Trump did arrive at his Trump International Golf Club in West Palm Beach, Florida, on New Year's Eve, he only spent under an hour there. Media reports said he did not hit the links as the U.S. embassy siege in Baghdad was unfolding.

The story originated from multiple tweets on December 31, 2019, including one (archived here) that read: 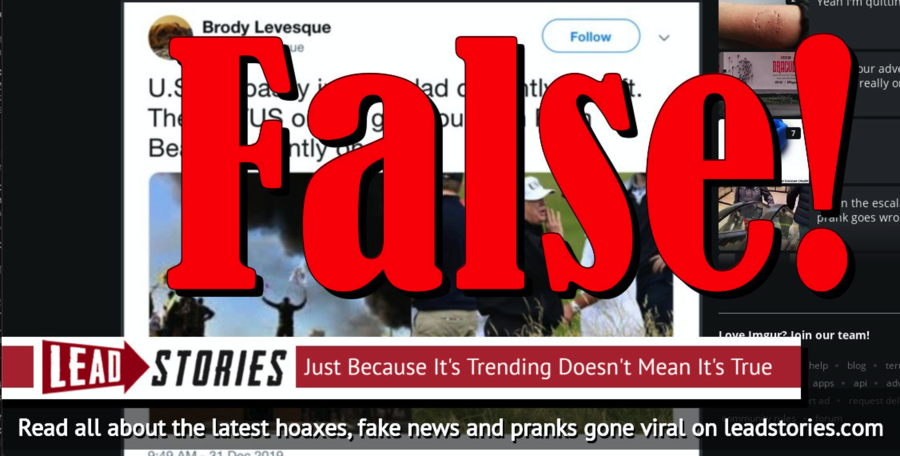 U.S. Embassy in Baghdad currently on left. The POTUS on the golf course in Palm Beach currently on right. pic.twitter.com/g7EAcuYqU6

The photo of Trump in the tweet from @BrodyLevesque - whose Twitter bio lists him as a journalist, editor and author - suggested Trump was playing golf on New Year's Eve of 2019. That might not have been the optics the White House wanted to send with the U.S. Embassy in Iraq under siege by pro-Iranian demonstrators.

The photo in that tweet was taken on July 14, 2018, when Trump played golf at his Trump Turnberry golf course in Scotland during an official trip to Europe. It was not of Trump playing golf on New Year's Eve.

A website, Trump Golf Count, tracks the president's golf outings. It noted that he only spent 49 minutes at Trump International on December 31, 2019, making it highly unlikely he could squeeze in a round of golf.

Trump took to Twitter to deny suggestions he was playing his favorite sport:

The Fake News said I played golf today, and I did NOT! I had meeting in various locations, while closely monitoring the U.S. Embassy situation in Iraq, which I am still doing. The Corrupt Lamestream Media knew this but, not surprisingly, failed to report or correct!

According to CNN's tally, Trump has spent at least 252 days at one of his own golf clubs as president. The Trump Golf Count site lists 239 visits to golf clubs since his inauguration.

Either way, during the 2016 campaign, Trump declared he would be too busy to be playing golf:

"I'm going to be working for you, I'm not going to have time to play golf."

Before he was elected, Trump had frequently criticized President Obama, also a fan of the sport, for his golf outings:

We pay for Obama's travel so he can fundraise millions so Democrats can run on lies. Then we pay for his golf.

Obama played 333 rounds of golf in his eight years as president, according to a CBS correspondent.

On December 31, 2019, Politico reported that Trump did not golf that day but held a meeting about the Middle East while at his golf club. And at least one journalist who had earlier tweeted that Trump arrived at his club offered an update:

Update: The presidential motorcade has left Trump's golf club shortly after arriving. Looks like he won't be playing a round today.