Did actor Tom Hanks pass away after confessing his admiration for President Trump? No, that's not true: The story is a hoax from a satirical website that features "death hoaxes for your thoughts and prayers."

The claim originated in an article published by Conservative Tears on March 22, 2020, titled "Tom Hanks, 65, Passes Away, Confessed Admiration for Trump at the End" (archived here). It opened:

Prolific acting legend, Tom Hanks, passed away suddenly this morning. The cause of his death has not been released.

Hanks enjoyed a long and successful career. He was well-liked by all those in the Hollywood community and his movies were always well received by the public, even the really crappy ones like "Castaway." His body of work will live on for decades to come. 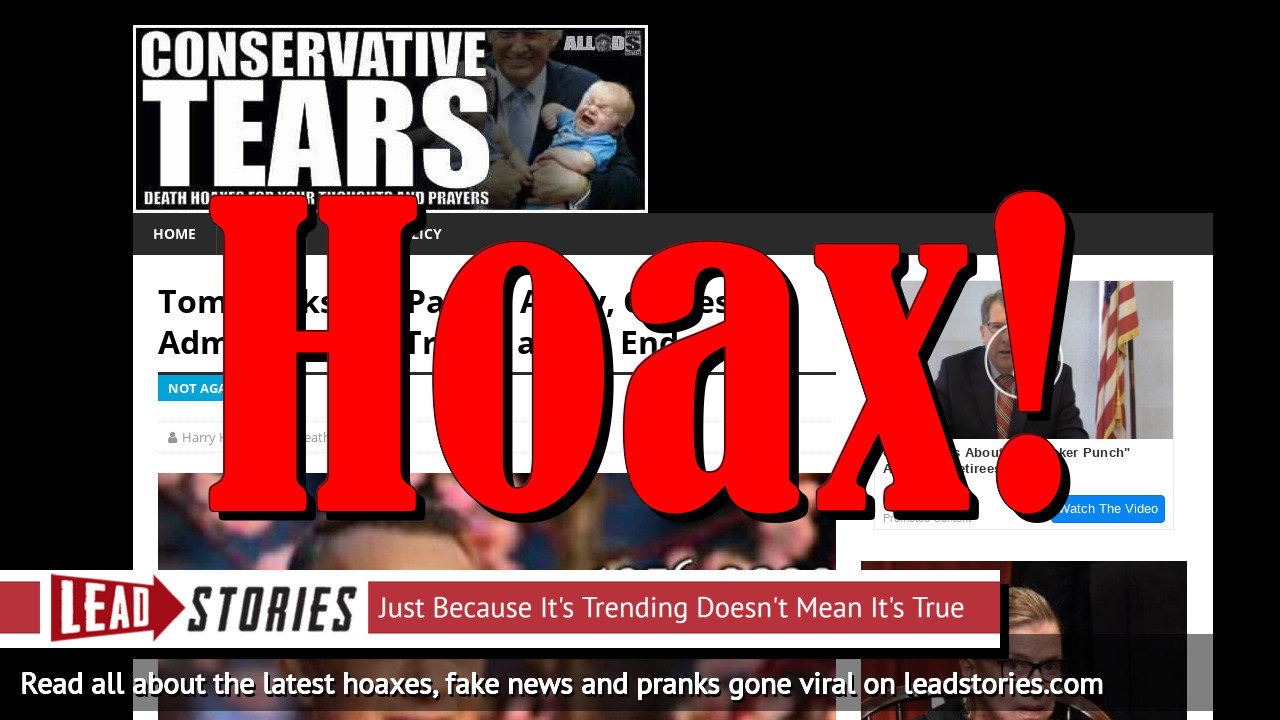 Tom Hanks, 65, Passes Away, Confessed Admiration for Trump at the End

The world has lost an iconic acting legend.

The story is entirely made up. Hanks did not pass away, and he and his wife Rita Wilson are recovering from the novel coronavirus. On March 11, 2020, the couple announced on Instagram that they had tested positive for the virus. (The hoax story never referenced this fact.)

Hey folks. Good News: One week after testing Positive, in self-isolation, the symptoms are much the same. No fever but the blahs. Folding the laundry and doing the dishes leads to a nap on the couch. Bad news: My wife @ritawilson has won 6 straight hands of Gin Rummy and leads by 201 points. But I have learned not to spread my Vegemite so thick. I travelled here with a typewriter, one I used to love. We are all in this together. Flatten the curve. Hanx

The Conservative Tears site also got Hanks' age wrong. He is 63, not 65.

The site is part of the "America's Last Line of Defense" network of satire websites run by self-professed liberal troll Christopher Blair from Maine.

Blair has been in a feud with fact checking website Snopes and has also criticized other fact checkers who have labeled his work "fake news" instead of satire. In reaction, he has recently rebranded all of his active websites and Facebook pages so they carry prominent disclaimers everywhere.

Articles from Blair's sites frequently get copied by other fake news sites that often omit the satire disclaimer and any additional hints the stories are false. Blair has tried to get these sites shut down, but new ones keep cropping up.

NewsGuard, a company that uses trained journalists to rank the reliability of websites, describes conservativetears.com as:

We wrote about Conservative Tears before. Here are our most recent articles that mention the site: