Did Valley County, Montana, government officials order people to wear "government-issued" pink armbands, which "denote the customer has been in the area more than 14 days and submitted to quarantine protocol?" No, that's misleading. the Valley County Commission issued an apology and revised a confusing flier -- which did not properly explain the policy -- after it went viral on social media.

Officials there said the mistaken flier was the result of a "break-down of our internal processes."

"Valley County, Montana is mandating that people wear government-issued pink arm bands in order to purchase products inside of stores. The measure, enforced by the Valley County Health Department, insists that store-owners keep customers out unless they have the pink arm-bands, which denote the customer has been in the area more than 14 days and submitted to quarantine protocol." 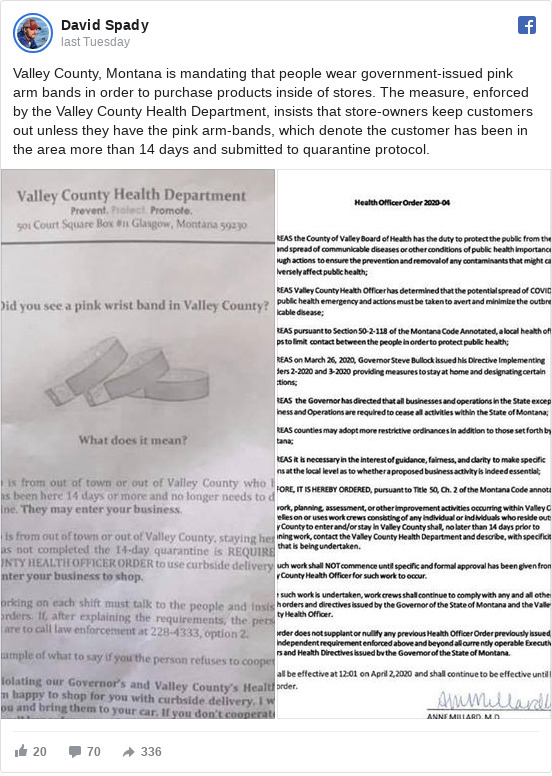 The flier was actually a well-intentioned effort that was wrongly interpreted, according to Valley health officials.

The confusion began when the Valley County Health Department partnered with a contractor that employs "out-of-county" contractors for "essential work purposes" to have its employees wear pink wristbands following a 14-day quarantine period to assuage public concern about whether the workers were spreading the virus in the community, according to the commissioners' statement posted on Facebook:

In a break-down of our internal processes, a flier went out to local business owners seemingly indicating such wrist bands [sic] are required for out of county individuals, and that local business owners were obligated to report violations of the health orders. That is not the intent of the Valley County, and that flier has been rescinded."

The county commissioners released a statement to local news agencies, as well as posting it to their Facebook page and other county websites, "as soon as we learned about the miscommunication," Mary Armstrong with the Valley County Commission told Lead Stories on April 21.

But not before the flier was picked up by the Montana Daily Gazette (archived here), which describes its mission as giving "traditional values a voice and to commandeer the online news market away from mainstream media." Here is how the story read:

In what might be one of the most over-the-top and draconian responses to coronavirus yet seen in Montana, Valley County is mandating that people wear government-issued pink arm bands in under to purchase products inside of stores. The measure, enforced by the Valley County Health Department, insists that store-owners keep customers out unless they have the pink arm-bands, which denote the customer has been in the area more than 14 days and submitted to quarantine protocol.

According to the flier produced by the Valley County Health Department, out-of-towners who lack the government-issued armbands will be prohibited from stores and residents are notified to call law enforcement if they do not comply.

The health department even issued a script to warn customers to flee, saying, "You are violating our Governor's and Valley County's Health Officer's orders. I am happy to shop for you with curbside delivery. I will get the items for you and bring them to your car. If you don't cooperate, you will force me to call law enforcement."

The Gazette updated its story when the county commissioners issued their statement.

This was implemented to help alleviate community concerns about the potential spread of COVID-19. These bands are not government issued and are not a part of any of the current health orders in place. Rather, they are a good faith effort by these contractors to try to put the community at ease...We apologize, again, for any confusion this has caused. We are addressing our internal processes and want to thank all community members for continuing to work with us during this unprecedented time."

"There is no armband or wristband order, nor was there ever such an order put in place by our County Health Officer," she said. "We have been receiving many phone calls with regard to the inaccurate reporting, and some of them have been both threatening and abusive."