Did Elisa Granato, a volunteer in the Oxford COVID-19 vaccine trial, die just two days after receiving the experimental injection? No, that's not true: Granato woke up on April 25, read a fake news story about her own demise, and responded that she was alive and well.

Elisa Granato, the first volunteer who availed herself in Oxford for a jab in the first Europe human trial of a vaccine to protect against the coronavirus pandemic has died. She died two days after the vaccine was administered, authorities have said and added that an investigation into the cause of the death has been ...

Elisa Granato, the first volunteer who availed herself in Oxford for a jab in the first Europe human trial of a vaccine to protect against the coronavirus pandemic has died. She died two days after the vaccine was administered, authorities have said and added that an investigation into the cause of the death has been ...

Granato made a tweet (archived here) to confirm that she was alive, and asked people to not give this fake news any attention. For an alternative to reading fake news, she offered a video of a kitten. Before changing her Twitter account privacy settings to "protected," she had publicly written:

Nothing like walking up to a fake article on your death ... I'm doing fine everyone. Please don't share the article in question, we don't want to give them attention / clicks. Have a cute cat instead!

The Department of Health and Social Care also made a tweet:

News circulating on social media that the first volunteer in a UK #coronavirus vaccine trial has died is completely untrue.

Before sharing unsubstantiated claims online, use the SHARE checklist to help stop the spread of harmful content:
▶️ https://t.co/9rAFQES8Xm pic.twitter.com/HgG4cHnLFQ

These reassurances did not prevent some people from wondering if there wasn't a cover-up. Why would Granato hide her Twitter account? Why did she post a video of a kitten instead of a more satisfying proof of life, like a video holding a newspaper? While many commenters focused on the human target blindsided by this fake news story, few turned around to question the publisher making this claim.

Almost two weeks earlier, on April 14, 2020, a spammer, Vida Werenkye, posted a link to a N5ti.com story into a New York Buy/Sell/Trade group. The story was titled, "First person who received Covid-19 vaccine has died; two others in critical condition".

This article was written by James Alami, the same author who wrote the false story about Granato. The earlier story, now removed from the n5ti website, was nearly identical to the other, only it was based in Seattle and was about a woman named Jennifer Haller.

The spammer employed a trick that Lead Stories has seen many times before from this network, which also includes the websites AB-TC.COM, CBTVN.COM, and MCMNT.COM. They turn the commenting off on the post so the people exposed to the fake news in Facebook groups do not have the opportunity to discuss the story amongst themselves -- or to warn others before they are tricked into clicking on the link. 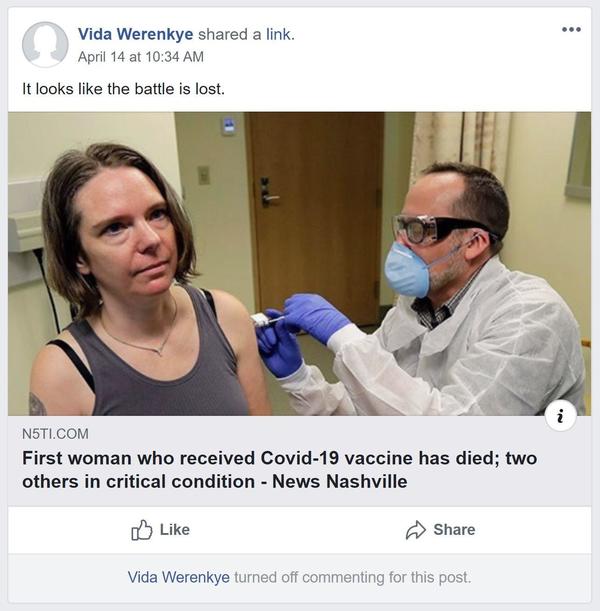 This is how the now-deleted April 14 article (cached here) began:

The first person to get the Covid-19 vaccine has died, officials have said.
The 43-year-old mother-of-two from Seattle after almost a month after availing herself for a jab in the first human trial of a vaccine to protect against the coronavirus pandemic.

After taking the vaccine, Jennifer Haller said it was an amazing opportunity for her "to do something."

Two other patients who received the vaccine are in critical condition.
Four patients received the jab at the Kaiser Permanente research facility in Seattle, Washington, reports the Associated Press news agency.

Officials say the fourth person is being monitored against any adverse effects of the vaccine.

Compare the sentence in each of the stories as the "underlying health condition" is introduced. When Granato's name was substituted for "the Seattle woman," the word "the" was left in.

Researchers who are awaiting for an autopsy to be conducted believe the Seattle woman had an underlying health condition which was not disclosed to health officials.

Researchers who are awaiting for an autopsy to be conducted believe the Elisa had an underlying health condition which was not disclosed to health officials.

Throughout the month of March, Vida was posting n5ti.com links to a fake news story into Facebook groups around the world. This story was also written by James Alami. This fake news story is about a father, "Timothy", who, along with his wife and son, died within three days of each other before testing positive for COVID-19. 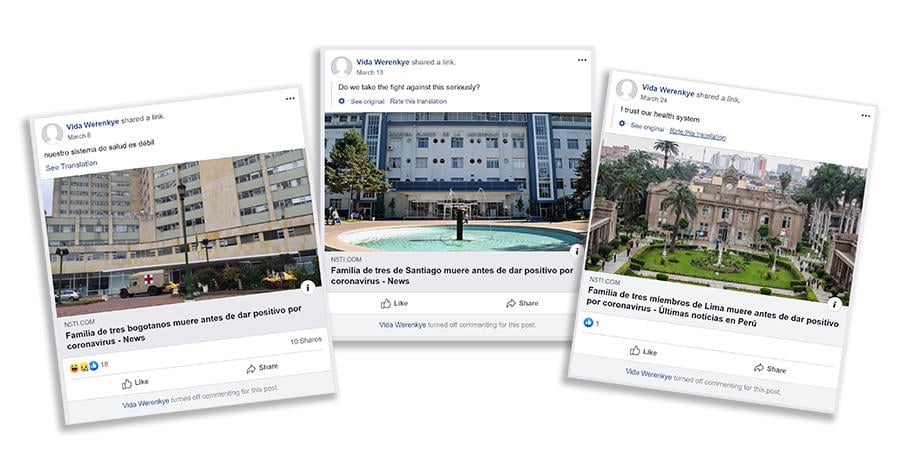 The story was published in French, English, Spanish and Portuguese. Timothy's family allegedly died in at least nine cities --Abidjan, Georgetown, Santiago, Lima, Port Louis, Mpumalanga, Brasilia, Bogota, and Port of Spain -- after being treated by a Dr. Ahmed at specific hospitals in those cities. 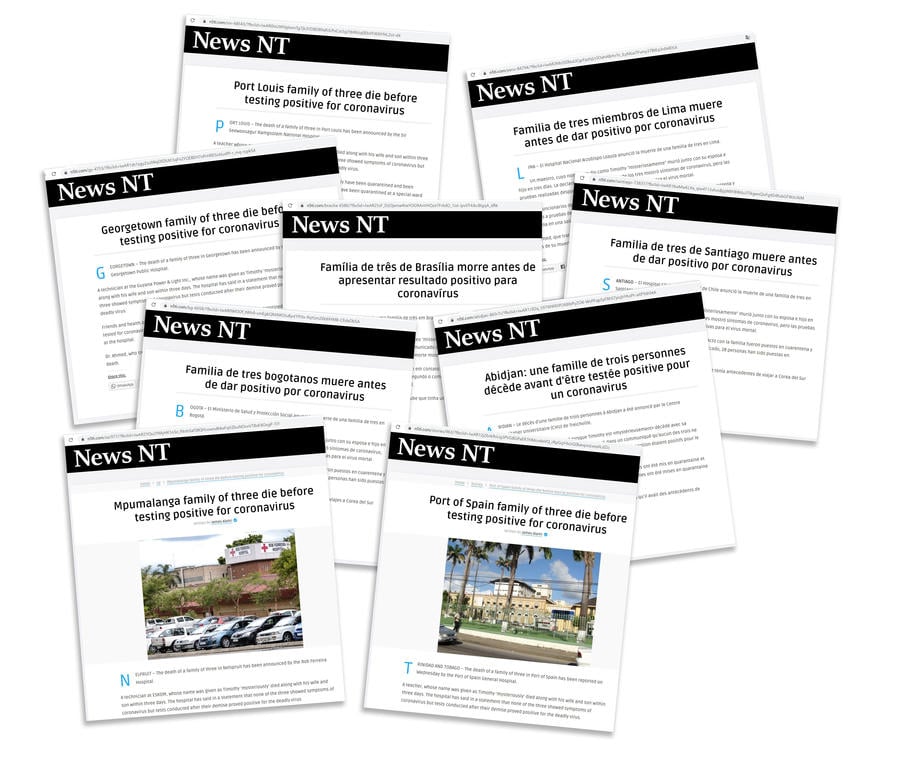 We wrote about n5ti.com before. Here is our most recent article to mention the site:

We wrote about the website ab-tc.com before, and Lead Stories will continue to update with what we learn about this fake news publisher. Here are our most recent articles that mention the site: