Did Hobby Lobby CEO claim not being able to own slaves violates his religious freedom? No, that's not true: This is a fictional story from a satire website.

The story appeared in an article (archived here) where it was published by the website american-buffoon.com on April 13, 2020 under the title "Hobby Lobby CEO Claims Not Being Able To Own Slaves Violates His Religious Freedom". It opened:

Hobby Lobby is back in the news again, and this time it's even more controversial than before. In an interview, CEO David Green made the case that the abolishment of slavery violates his religious freedoms under the 1st Amendment.

"The 1st Amendment comes before the 13th and 14th, and the Bible clearly approves of owning slaves" stated David Green on Fox News this morning. 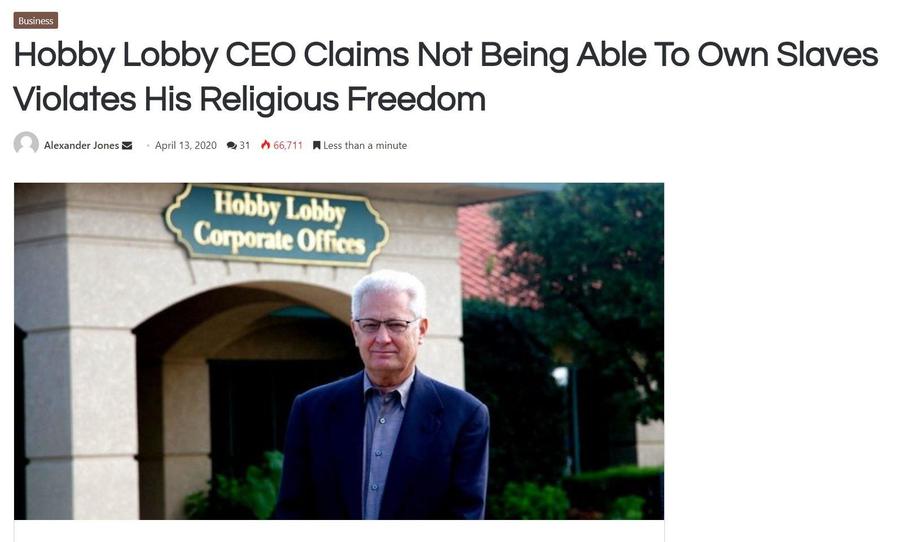 The satirical article is also embedded with several almost invisible hyperlinked Easter Eggs. One, at the words "Fox News" leads to another American Buffooon satire article about Paula Deen and the words "the case" point to a news story on the Planned Parenthood website about Burwell v. Hobby Lobby and Birth Control.

The motto of American Buffoon is "Unfair. Unhinged. Unbelievable."