Is it true that "everyone could test positive" for the novel coronavirus that has ravaged the United States and world? And is it true that hardly anyone has died of the disease COVID-19 caused by the virus? No, neither is true. If you just look at the U.S., 9% of people tested for the virus turn out to be confirmed coronavirus cases, and of those, about 6% (the figure fluctuates) die from COVID-19, according to the Centers for Disease Control and Prevention.

The claims appear in a video (archived here) posted to YouTube on July 2, 2020, titled "Dr Rashid A Buttar WHY EVERYONE COULD TEST POSITIVE." The text below the video reads:

The rate of COVID supposedly is going up -- boom boom boom boom boom. That's the rate of diagnosis -- and there's actually an article that came out; there's actually a couple articles, and i'm going to show this actual screenshots of some of these articles -- as well as some of the doctors that have recently reached out to me, or that reach I've reached out to, other friends of mine, saying that this whole thing with the COVID-19 diagnosis increasing is not accurate."

Many false or misleading claims are made in this video, which runs five minutes and 30 seconds. So, we'll start with the first, which is the first statement of the video:

The rate of diagnosis is in fact -- not supposedly -- going up, according to The Associated Press, Politico and just about every other outlet, in part due to more testing being available and in part because many economies at the state level in the U.S. reopened early, allowing people to gather and not social-distance without wearing masks. This is the recipe that medical officials and most experts on the virus and disease have warned against, since it is the easiest way for the virus to spread from person to person -- no matter if people are at that time showing symptoms.

The second comes right after it:

...this whole thing with the COVID-19 diagnosis increasing is not accurate."

That, according to the CDC and other reputable organizations and health agencies, is just false. Here are the CDC's latest figures showing the number of people tested, the number of positive tests and the percentage of those tests that showed a positive diagnosis (the data is current through July 2):

Buttar claims he was going to show headlines of stories about his premise, but that does not happen. He also makes this false claim at the :50 mark, complete with captions running across the screen stating: 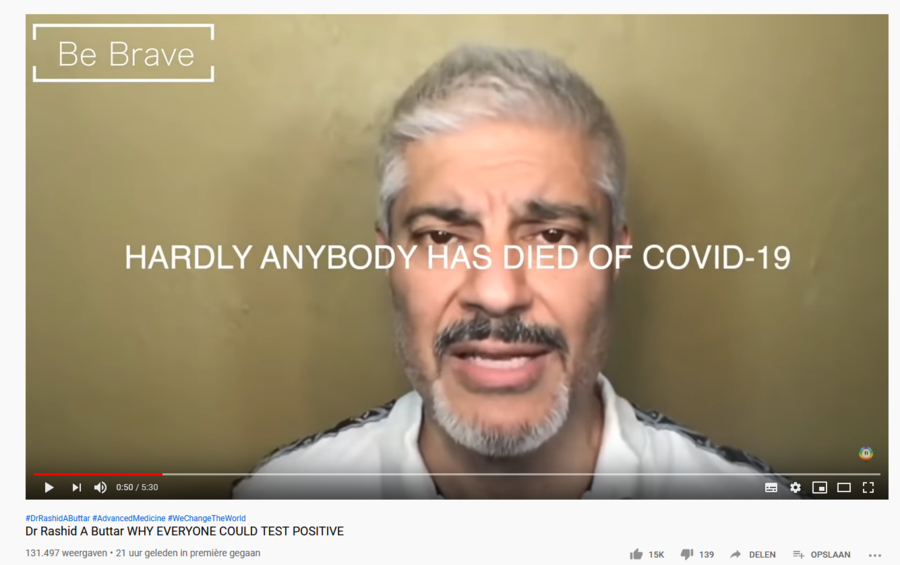 While different medical examiners or coroners' offices use different criteria, and while people not suspecting they have the virus go to the hospital for other reasons only to learn they are positive for coronavirus, the consensus among medical authorities and public officials is that hundreds of thousands of people worldwide have died as a result of COVID-19. Whether it was the primary cause or the secondary cause that sped up the death of an unsuspecting patient hospitalized for other reasons initially, the fact remains that the disease is deadly.

Here is a screenshot showing the global toll of COVID-19, from Johns Hopkins University & Medicine Coronavirus Resource Center, which is updated daily:

According to tracking site worldometers.info, which updated its site July 3, this is the worldwide total -- with the U.S. making up the highest total with 131,808 deaths: 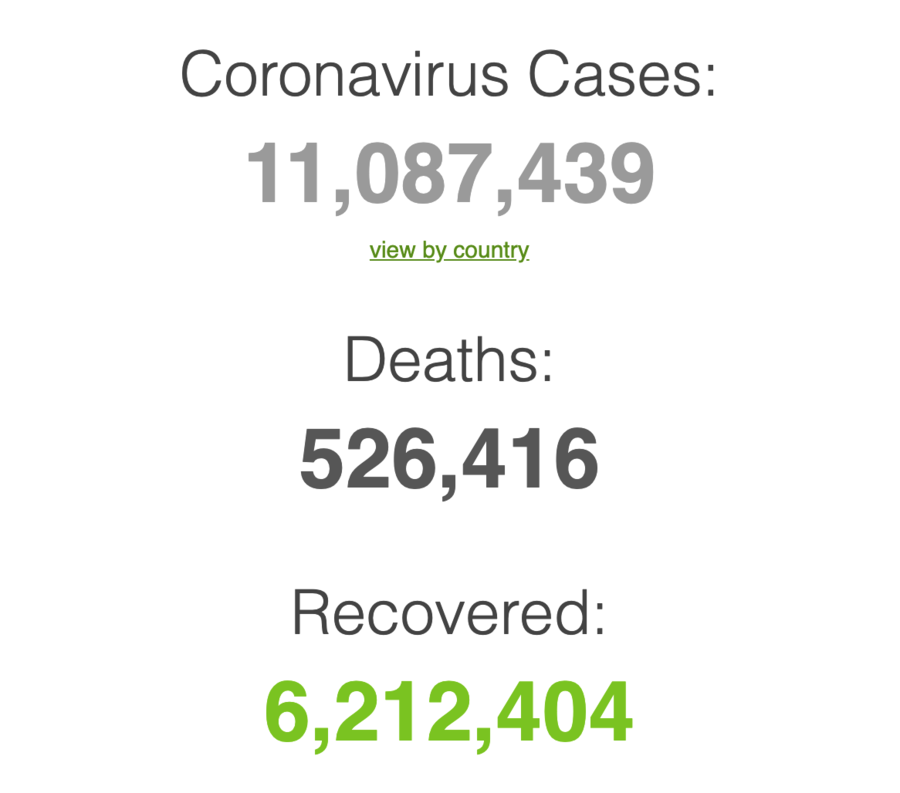 As for the mortality rate from COVID-19 being practically zero, the CDC says this:

If anything, as Scientific American reports, the deaths are most likely undercounted -- not exaggerated or made up:

As coronavirus has swept through the United States, finding the true number of people who have been infected has been stymied due to lack of testing. Now, official counts of coronavirus deaths are being challenged, too.

In Colorado, for example, a Republican state legislator has accused the state's public health department of falsely inflating COVID-19 deaths; in Florida, local media have objected to the State Department of Health's refusal to release medical examiner data to the public, alleging that the state may be underreporting deaths.

The reality is that assigning a cause of death is not always straightforward, even pre-pandemic, and a patchwork of local rules and regulations makes getting valid national data challenging. However, data on excess deaths in the United States over the past several months suggest that COVID-19 deaths are probably being undercounted rather than overcounted."

The CDC, in a page updated July 1, concedes as much. And the JAMA Network published this on July 1 about deaths from March through April:

The number of publicly reported deaths from coronavirus disease 2019 (COVID-19) may underestimate the pandemic's death toll. Such estimates rely on provisional data that are often incomplete and may omit undocumented deaths from COVID-19. Moreover, restrictions imposed by the pandemic (eg, stay-at-home orders) could claim lives indirectly through delayed care for acute emergencies, exacerbations of chronic diseases, and psychological distress (eg, drug overdoses). This study estimated excess deaths in the early weeks of the pandemic and the relative contribution of COVID-19 and other causes.

You cannot use the RT-PCR to establish an infectious process and the gold standard of seeing what the test is, because remember it has to be a surrogate for PCR to work. You have to have a surrogate test that you have a gold standard, and you test against it. It has never ever been established.

Now, I believe if you look at and understand how the PCR works, they amplify it. They keep on amplifying it until you start seeing a certain number of whatever you're looking for -- a certain number -- or start to appear. I believe that at this point, they're going to continue to amplify the test to the point that everybody on this planet will test positive."

Lead Stories is attempting to run this claim by medical personnel to see if it has merit. But the last part seems, at this state of fighting the pandemic, to be false and impossible as some people either get the virus or they don't; some people are completely healthy, and others are ill.

Another claim comes at the 2:19 mark, where Buttar says:

They cannot rule out that if you've had a cold before, that you could test positive for COVID-19."

Lead Stories has debunked a similar claim, in which we showed that CDC did not show that the common cold is counted as a postive COVID-19 result.

At 2:53, Buttar, a reported conspiracy theorist with questionable takes on the pandemic, who is profiled in this HuffPost piece, claims the rate of death from COVID-19 -- which he earlier claimed was zero -- was half that of the seasonal flu. This is false, as explained in this story by National Geographic on July 2. Also, the World Health Organization -- often criticized by conspiracy theorists and many conservatives, including President Trump -- draws a distinction between COVID-19 and the flu, and says the mortality rate for the pandemic is much higher than for the seasonal bug:

And on June 23, Business Insider ran this graph to highlight the difference in rates: 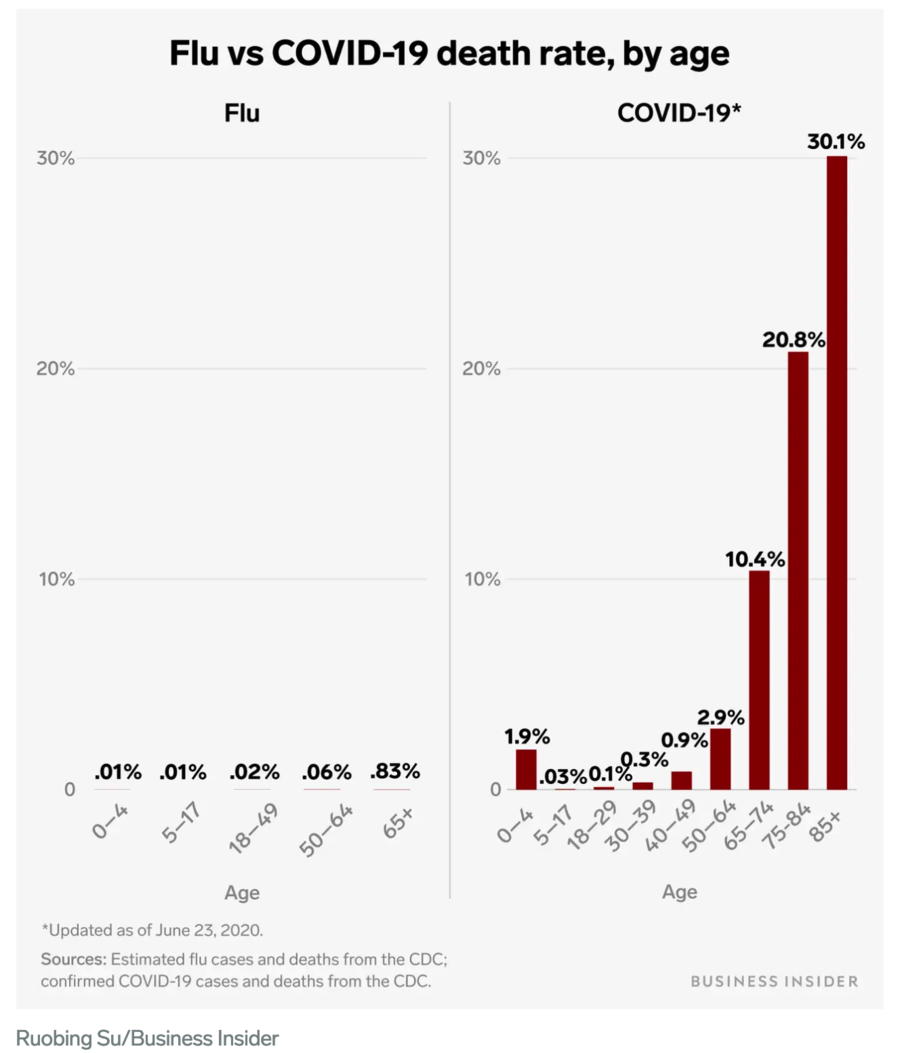 And at 3:07, he claims authorities, perhaps in Brazil:

...have actually sent in troops and investigators into some of these hospitals that are saying that the 5,000 people that are sick with covid, they barge in, forced their way into the hospitals and guess what they find -- not only are they not 5 000 patients in there, there's no patients in there. In fact, the whole hospital is under construction, under renovation; not a single patient there."

Other debunk articles from Lead Stories concerning false claims by Buttar include:

Fact Check: NO Evidence Social Distancing And COVID-19 Are A Government Plot To Track And Control Citizens

Fact Check: HR 6666 Is NOT Going To Forcibly Remove People With COVID-19 From Homes As Dr. Rashid Buttar Clai