Did AOC -- U.S. Rep. Alexandria Ocasio-Cortez of New York -- propose ending Social Security benefits after age 75? No, that's not true: This story is satire from a website that specializes in creating outrageous headlines. Many people share the outrage without even reading the article. Articles from this network are sometimes plagiarized and republished by other websites -- without the satire labeling.

The story originated from an article (archived here) where it was published by bustatroll.org on April 30, 2020, under the title "AOC Proposes Ending Social Security Benefits After Age 75." It opened:

We all know that Democrats do not care about senior citizens. It's almost like they have no elderly family members themselves. Of course, they do and we can only assume they don't care about them either.


The latest Democrat scheme involves AOC, yet again trying to muck up our Social Security system. 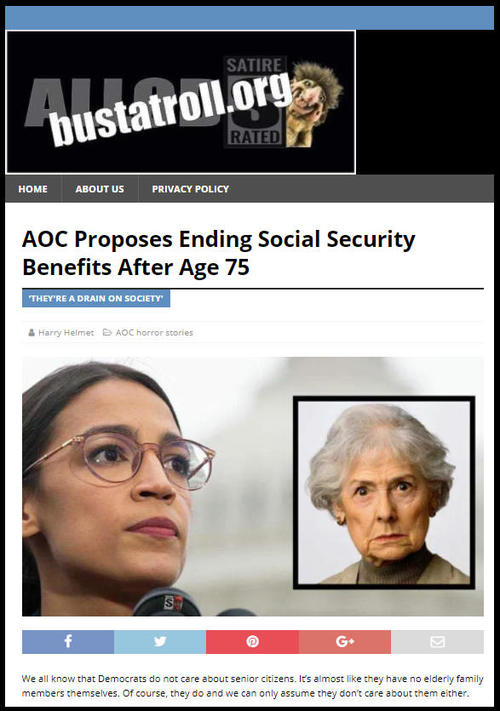 This is her latest proposal is a doozy:

"Look, these people are a burden on society. This is a capitalist society in which we let the weak die so that the strong may thrive, so that is what I intend to do. Seniors get enough handouts as it is, so I say we put a cap on it.

If you reach the age of 75 and still can't support yourself on your own, then perhaps you made bad life choices. Maybe they should pull themselves up by the bootstraps or something. Why should the taxpayer have to subsidize your poor decisions? They will no longer have to under my proposal."

These are such horrible words coming from someone that is supposed to represent "we the people."

The website and article are clearly marked as satire with a logo of a troll peeking out from behind a sign that says, "Satire Rated." This article is filed under "AOC Horror Stories." Perhaps most telling is how the article closed:

For years, Republicans have chipped away at social net programs that progressives like AOC normally support. Yet, it's AOC who needs to go, according to the taters who share and read the first few paragraphs of this story.

What does AOC really say about Social Security? Here she appears in a short video with Rep. John Larson, chairman of the Social Security subcommittee. The video was posted to his YouTube channel on November 1, 2019:

The website bustatroll.org is part of the "America's Last Line of Defense" network of satire websites run by self-professed liberal troll Christopher Blair from Maine along with a loose confederation of friends and allies. He runs several websites and Facebook pages with visible satire disclaimers everywhere. They mostly publish made-up stories with headlines specifically created to trigger Republicans, conservatives and evangelical Christians into angrily sharing or commenting on the story on Facebook without actually reading the full article, exposing them to mockery and ridicule by fans of the sites and pages.

When fact-checkers point this out to the people liking and sharing these copycat stories some of them get mad at the fact-checkers instead of directing their anger at the foreign spammers or the liberal satire writers. Others send a polite "thank you" note, which is much appreciated.