Does a letter from Director of National Intelligence John Ratcliffe support the claim that Hillary Clinton planned "the Russia hoax" against Donald Trump in July 2016? No, that's not true: Director Ratcliffe wrote in a letter to Sen. Lindsey Graham dated September 29, 2020, that the information was "Russian intelligence analysis" and the U.S. intelligence community "does not know the accuracy of this allegation or the extent to which the Russian intelligence analysis may reflect exaggeration or fabrication." The communications director for Sen. Mark Warner, ranking Democrat on the senate intelligence committee, called it "Russian disinformation" that was being "laundered" by Ratcliffe and Graham.

The claim appeared in a post (archived here) shared on Facebook on September 29, 2020, under the title "JUST DECLASSIFIED: The Russia hoax was Hillary's plan, and the Obama-Biden White House was briefed on it." The letter to Graham opened:

In response to your request for Intelligence Community (IC) information related to the
Federal Bureau of Investigation's (FBI) Crossfire Hurricane Investigation, I have declassified the
following:
• In late July 2016, U.S. intelligence agencies obtained insight into Russian intelligence
analysis alleging that U.S. Presidential candidate Hillary Clinton had approved a
campaign plan to stir up a scandal against U.S. Presidential candidate Donald Trump
by tying him to Putin and the Russians' hacking of the Democratic National
Committee. The IC does not know the accuracy of this allegation or the extent to
which the Russian intelligence analysis may reflect exaggeration or fabrication.
• According to his handwritten notes, former Central Intelligence Agency Director
Brennan subsequently briefed President Obama and other senior national security
officials on the intelligence, including the "alleged approval by Hillary Clinton on
July 26, 2016 of a proposal from one of her foreign policy advisors to vilify Donald
Trump by stirring up a scandal claiming interference by Russian security services."
• On 07 September 2016, U.S. intelligence officials forwarded an investigative referral
to FBI Director James Corney and Deputy Assistant Director of Counterintelligence
Peter Strzok regarding "U.S. Presidential candidate Hillary Clinton's approval of a
plan concerning U.S. Presidential candidate Donald Trump and Russian hackers
hampering U.S. elections as a means of distracting the public from her use of a
private mail server."

This is the letter from Ratcliffe. Lead Stories highlighted the director's words that make it clear the U.S. intelligence agencies did not know if what they were hearing from Russian intelligence was accurate, an exxaggertion or a fabrication: 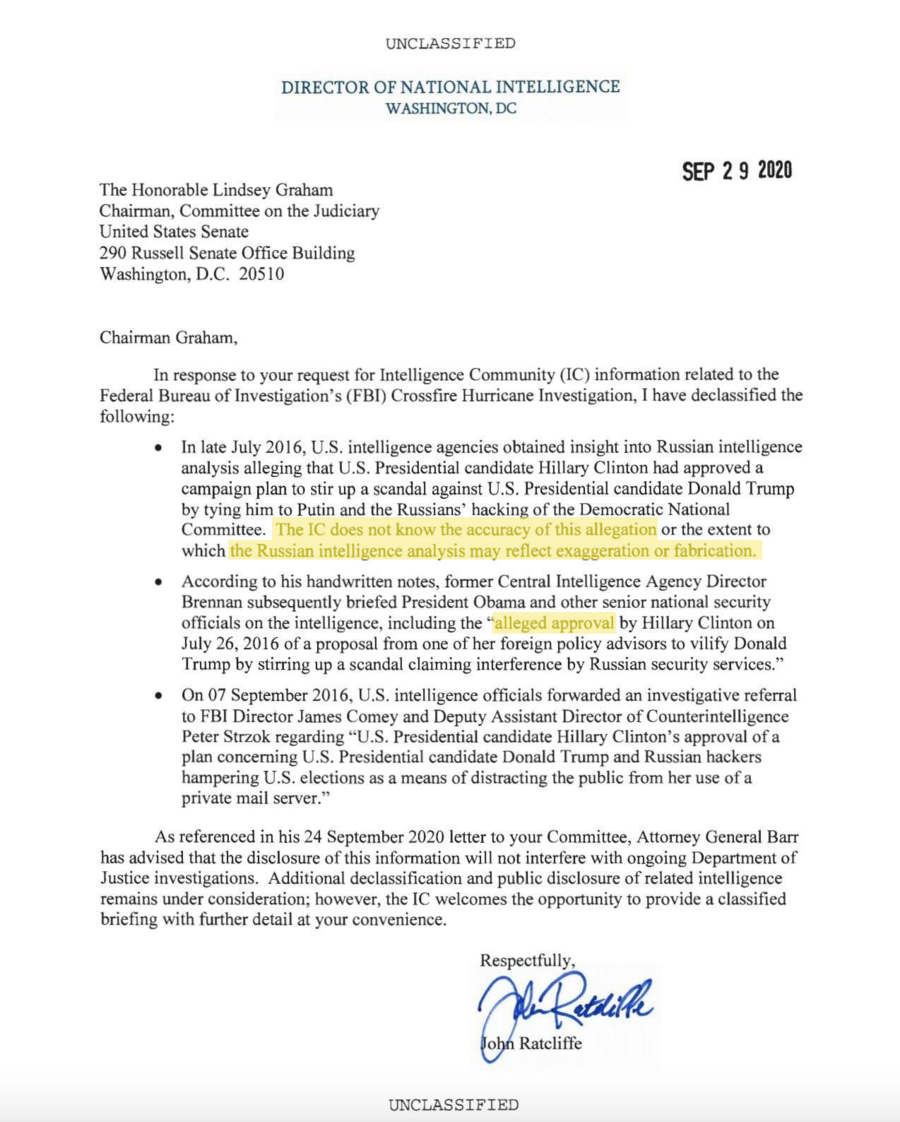 Rachel Cohen, who is communications director for Sen. Warner, tweeted this response:

This is Russian disinformation.

Laundered by the Director Of National Intelligence and Chairman of the Senate Judiciary Committee.

Director Ratcliffe later issued a statement countering the claim that it was "Russian disinformation."

To be clear, this is not Russian disinformation and has not been assessed as such by the Intelligence Community. I'll be briefing Congress on the sensitive sources and methods by which it was obtained in the coming days.