Did Hillary Clinton testify in court on September 9, 2020, for a lawsuit related to her use of private emails for official business while she was secretary of state in the Obama administration or any other matters? No, that's not true. Clinton was not in court in person giving a deposition in the emails case -- the United States Court of Appeals for the District of Columbia ruled on August 14, 2020, that she did not have to give testimony in the lawsuit filed by Judicial Watch, a conservative organization. Clinton did not appear in court on September 9, 2020, for any reason.

The claim appeared as a post (archived here) where it was published on Facebook on September 9, 2020. It opened:

HILLARY CLINTON IS AT COURT TODAY FOR HER INVOLVEMENT IN THE UNDERGROUND CHILD SEX RING, HER EMAILS, CALLS, ANY PROOF IN HER INVOLVEMENT, STAY TUNED GUYS SOMETHING BIG IS GOING TO HAPPEN TO DEFUSE THE NOISE OF WHATS REALLY GOING ON.
DONT LET IT! #SaveOurChildren
EDIT: American times 9th Sept is TOMORROW! please stay tuned

The United States Court of Appeals for the District of Columbia Circuit ruled on August 14, 2020 that Clinton did not have to give a deposition in the emails case filed by Judicial Watch. Politico covered the story as did CNN.

The false post claims: "HILLARY CLINTON IS AT COURT TODAY FOR HER INVOLVEMENT IN THE UNDERGROUND CHILD SEX RING, HER EMAILS, CALLS, ANY PROOF IN HER INVOLVEMENT..."

Clinton was not in court in connection with a purported "underground child sex ring." This is a false claim made by QAnon followers and Pizzagate conspiracy theorists who claim without any evidence that Clinton and other high level officials and Hollywood stars are pedophiles who are abusing and sometimes sacrificing children.

The ruling in the emails case noted that Clinton was granted her petition from June 2, 2020, not to give the deposition.

United States Court of Appeals FOR THE DISTRICT OF COLUMBIA CIRCUIT Argued June 2, 2020 Decided August 14, 2020 No. 20-5056 IN RE: HILLARY RODHAM CLINTON AND CHERYL MILLS, PETITIONERS On Petition for Writ of Mandamus

WILKINS, Circuit Judge: This petition arises from a Freedom of Information Act ("FOIA") case brought by Judicial Watch, Inc. against the U.S. Department of State. See Judicial Watch, Inc. v. Dep't of State, No. 1:14-cv-1242 (D.D.C. filed July 21, 2014). Petitioners are former Secretary of State Hillary Rodham Clinton (a third-party intervenor in the case), and Secretary Clinton's former Chief of Staff, Cheryl Mills (a nonparty respondent in the case). On March 2, 2020, the District Court granted Judicial Watch's request to depose each Petitioner on a limited set of topics. On March 13, 2020, Secretary Clinton and Ms. Mills petitioned this Court for a writ of mandamus to prevent the ordered depositions. For the reasons detailed herein, we grant the petition in part and deny it in part - finding that although Secretary Clinton meets all three requirements for mandamus, Ms. Mills does not - and remand the case for proceedings consistent with this opinion. See Cheney v. U.S. Dist. Court, 542 U.S. 367, 380 (2004)."

This is a screenshot of the court documents: 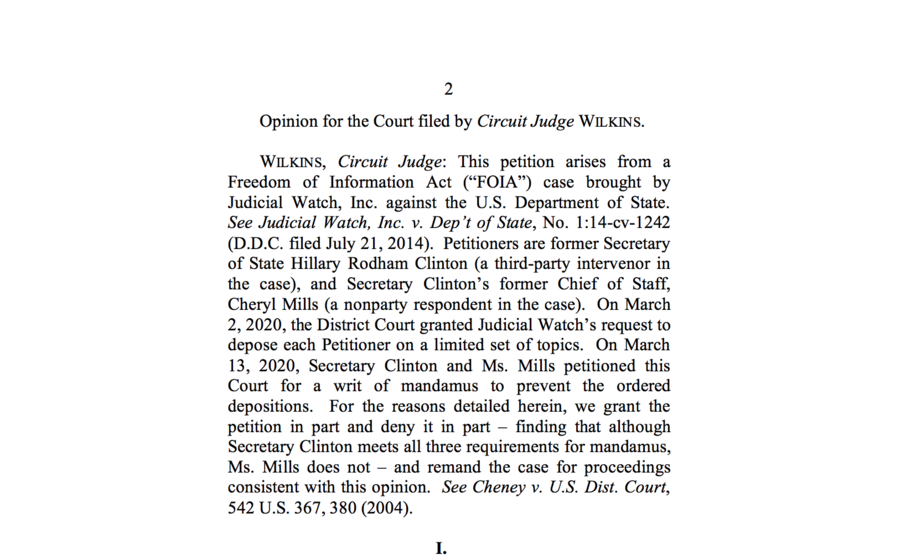 Page 13 of the ruling noted why Clinton was not ordered to give the deposition:

Here, the District Court ordered Secretary Clinton's deposition primarily to probe her motives for using a private email server and her understanding of the State Department's records-management obligations. See Mem. Order at 10, ECF No. 161. However, neither of these topics is relevant to the only outstanding issue in this FOIA litigation - whether the State Department has conducted an adequate search for talking points provided to Ambassador Rice following the September 11, 2012 attack in Benghazi, or for any communications or records related to those specific talking points. See Compl. at ¶ 5, ECF No. 1. The proposed inquiries are not, as Judicial Watch insists, "vital to determining the adequacy of the search for records at issue in [its] FOIA request," Pl.'s Reply at 10, No. 1:14-cv-1242, ECF No. 144 (Oct. 3, 2019), and we find there is little reason to believe that the information sought will be relevant to a claim or defense as required by Rule 26. See AF Holdings, 752 F.3d at 995 (finding discovery improper where the information sought would not meet the Rule 26 standard and would "be of little use" in the lawsuit)."

The history of the claim that Clinton would have to sit for a deposition in the emails case came when Judge Royce Lamberth ordered her to sit for a sworn deposition on March 2, 2020. Politico covered the order in a March 2, 2020, article titled "Judge orders Hillary Clinton deposition in email flap." CNBC also covered the story on the same day with an article titled, "Hillary Clinton must testify in email case, judge rules."

On June 2, 2020, a hearing was held via conference call between the parties, with the appeals court considering the case but not making a ruling, as Lead Stories previously reported.

The real purpose of the depositions is harassment. It's the creation of video footage that can be used for partisan, political attack ads. It's social media fundraising.