Did LeBron James and Anthony Davis, the Los Angeles Lakers' leading scorers this season, wear lace collars to honor the life of Supreme Court Justice Ruth Bader Ginsburg after her death? No, that's not true: This is a satirical claim published by a known satire website. Neither James, Davis, nor any other NBA players have worn lace collars in the couple games that have happened since her death.

LOS ANGELES, CA--NBA players are honoring the life of Ruth Bader Ginsburg this week by wearing pretty lace collars just like Notorious RBG used to wear. In a touching show of respect for the late Justice Ginsburg, and in solidarity with her progressive cause, Lebron James and the LA Lakers took to the court yesterday wearing a stunning variety of delicate white collars inspired by RBG's wardrobe.

LOS ANGELES, CA--NBA players are honoring the life of Ruth Bader Ginsburg this week by wearing pretty lace collars just like Notorious RBG used to wear. In a touching show of respect for the late Justice Ginsburg, and in solidarity with her progressive cause, Lebron James and the LA Lakers took to the court yesterday wearing a stunning variety o ...

The following is the actual shot of James and Davis which does not feature the photoshopped lace collars: 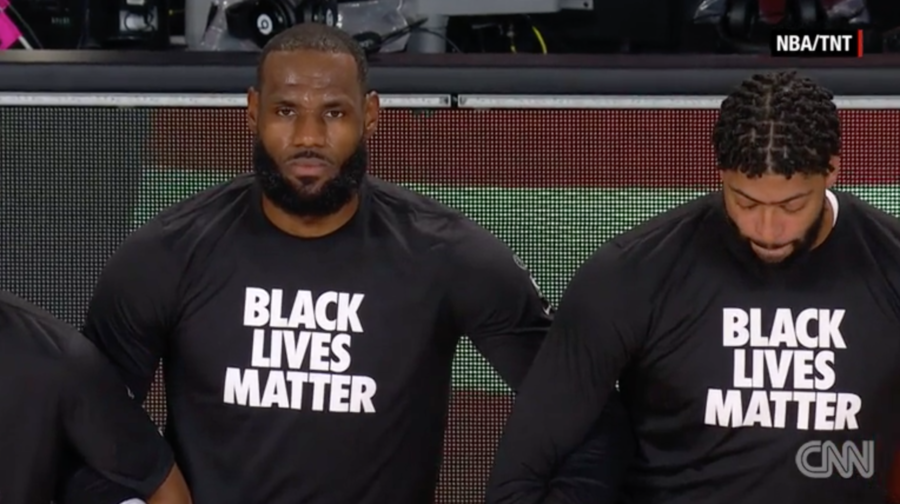 A clip of the pregame coverage that this shot appeared in can be found here.

The site has been feuding with Snopes and CNN in the recent past over accusations that wasn't being transparent enough about being satirical:

At Lead Stories we are big fans of satire but in accordance with our Satire Policy we sometimes fact-check satirical content if it seems there are many people who don't get the joke (or if the joke gets stolen by Macedonian fake news sites and is then presented as "news"). To quote from our Satire Policy: