Did House Speaker Nancy Pelosi say that she wants to remove votes from soldiers overseas? No, that's not true: The story was published by a satire site known for trolling conservatives with unbelievable claims, hoping they will believe them and share. The story was then copied, shared and commented on by people who apparently thought it was real.

The claim originated in an article (archived here) published by americaslastlineofdefense.com on August 11, 2020, under the title "Pelosi Wants To Remove Votes From Soldiers Overseas: 'They Don't Even Live Here'". It opened:

It has long been established that Democrats cheat in order to win elections. They have undocumented citizens cast votes for them, they have dead people vote for them, have people of color vote for them, and the list goes on and on.

No, they have sunk to a new low. Nancy Pelosi and her cronies seek to disrespect our troops even more than they have thus far through defunding and constant criticism of heroic acts. Pelosi announced today that she intends to bring forth a new bill that would disqualify members of the military who serve overseas from voting in the coming presidential election.

This is what the social media users saw:

"Some of these young men and women have been out of country for years. Why should they get to vote? They don't even live here."

On the satire site, it's clear the claim is a joke. But some people who saw the headline on social media apparently thought the story was real.

A screenshot of the satire article was turned into a meme, without the obvious satire warnings. This is one example: 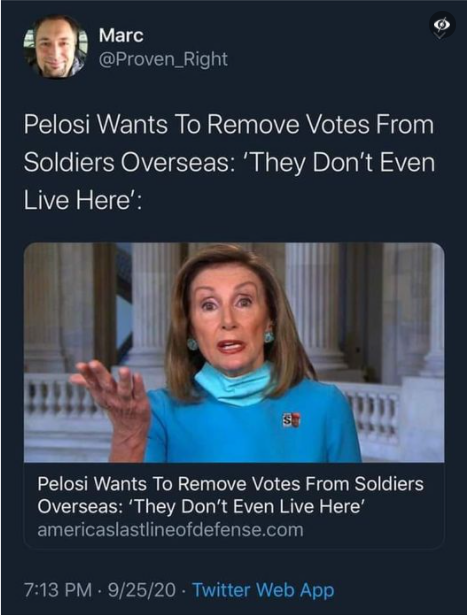 Crazy traitor! You are not qualified to represent The United States with ideas like this!

Honestly-----HOW STUPID IS SHE???? Never mind, I know!! She tells us every time she opens her mouth. What a terrible thing to say about our soldiers who are protecting us.

The satire site is part of the "America's Last Line of Defense" network of websites run by self-professed liberal troll Christopher Blair from Maine, along with a loose confederation of friends and allies. He runs several websites and Facebook pages with visible satire disclaimers everywhere. They mostly publish made-up stories with headlines specifically created to trigger Republicans, conservatives and evangelical Christians into angrily sharing or commenting on the story on Facebook without actually reading the full article, exposing them to mockery and ridicule by fans of the sites and pages.

Every site in the network has an "about" page that reads (in part):

Articles from Blair's sites frequently get copied by "real" fake news sites that omit the satire disclaimer and other hints the stories are fake. One of the most persistent networks of such sites is run by a man from Pakistan named Kashif Shahzad Khokhar (aka "DashiKashi"), who has spammed hundreds of such stolen stories into conservative and right-wing Facebook pages in order to profit from the ad revenue.