Did the Republican Party make a last-minute substitution, replacing Vice President Mike Pence on the ballot with John F. Kennedy Jr.? No, that's not possible: Kennedy, his wife and sister-in-law died when the small plane he was piloting crashed into the Atlantic Ocean near Martha's Vineyard, Massachusetts in July 1999.

QAnon followers believe Kennedy, Jr. faked his own death (and that of his wife and sister-in-law) so he could hide out for 20 years and return to help Trump battle the "Deep State" and avenge the assassination of his father, the 35th President of the United States.

A National Transportation Safety Board investigation concluded that JFK Jr., 38, his wife Carolyn Bessette-Kennedy, 33, and her sister Lauren Bessette, 34, died from injuries suffered in the crash, which the NTSB blamed on piloting errors by Kennedy. A Massachusetts coroner confirmed their identifies and cause of death.

QAnon followers, whom the FBI has labelled a possible domestic terror threat, have several times predicted the re-appearance of JFK, Jr., most recently saying he provided voice-over at Mt. Rushmore July, 3, 2020, during a Trump 2020 campaign rally.

The prediction Kennedy would appear October 17, 2020, to take his place with Trump on the ballot appeared in a series of countdown tweets (archived here) on the @HSRetoucher Twitter feed since September 20, 2020 under the title "Mark your calendars." It opened:

This tweet repeated the claim that JFK Jr. would be revealed at a Trump rally on Saturday, October 17 as alive and on the Trump 2020 ticket:

Big day in the "JFK Jr lives" sect of QAnon as the man himself is expected to reveal himself and replace Pence as Trump's running mate at the Dallas rally. pic.twitter.com/mUFkjk6mk2

It should be noted that President Trump held a rally in Michigan -- not Texas -- on October 17. He did mentioned JFK Sr. twice in his speech, but there was no reference to JFK Jr.

The QAnon belief that Trump will replace Pence with the late JFK Jr. appears undimmed by repeated predictions that don't come true and "sightings" that are easily debunked, as in this Lead Stories fact-check from 2019: Fake News: JFK Jr. Is NOT Alive And Will Not Replace Vice President Pence as Donald Trump's 2020 Running Mate.

The idea that JFK Jr. will return to life has been dismissed in mainstream media as an elaborate ruse to make its followers appear foolish, but to those who believe that President Trump has been secretly working with Kennedy to defeat the "Deep State," it is gospel. QAnon believers now include candidates for public office, some endorsed by President Trump.

The myth of JFK Jr.'s resurrection began around April 2018 with a series of "Q drops" on the 8Chan online forum. QAnon followers have since created countless posts offering interpretations of the cryptic messages from "Q," including a video published on YouTube on July 7, 2019 under the title "JFK JR IS HERE...".

Some who believe John F. Kennedy Jr. is alive also believe he sends them coded messages, signed "Q." Hence, the nickname for the movement: QAnon. Members are typically hardcore supporters of Donald Trump and believe Kennedy's plan has been to hide out in order to seek revenge for the "Deep State's" assassination of his father in Dallas, Texas, on November 22, 1963. The belief in a government conspiracy to kill Kennedy is fueled by the enduring popularity of Oliver Stone's 1991 film, "JFK" which posits, without evidence, that the CIA killed Kennedy.

JFK Jr., QAnon believers say, conspired with Trump in 1999 on a long-range plan to destroy those conspiracists, the "Deep State," led by Trump enemies including the Bush, Clinton and Obama families. They point to a quote in which JFK Jr. is said to have praised Trump in 1999 as evidence of the alliance, but Lead Stories found that quote was fake. Read: "Fake News: JFK Jr. Did NOT Write In 1999 Donald Trump As President Would Be An Unstoppable Force For Ultimate Justice"

QAnon believers anticipated Trump's 2019 4th of July event in Washington, D.C., would feature the dramatic appearance of JFK Jr. and the announcement that he would replace Vice President Pence as his 2020 running mate.

While there was disappointment when it didn't happen, QAnon followers insisted JFK Jr. was there at the 4th of July event, but stood down because of an assassination plot against Trump. One video even included a purported photo of JFK Jr. at the Trump Hotel in Washington, disguised as a Pittsburgh man named Vincent Fusca: 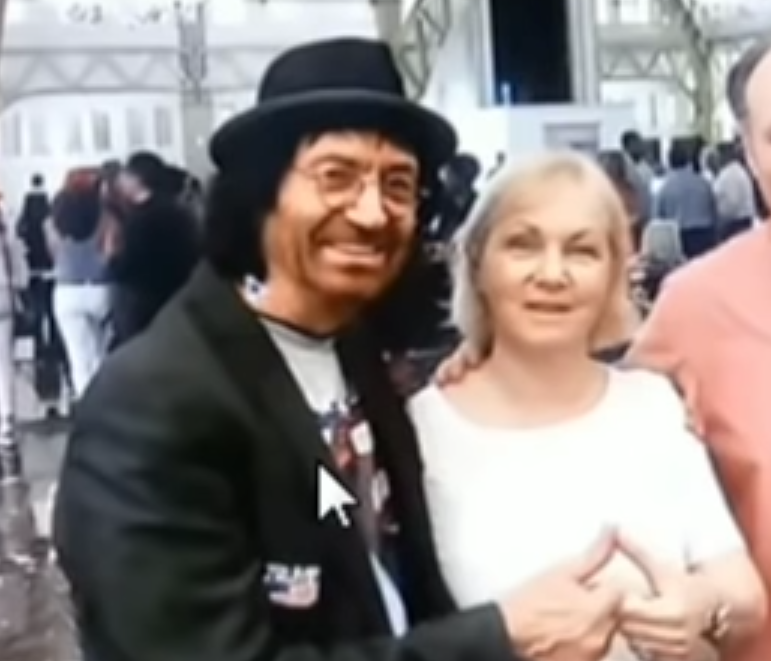 This photo is purportedly John F. Kennedy Jr. at Trump Hotel on July 4, 2019. He would be 58. The subject has been identified as Vincent Fusca, a Pittsburgh man who frequently attends Trump campaign rallies. Fusca's Twitter account suggests that he enjoys the speculation that he is JFK Jr.:

QAnon followers get their messages through a variety of social media, including Twitter, Facebook, and a list of smaller platforms. Q's original method for "Q drops," 8Chan, was taken offline in the aftermath of the El Paso, Texas, mass shooting of August 3, 2019. The shooting suspect used the platform to post his "manifesto," renewing criticism it had become a megaphone for mass shooters, and a recruiting platform for violent white nationalists," the New York Times reported.

This thread from the Twitter account of QAnon blogger George Colgrove III summarizes how he believes John F. Kennedy Jr. staged his death so he could 20 years later return to help Trump battle the dark forces of the Deep State:

On this 20th Anniversary of The "Start" I decided to get into the trenches to explain why I believe JFK Jr. faked his death. I present this not to "prove" he's alive. I present this so one could see a pragmatic story of how a man who was targeted by the DS, whose family members were also targeted by the DS. This story opens up with my understanding of Q. There is no doubt that Q is interwoven within the John F. Kennedy story. There is a strong sense that the fuel behind Q is the assassination of Kennedy. Q also revealed in Q-Post 1082, that JFK Jr.'s plane crash initiated the beginning of Q. So in essence today at 9:41 pm ET will be the 20th year anniversary of Q.

Scroll down the full thread and you will see the dramatic details of how JFK Jr. parachuted from the small plane before it slammed into the ocean -- and how co-conspirators in the government placed three cadavers in the wreckage to make it appear that he, his wife, and her sister were killed:

On this 20th Anniversary of The "Start" I decided to get into the trenches to explain why I believe JFK Jr. faked his death. I present this not to "prove" he's alive. I present this so one could see a pragmatic story of how a man who was targeted by the DS, whose family ...

The National Transportation Safety Board released its full investigative report into the plane accident in which Kennedy, wife Carolyn Bessette-Kennedy, and sister-in-law Lauren Bessette perished on July 19, 1999. You can read and download it here. The NTSB concluded that Kennedy, who was relatively inexperienced as a pilot flying above water at night, became disoriented and made mistakes that caused the small aircraft to crash into the Atlantic Ocean approximately 7 1/2 miles southwest of Gay Head, Martha's Vineyard, Massachusetts. It was blamed on pilot error due to "spatial disorientation."

The AC (FAA Advisory Circular) states that an illusion or false impression occurs when information provided by sensory organs is misinterpreted or inadequate and that many illusions in flight could be created by complex motions and certain visual scenes encountered under adverse weather conditions and at night. It also states that some illusions may lead to spatial disorientation or the inability to determine accurately the attitude or motion of the aircraft in relation to the earth's surface. The AC also states that spatial disorientation as a result of continued VFR flight into adverse weather conditions is regularly near the top of the cause/factor list in annual statistics on fatal aircraft accidents.

Investigators talked to the certified flight instructor who was still training Kennedy to fly his Piper Saratoga II in such conditions:

Another factor considered in Kennedy's inability to pull the plane out of a dive was a leg injury suffered a month earlier:

According to medical records, on June 1, 1999, the pilot fractured his left ankle in a hang-gliding accident, and on June 2, 1999, he underwent surgical "open reduction internal fixation of left ankle fracture." On June 23, 1999, the pilot's leg was removed from a cast and placed in a "Cam-Walker." On July 15, 1999, the pilot's Cam-Walker was removed, and on July 16, 1999, he was given a "straight cane and instructed in cane usage." The medical records noted that Kennedy was "full-weight bearing with mild antalgic gait."

Flight instructors told the NTSB that they had to assist Kennedy with certain functions in the weeks before because of the injury.

This video offers a good re-enactment of what the NTSB concluded:

The NTSB report also confirmed that a medical examiner conducted autopsies on all three bodies, which would have revealed if the bodies had died earlier in another fashion and were not the victims:

Carolyn's and Lauren's mother sued Kennedy's estate for the wrongful death of her daughters. The estate paid the mom $15 million in a settlement. This raises a question: If JFK Jr. bailed out and lived, what happened to his wife and sister-in-law? Would Kennedy kill them to fake his own death? Did they join the plot? There are no believable answers to these questions except that all three died in the crash.

The Mount Rushmore claim appeared in a video posted by the "Alice Down the Rabbit Hole" YouTube channel on July 5, 2020, titled "Was that #JFKJR?!!!!"

#JFK revealed himself on July 3 at the July 4 celebration! Is anyone else allowed to be on top of George? #JFKJRLIVES https://t.co/d8CfvnA78I