Did movers carry Trump belongings from the White House while he complained about the election? No, that's not true: This video has been altered to add the moving van and movers in the background. The video of President Trump speaking is authentic, but it does not show him speaking about the election results, rather this video dates back to September 28, 2019. President Trump was speaking a week after House Speaker Nancy Pelosi announced Democratic leaders would be launching an official impeachment inquiry.

The satire video appeared in a post (archived here) where it was published by hiphopuniteddaily on November 14, 2020, with the caption:

The text over the video read: 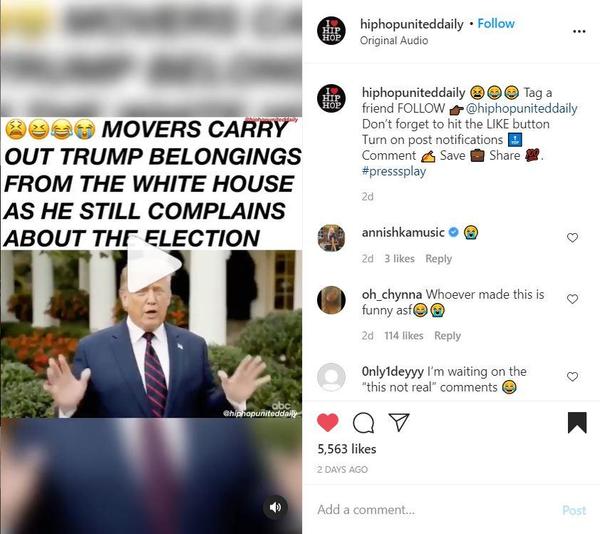 The modified video still bears the logo of the ABC network underneath the @hiphopuniteddaily tag that has been added over it. The satire video has been modified to show a crew of movers carrying things to the moving van. As the movers toss boxes and other objects into the back of the van, pre-recorded laughter is heard in the background.

The portion of the president's actual speech from 2019 included in the satire video says:

On September 28, 2019, President Trump tweeted a short video which includes this specific portion of his speech in the White House Rose Garden.

They are trying to stop ME, because I am fighting for YOU! pic.twitter.com/xiw4jtjkNl