Did then-President-Elect Biden make a protocol blunder as he entered the Capitol building on inauguration day by failing to salute the Marines who were standing by the doors? Had someone tried to coach him through the use of an earpiece and the message failed to register? No, that's not true: It would not have been proper protocol at that time for Biden to have saluted the Marines who were standing by the doors. Photos taken at the time do not reveal any evidence of an earpiece. There is no logical reason to infer that someone had coached him to depart from protocol to salute the Marines.

The claims originate from a short clip taken from a C-Span live broadcast on Inauguration day. The video appears in a post (archived here) where it was published on January 21, 2021. It was captioned:

The moment in question appears approximately 19:49 minutes into this inauguration day C-SPAN video. The audio is muffled, in part because of the face mask President Elect Biden is wearing. Some people speculate that the words said are not, "Salute the Marines," rather, "Good looking Marines." The Marines standing by the doors do not salute as the Bidens approach or pass. This is because Joe Biden was not yet sworn in as president. 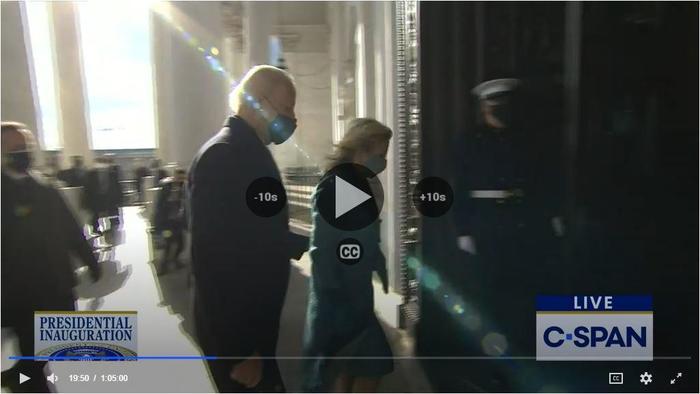 Lead Stories reached out to the Marine Corps media officer for information about the saluting protocol and they explained that Marines always salute the President of the United States, but since he was not officially sworn in at this point, it would not be required.

The purpose of the hand salute is to demonstrate mutual respect and courtesy between members of military organizations and to show respect to national colors.

Unfortunately,due to public misconceptions about saluting protocol, presidents often wind up at the receiving end of unwarranted criticism regarding saluting, and the criticism now comes at them regardless if they do or don't salute. There is no expectation that a president, who is a civilian, should return a salute, and it is perfectly acceptable for them to acknowledge the salute of a service member with a nod, a smile, or a kind word.

For future reference, the Army Manual 600-25 on Salutes, Honors, and Courtesy addresses hand salutes in chapter 2-1 It reads in part:

f. The President of the United States, as the commander in chief, will be saluted by Army personnel in uniform.
g. Civilian personnel, to include civilian guards, are not required to render the hand salute to military personnel or other civilian personnel.
h. Military personnel under arms will render the salute prescribed for the weapon with which they are armed, whether or not that weapon ordinarily is prescribed as part of their equipment.
i. Salutes are not required to be rendered or returned when the senior or subordinate or both are--
(1) In civilian attire.
(2) Engaged in routine work if the salute would interfere.
(3) Carrying articles with both hands so occupied as to make saluting impractical.
(4) Working as a member of a detail or engaged in sports or social functions where saluting would present a safety hazard.

Inauguration day photos of Joe Biden do not show evidence of an earpiece being worn. 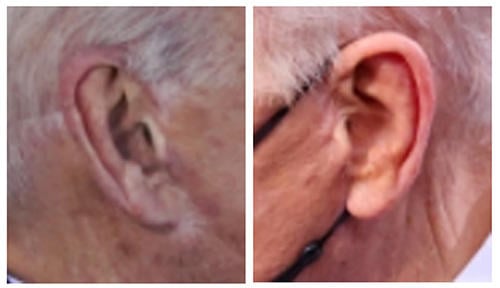