Did Disneyland announce that there will be a new "no scream" policy on theme park rides and that the park would be enforcing this policy? No, that's not true: While there were recommendations that were published by the California Attractions and Parks Association as part of the trade group's "Responsible Reopening Plan" the recommendation did not specify that parks institute a "no scream" policy. Disneyland has not made any public announcements indicating that the park will be instituting or enforcing such a policy.

The meme, which includes a screenshot from a TV news segment, appeared as a post (archived here) on Facebook on March 21, 2021. The text showing in the screen capture of the news segment says:

This is how the post appeared at the time of this writing. 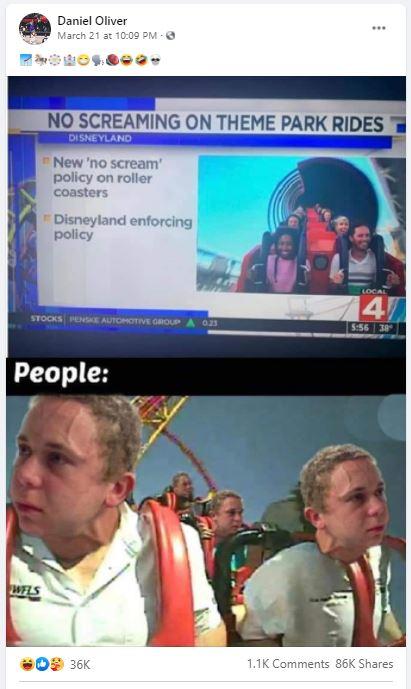 Lead Stories was not able to locate the specific news segment that appears as a screenshot in the meme, but there are other instances of similar news stories incorrectly reporting about a "no screaming" rule at California amusement parks, on TV, online and in other local media.

The state of California has provided guidance to various industries to help protect workers and customers from COVID-19. This is called the Blueprint for a Safer Economy. The section on amusement and theme parks points to a 20-page pdf document from the California Department of Public Health that was published in October of 2020. This document, which addresses theme park considerations such as food concessions and disinfecting protocols, includes 18 very specific points about theme park rides. First on the list and repeated many times in the document are mandatory face coverings for visitors and employees. There are other considerations listed such as plexiglass dividers on switchback queues and that family groups can be seated together on a ride. There is no mention in this document of a "no screaming" policy.

The California Attractions and Parks Association has published its own Responsible Reopening Plan in preparation for the time when California parks would be authorized to reopen. Within this document are eight points for "Meeting the Blueprint's Criteria for Determining Risk." The last point in the list is the one that may have been interpreted as a "no screaming" rule -- but the recommendation stops well before recommending a "no screaming" policy. The recommendations emphasize face coverings and spaced seating on rides:

Disneyland Park and Disney California Adventure park have announced they will reopen to California state residents on April 30, 2021. Disneyland has published information about how they are planning to accommodate guests while also taking precautions that follow guidance from the Centers for Disease Control and Prevention and appropriate government agencies. Disneyland has not publicly announced a "no screaming" policy.

Lead Stories reached out to Disneyland by email and will update this article, if appropriate, when they reply.