Are National Guard troops guarding the Capitol forced to sleep on the floor? No, that's not true. The men and women serving in the National Guard on the DC Mission have hotel rooms and other accommodations. The images Donald Trump Jr. used in the video of troop members on the floor are from January 13, 2021, and are not current photographs at the time of this writing on March 30, 2021. National Guards members were on shift guarding the Capitol building after the January 6, 2021 insurrection. They were not sleeping in the Capitol overnight and were provided with housing. That situation has not changed, Lead Stories confirmed. "Soldiers and airmen that are on the DC Mission supporting the Capitol Police are provided designated rest areas by the lead agency where they can rest during their shifts," Us Air Force Major Matt Murphy, spokesperson, National Guard Bureau Public Affairs said. Off-duty troops are being housed in hotel rooms or other comfortable accommodations.

The claim appeared as a video published by Donald Trump Jr. on Rumble on March 25, 2021, titled "Joe Biden Gives Illegals Hotels While Our Troops Sleep on the Floor!" (archived here), which opened:

Joe Biden made sure illegals got hotels while National Guard troops slept on the floor. This is truly sick!

Joe Biden Gives Illegals Hotels While Our Troops Sleep on the Floor!

Joe Biden made sure illegals got hotels while National Guard troops slept on the floor. This is truly sick!

Guys, I'm at a loss for words. And that doesn't happen often, as many of you guys know.
It seems that Jen Psaki, Joe Biden's press secretary is also at a loss for words as she struggles to explain why illegal immigrants coming into this country and breaking our laws get hotel rooms. Paid for by you, the American taxpayer, while our National Guard, guarding D.C., which I don't know that anyone believes is actually something that needs to be done anymore. I'm sure there's a couple people, only on the left that agrees it must be done. While they sleep on a cold hard floor."

The photographs used are Reuters photos from January 13, 2021. They were published on multiple news outlets at the time.

Here are two screengrabs from Trump Jr.'s video, each followed by the original photographs offered by Reuters' online catalogue: 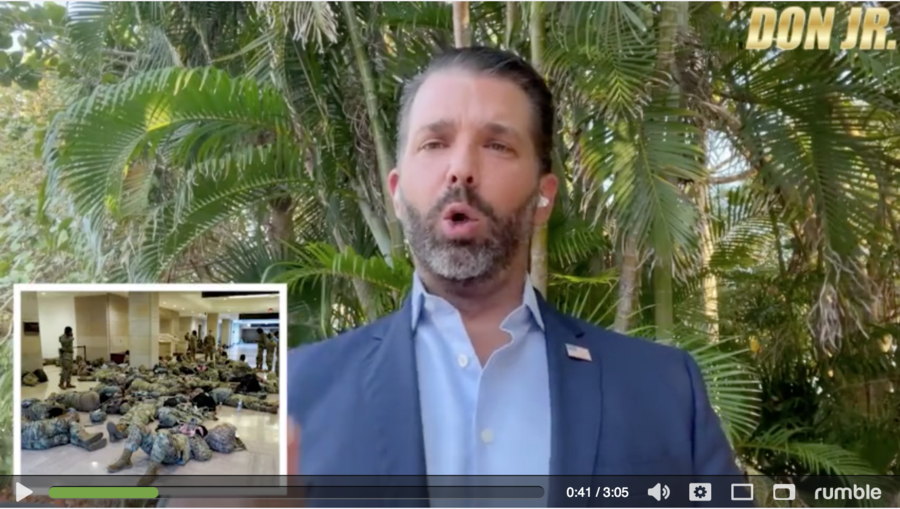 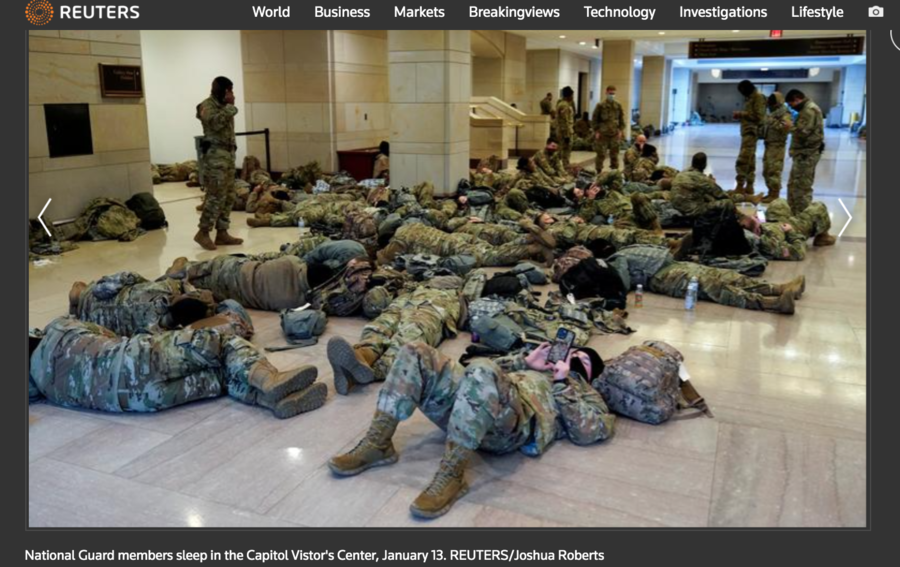 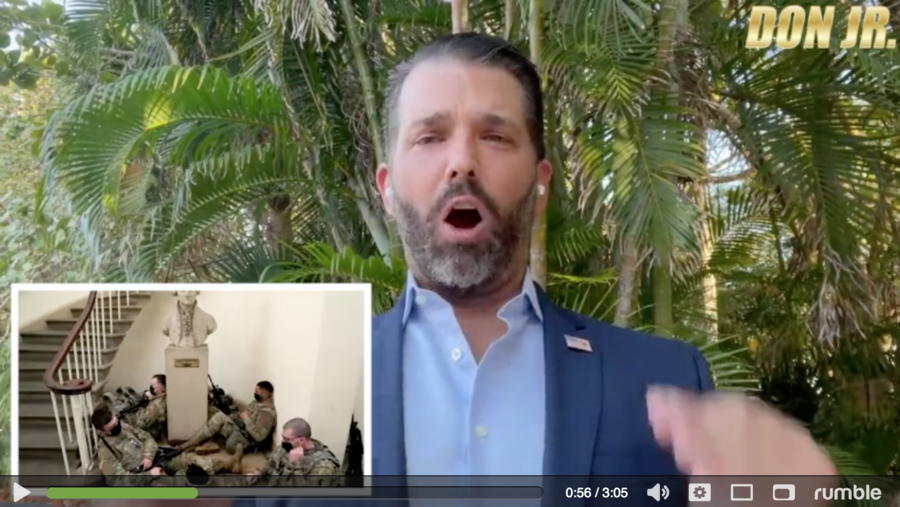 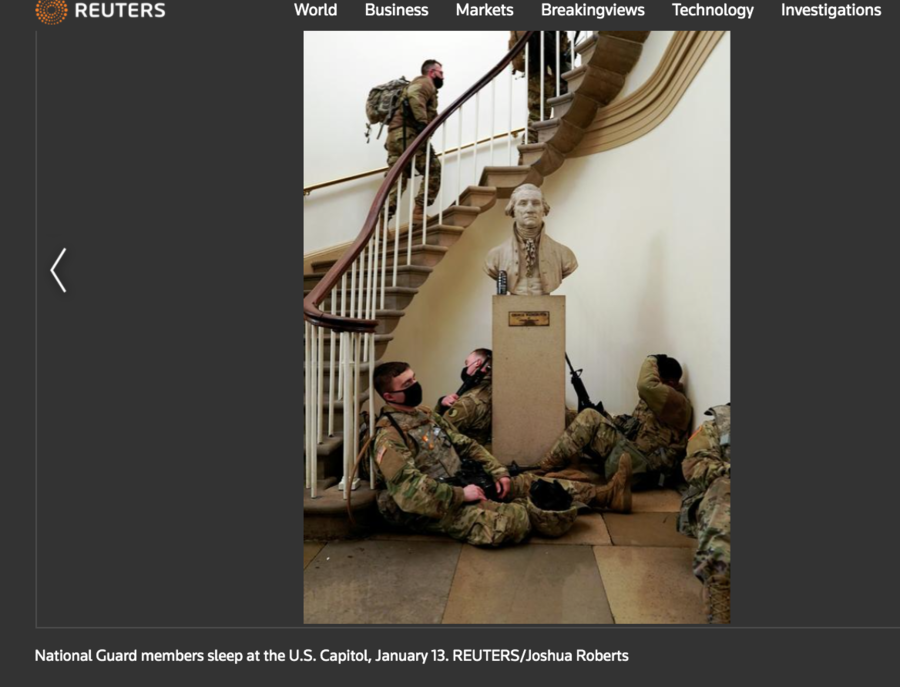 Murphy, the National Guard spokesman, told Lead Stories via telephone on March 30, 2021, the troops are still housed in "hotel rooms and other comfortable accommodations," as the Guard's January 22, 2021, press release stated. Lead Stories previously published a debunk of the claims that the troops were forced to sleep on the floor of the Capitol building.

"Based on their shift work they still have rest periods," Murphy said. "They are still catching naps in between their shifts wherever they have been designated to do this. There is nothing new."

The National Guard and the US Capitol Police released a joint statement about the situation in January 2021:

The USCP and the National Guard have coordinated their efforts to ensure that National Guardsmen and women are stationed throughout the Capitol Complex are in appropriate spaces within Congressional buildings, including the U.S. Capitol, where they may take on-duty breaks. Off-duty troops are being housed in hotel rooms or other comfortable accommodations." 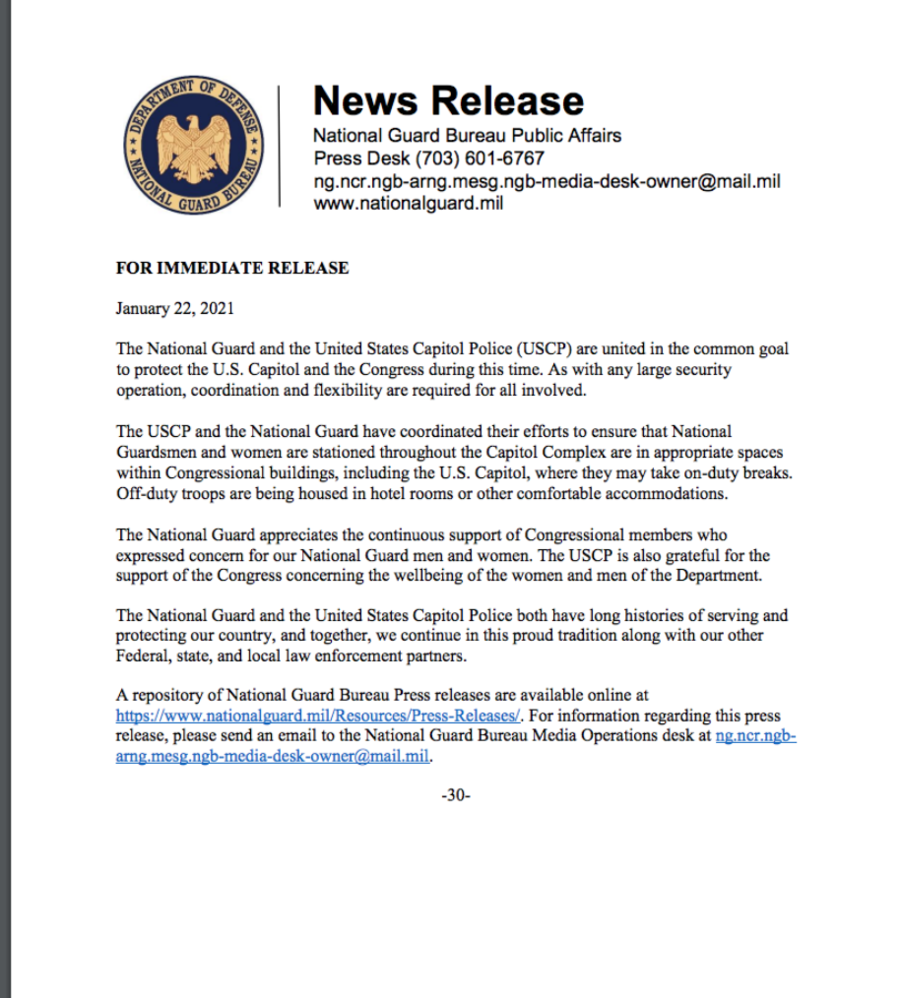