Was Oprah Winfrey wearing an ankle monitor during her interview with Meghan Markle and Prince Harry? No, that's not true. Video shows the billionaire TV mogul was wearing a pair of boots on which creases and folds naturally moved as she changed position during her March 7, 2021, interview with the royal couple that aired on CBS. Nicole Nichols, spokesperson for Winfrey's company, HARPO Productions, told Lead Stories the claim was "completely untrue."

The claim appeared as a post (archived here) where it was published on Facebook on March 8, 2021. It opened:

There is no way in hell that this interview with Oprah would ever have happened if patriots wernt in control. Oprah, Harry and meghan are all heavily Cabal.

Oprah showing her ankle monitor loud and proud in this interview.

The entire caption above the photos read:

There is no way in hell that this interview with Oprah would ever have happened if patriots wernt in control. Oprah, Harry and meghan are all heavily Cabal.

Oprah showing her ankle monitor loud and proud in this interview.

I said a year ago there will be no more royals after this and that they had to leave the Palace it wasn't by choice.

Their family crest was removed from the Palace gates and has never been put back.

Good riddance to the lot of them

In the photographs on Facebook, Winfrey is wearing a pair of boots that crinkle around her legs and the picture is cropped to focus on a bulbous fold on the side of her boot. 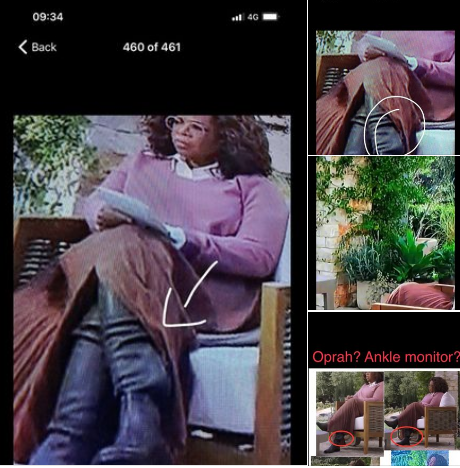 Video of the CBS interview shows Winfrey wearing the boots and moving her legs throughout her conversation with the royal couple. Her legs move and the folds and creases in the boots move as well. If she were wearing the kind of ankle-mounted monitor criminal defendants wear when released to await trial or when on parole, the lump would stay in one place and would not change shape.

Nichols emailed Lead Stories on March 12, 2021, denying the claim that Winfrey was wearing an ankle monitor hidden in her boot.

Lead Stories checked and found no public records of Winfrey being arrested in Santa Barbara County, California; Maui, Hawaii; or any other jurisdiction, nor being required to wear an ankle monitor.

This is not the first time there have been claims or implications that she was arrested. In March 2020 Winfrey herself addressed the unfounded rumor that she had been arrested, tweeting about the false claim.

Just got a phone call that my name is trending. And being trolled for some awful FAKE thing. It's NOT TRUE. Haven't been raided, or arrested. Just sanitizing and self distancing with the rest of the world. Stay safe everybody.🙏🏾

The statement that Winfrey and the Duke and Duchess of Sussex are all "heavily Cabal," is a false narrative perpetuated by the QAnon conspiracy theory. QAnon followers believe there is a global network of Democrats, Hollywood elites and royals involved in a child sex trafficking ring. Lead Stories and other national news outlets, like the New York Times, have debunked this story.

Over the last few years, QAnon followers have claimed other well-known people, including Joe Biden, Hillary Clinton and John McCain were wearing ankle monitors. Those claims have all been debunked by Lead Stories other outlets.