The prankster's Wikipedia vandalism eventually showed up in a video posted on Rumble by RedPillTheWorld. This video was then re-uploaded to Facebook. The mirrored video (archived here) was published on Facebook by Anya Feather Head on March 21, 2021. The video's title is, "RICHARD GRENELL POTUS OF MILITARY OCCUPATION 11.11 ARRESTS-DC WALL COMING DOWN! HAPPY SPRING 3-20-21." The caption that appears on this video and most mirrored content posts on Anya Featherhead's page is:

Some news being covered by the content creators who are silenced now on big platforms and have had to look elsewhere to speak their truth and report on things we as a society need to know. The choice to know will be yours. That's Gods law 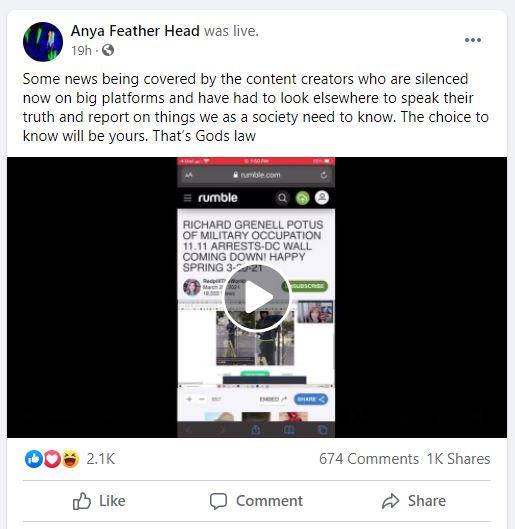 Richard Grenell is a diplomat who has held a variety of roles in his career. From 2018- 2020 he was the U.S. ambassador to Germany and also for a brief time he held the position of acting director of National Intelligence in the Trump administration. This was for approximately one month in early 2020. The Office of the Director of National Intelligence is a Cabinet-level position that is confirmed by the Senate. Grenell was not confirmed in the brief period of time he served as the acting director. Early in the video the narrator, "Melissa RedPillTheWorld," claims that Grenell was the head of military intelligence and that an "operation" is underway, to seize control of the government, a common theme in QAnon conspiracy theories. The office Grenell held is not called "head of military intelligence." Melissa RedPillTheWorld explains the basics of her theory early in the video:

We know that this operation is a military intelligence operation. We know that, and that this information about the proof of the election fraud was given to the military. The military intelligence has been acting upon that.
The beginning of it, when we went up on January 6th demanding that we have a government that was run by the rule of law- and then immediately the fencing was put up. Right? Ostensibly [the fencing was] to protect from all of us... you know- uh, insurrectionists... but the reality is Richard Grenell has been leading this operation, and even Google has it on there now- for some reason it's not on DuckDuckGo.

The process of obscuring the source of information is called 'information laundering'. The prankster's edit to Richard Grenell's Wikipedia page, falsely identifying him as president of the United States of America was reflected in the "knowledge panel" that usually appears at the top of Google search results. The information Google includes in that panel frequently, but not always, comes from Wikipedia entries. Screenshots of Saturday's Google knowledge panel from searches for either Grenell or president of the United States continue to circulate even after the Wikipedia article was corrected. DuckDuckGo's search results did not reflect the Wikipedia prank because that search engine does not have the same "knowledge panel" feature as Google.

The Wikipedia entry for Grenell was edited on Saturday, at 13:58 (1:58 p.m.) on March 20, 2021,‎ by an account named "Qwashere2021". All edits to Wikipedia pages are recorded. Below is a screenshot of Wikipedia's record of the change that was made by Qwashere2021. 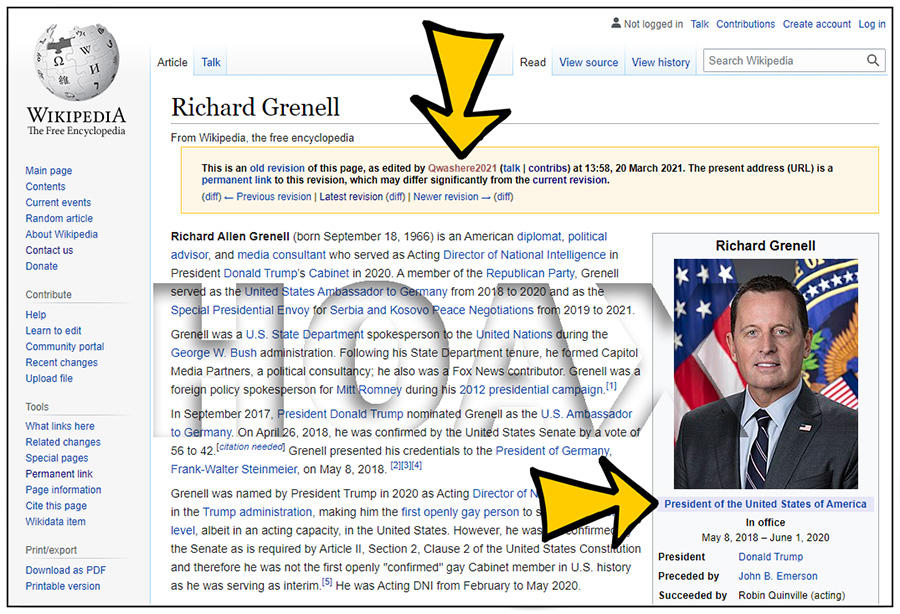 When the news that he was appearing in Google search results as the president of the United States reached him, Grenell responded by posting on Twitter about the things he would do as president. This included running up stairs without tripping, building a LNG (Liquid Natural Gas) terminal, desalinization plants and nuclear power plants all in California and for Eric Swalwell, a Democratic congressman from California, to lose his security clearance.

I hereby order an LNG terminal to be built ASAP on the West Coast of the United States (preferably in California). https://t.co/cIY3cOb2Fc

I hereby order multiple desalinization plants to be built in California.

And I also hereby order new Nuclear power plants to be built in California.

Melissa RedPillTheWorld makes a variety of claims in the video that spring from a refusal to accept that Joe Biden is the president of the United States, and she folds in the hoax information from the Wikipedia prank over the weekend, that Richard Grenell is the president. She claims that Grenell is leading the National Guard in a military occupation of the United States Capitol. She references the Law of War Manual from the Department of Defense and cites particular sections about occupied territory from the manual to try to add credibility to her theories.

Lead Stories reached out by email to the National Guard Bureau of Public Affairs for a statement. We asked three questions: