Is Bill Gates fighting to keep the ingredients of COVID-19 vaccines secret? No, that's not true: The ingredients to each COVID-19 vaccine currently in use are not secret. They are publicly available, including on the FDA website. Gates, a billionaire philanthropist and founder of Microsoft, does not own any of the vaccine patents. The claim that he does control them and is fighting to keep them secret is a distortion of what he said in an April 2021 interview when asked if he thought it "would be helpful" to lift intellectual property rights protections on the vaccines.

The claim appeared in a post (archived here) shared on the "I Love my President Donald Trump" Facebook page on April 27, 2021 under the title "BILL GATES FIGHTS TO KEEP VACCINE INGREDIENTS SECRET". It's an InfoWars segment that opened with a 90-second clip of the Gates interview, followed by host Alex Jones saying:

Billionaire Bill Gates says no to sharing vaccine recipes with poor countries. Well, that's because he doesn't want people to know what's in them. These are experimental. They're not even telling us. They're saying it's proprietary. This is a recipe for total disaster. What do you make of Bill Gates wanting to keep all these vaccines he's helping produce secret. I mean, A, how does he have the power to do that? It shows he's in charge of everything and then, B, that's just another illustration of just how secretive this is. 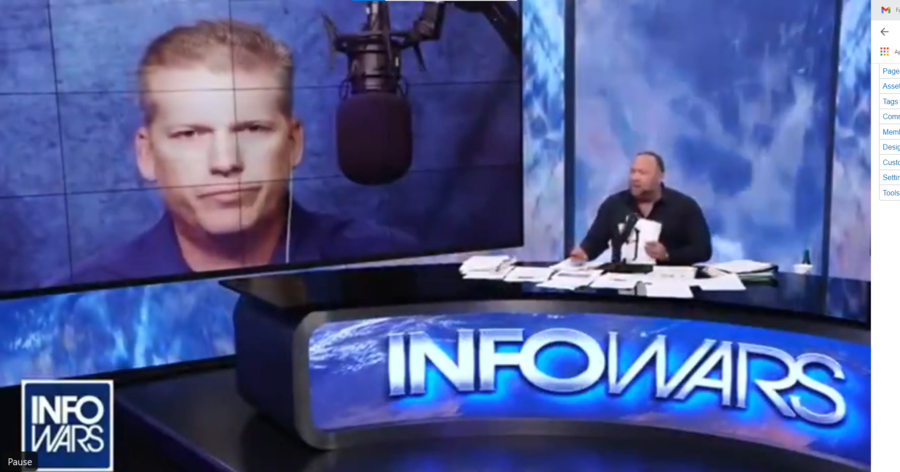 Well, it's very clear that they are putting things in these vaccines that if people knew what was in there, they would not take them. And by the way, part of the emergency authorization use that was granted by the FDA allows vaccine manufacturers to not tell the public what ingredients they're using. That's actually part of that emergency authorization protocol, so they can skip the normal requirements for complete disclosure, which means we absolutely do not know what's in these vaccines.

Smith, publisher of the conspiracy theory website NaturalNews.com, also alleged that the vaccine is the leading cause of deaths in 2021, which Lead Stories has debunked, and that the goal of the vaccine is to "exterminate as many people as possible, their goal is billions," -- another false claim we have debunked.

While the InfoWar segment focuses on the conspiracy theory that Gates wants to keep vaccine ingredients secret so that a diabolical plan to depopulate the world can be successful, others make the false claim that Gates is wanting to keep the secrets for profit reasons. Lead Stories previously debunked the claim that Gates would own the patents for a vaccine and would personally profit from them.

Debunking the claim that Gates -- or anyone is trying to keep vaccine ingredients a secret -- is easily done by sharing the link to the FDA web page titled Frequently Asked Questions about COVID-19 Vaccination. It includes an answer to the question "What are the ingredients to the COVID-19 vaccines?" A click will lead you to this:

Vaccine ingredients can vary by manufacturer. To learn more about the ingredients in authorized COVID-19 vaccines, see

Click on each link will take you to a page listing the ingredients of each of the three vaccines currently approved for use in the United States.

What did Gates really say? A Sky News host asked if Gates thought it "would be helpful" to have vaccine recipes be shared. He replied no, and explained:

"Well, there's only so many vaccine factories in the world and people are very serious about the safety of vaccines. And so moving something that had never been done -- moving a vaccine, from, say, a J&J [Johnson & Johnson] factory into a factory in India -- that is novel -- it's only because of our grants and expertise that that can happen at all. The thing that's hilding things back in this case is not intellectual property. It's not like there's some idle vaccine factory, with regulatory approval, that makes magically safe vaccines. You know, you've got to do the trials on these things and every manufacturing process has to be looked at in a very careful way."

In other words, you could have the "recipe" and ingredients, but unless you have the proper manufacturing infrastructure with experienced staff, you would not be able to reproduce a safe and usable vaccine.

You can watch the full interview here: