Was Daunte Wright pulled over by police because he had an air freshener hanging from his mirror? No, that's not true: Police have said that they stopped Wright because of expired tags, and that it was when officers approached the vehicle that they saw something hanging from his rearview mirror, which is a violation of Minnesota safe driving laws.

The claim appeared in an Instagram post (archived here) published by Shaun King on April 12, 2021. The post, which included a photo of Wright and his son at what looked to be a birthday celebration for the boy, opened:

Yesterday, police in Minnesota pulled over this young brother, Daunte Wright, because he had AIR FRESHENER HANGING FROM HIS MIRROR. ⁣ 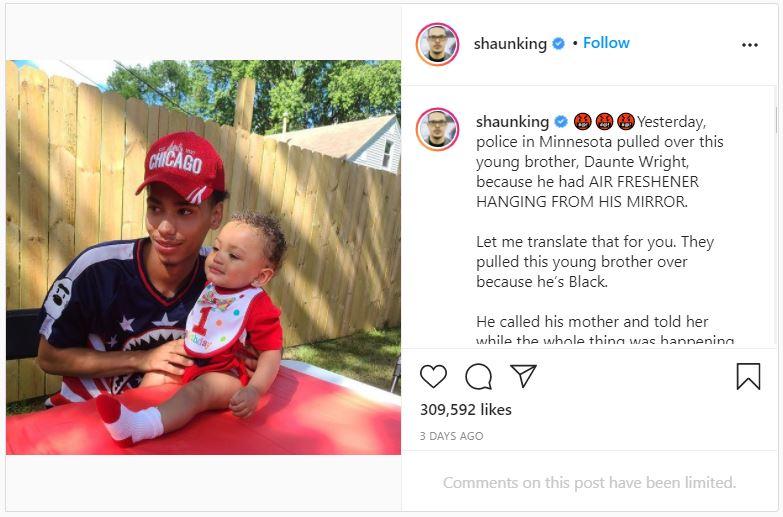 The following embed was functional at the time of writing:

From what I've understood from the public safety briefing, there was an expired registration on the vehicle. That means the tags were expired. Upon arrival, when the officer made contact, I think at that time when he walked up to the car, he discovered that there was a hanging item from the rear view mirror. So there was a contact that the officer went up there initially for attained his ID or his drivers name. And he walked back to his car and at that time he ran his name and he found out that he had a warrant. That's why they removed him from the car and they were making a custodial arrest.

Supporters of the law believe it's necessary to help drivers maintain a clear line of sight, but critics contend it can be used as an excuse to make pretextual stops that target Black people.

In a statement released the same day as Wright's death, the ACLU of Minnesota (ACLU-MN) cited Wright's mother on the question of the air freshener. The statement read:

Initial details are troubling to the ACLU of Minnesota. Wright's mother told several news outlets that she was on the phone with her son when he was pulled over for having a dangling air freshener on his car rearview mirror.

The ACLU-MN has deep concerns that police here appear to have used dangling air fresheners as an excuse for making a pretextual stop, something police do all too often to target Black people.

But, again, according to the police chief, the stop was not for the air freshener but for expired tags.

Gannon has since stepped down as chief, as has Kimberly Potter, the Brooklyn Center police officer who shot Wright. Officials have said she seemingly mistook her gun for a Taser. She was charged with second-degree manslaughter on April 14, 2021.

Lead Stories has collected its fact checking of the Daunte Wright case here.