Did then-Soviet leader Nikita Khrushchev say in a speech, "Your children's children will live under communism. You Americans are so gullible..." on September 29, 1959? And was this speech on the same day as the day he purportedly banged his shoe in the United Nations General Assembly Hall? No, that's not true: This letter-to-the-editor is a mixed combination of details that are famously repeated but not verified facts. Nikita Khrushchev did visit the United States between September 15-27, 1959. He was not in the United States giving speeches on September 29, 1959, and there is no hard evidence that the shoe-banging incident at the U.N. ever happened.

The general format of this claim appeared originally in a Facebook post by a man called Jack Frost on April 30, 2020. The text of that post with a few small changes, was published in December 2020 by Bill Price as a letter-to-the-editor in a newspaper. A photo of that newspaper was posted back on Facebook and is viral once again. One post (archived here) was published on March 23, 2021, and was captioned in Afrikaans, "Dit klink mos waar?" translated, "Does that sound right?" It opened:

Remember Khrushchev's Prediction? Remember watching him banging his shoe!!! A sobering reminder. It's been almost sixty one years since Russia's Khrushchev delivered this in September 29, 1959.

THIS WAS HIS ENTIRE QUOTE:
"Your children's children will live under communism. You Americans are so gullible. No, you won't accept communism outright; but we will keep feeding you small doses of socialism until you will finally wake up and find you already have Communism. We will not have to fight you; We will so weaken your economy, until you will fall like overripe fruit into our hands."

"The democracy will cease to exist when you take away from those who are willing to work and give to those who would not."'

Lead Stories reached out by email to the associate publisher of the of the Carteret County News-Times newspaper in Morehead City, North Carolina, and confirmed that this letter-to-the-editor appeared in print on the opinion page on December 8, 2020. The text of the letter is copied almost verbatim from a viral and debunked Facebook post from April of that year. Now a photo of the letter in the print edition of the newspaper has resurfaced for another round on Facebook.

The letter-to-the-editor continues on to list eight "levels of control" that purportedly will create a "Socialistic State" that will lead to communism. Some people reading this have been led to believe that these eight points were a part of the purported speech from Khrushchev. Others may think that the eight points are from the author of the letter. In 2017 Lara Trump posted a tweet with these eight points, coincidentally appearing in the same format as this Facebook post -- a photo of a photocopied letter to the editor. That letter to the editor falsely attributes these eight points to Saul Alinsky who wrote the book "Rules for Radicals," but Alinsky did not write these eight points that have been frequently attributed to him. Newsweek published an article, "Lara Trump Spreads Fake News About Clinton and Obama Trying to 'Control the People'." Snopes had already covered the claim about Alinsky in 2014 and concluded that these points were derived from the unattributed Communist Rules for Revolution.

America: Keep your eyes open 👀 there are people in the USA trying to make this a reality👇🏽Never stop fighting to save our country 🇺🇸 #MAGA pic.twitter.com/vsFUw8VYNz

Khrushchev did visit the United States between September 15-27, 1959, and he was back in Moscow by September 28, 1959. This viral text claims Khrushchev made this speech stating, "Your children's children will live under communism. You Americans are so gullible..." on September 29, 1959. There is no record of Kruschev ever saying this in a public speech. A translated copy of the book, "Khrushchev in America," which chronicles his 1959 trip to the USA and all of the speeches, is archived here. 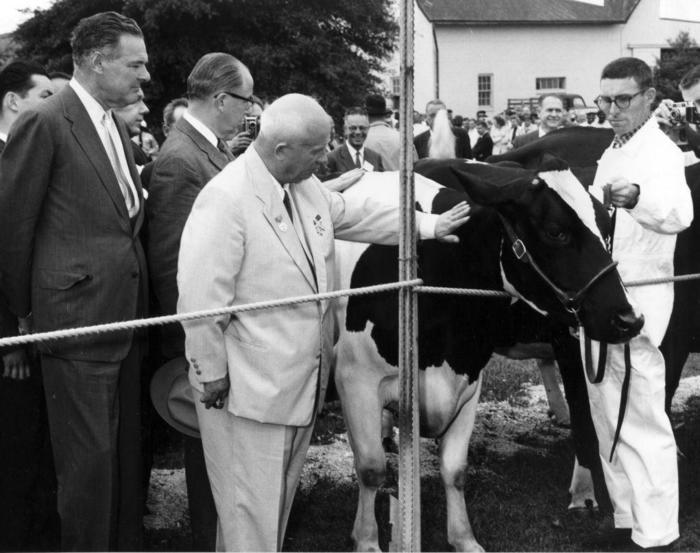 It seems that the only source for the quote purportedly said by Khrushchev is from the first-hand recollection of Ezra Taft Benson, which he repeated in a speech in 1966. As the secretary of agriculture from 1953 until 1961, he spent some time with Khrushchev on September 16, 1959, because agriculture was a primary focus of the September visit. It seems unlikely that Khrushchev had an opportunity to say something so momentous to Benson that no one overheard, and that Benson didn't repeat for another seven years. Below is audio of Benson's 1966 speech. The "small doses" part, where he tells what Khrushchev purportedly said to him is after the 41-minute mark:

...as we talked face-to-face he indicated that my grandchildren would live under communism. After assuring him that I expected to do all in my power to assure that his and all other grandchildren will live under freedom, he arrogantly declared in substance, 'You Americans are so gullible -- no you won't accept communism outright, but we'll keep feeding you small doses of socialism until you will finally wake up and find you already have communism. We won't have to fight you; we'll so weaken your economy until you fall like overripe fruit into our hands.'

Several years earlier, in 1962, The New Republic published an article by Morris K. Udall, then a congressman from Arizona. In 1962 The "small doses" quote repeated by Benson in 1966 had already been circulating for some time without any definitive proof that Khrushchev even said it. Udall did some fact-checking of his own to try to discover evidence of the quote or information about the circumstances. He reached out to the Library of Congress for assistance, and this was the reply:

We have searched the Legislative Reference Service files, checked all the standard reference works on quotations by Khrushchev, and consulted with the Slavic division of the Library of Congress, the Department of State, and the US Information Agency, in an attempt to determine the authenticity of this quotation. From none of these sources were we able to produce evidence that Khrushchev actually made such a statement.

As for the shoe-banging, this appears to be a strange instance of the "Mandela Effect" -- a recently named phenomenon where large numbers of people incorrectly remember similar details of a well-known event.

The original author of the text of this post wrote, "Remember watching him banging his shoe!!!" How he could have watched this shoe-banging incident is a bit of a mystery. Many people seem to remember watching it over 60 years ago, and yet there is no concrete record it happened. There is no known film footage or press photograph, although several fake photoshopped pictures do exist. If the shoe was banged, the common story of what happened was associated with events on a 1960 trip and not the trip in 1959. Amherst College Professor William Taubman, who published a book about Khrushchev, investigated the question of the shoe-banging incident. He contacted several people who were there at the time who said it didn't happen and he was not able to find any proof that it did happen. His findings were published in a July 26, 2003 opinion column in The International Herald Tribune.