Does this photo show someone's great-grandma who was a pioneering flight attendant in 1914? No, that's not true: It's actually a picture of the pop star Britney Spears on set for her music video, "Toxic."

An example of the claim appeared in a tweet (archived here) from April 4, 2021 on Twitter. The picture included a caption that read:

My great-grandma in 1914 She was the first female flight attendant for the United States' first scheduled commercial airline flight on 1 January 1914.

My great-grandma in 1914 ♥ She was the first female flight attendant for the United States' first scheduled commercial airline flight on 1 January 1914 😍 pic.twitter.com/lycJPdjxEm

Lead Stories uploaded the image to Yandex.com, a search engine that uses facial recognition technology for image searches. The results showed the same picture of Britney Spears in color. There is another tweet with the image in color with the caption, "no more toxic friendships no more toxic relationships only toxic by britney spears." The photo from the claim has been edited by adding a sepia filter and fake rips and tears to make it look older.

When searching "Toxic Britney Spears" on YouTube, the first result was "Britney Spears - Toxic (Official Video)" with Spears in the same blue flight attendant outfit from the claim.

The claim was correct that the first scheduled flight with passengers happened January 1, 1914. According to the Smithsonian National Air and Space Museum, the world's first scheduled airline sent a one-passenger plane from St. Petersburg, Florida to Tampa, Florida in 23 minutes.

As passenger planes got bigger, there was room for flight attendants. The first female flight attendant's name was Ellen Church, shown at left in the photo following this description. A registered nurse and trained pilot, she served aboard Boeing Air Transport, whose first flight took off on May 15, 1930. 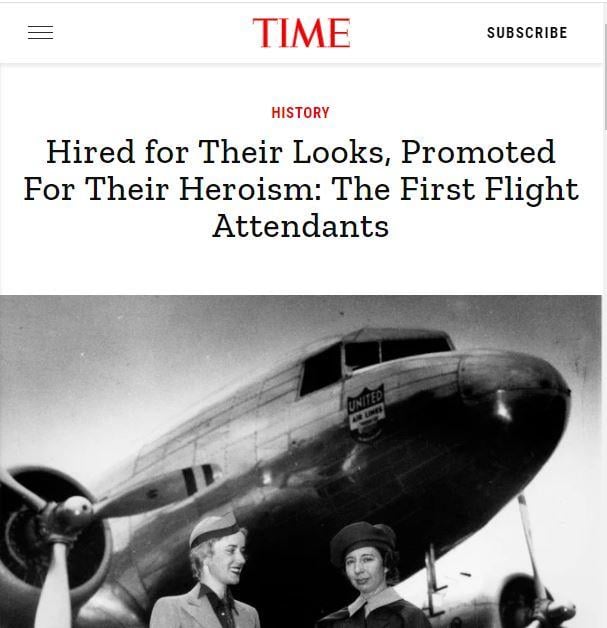