Was the phrase "How To Hit A Woman So No One Knows" Googled 163 million times during 2020 as reported in an article in The Journal of General Psychology and subsequent articles about those findings? No, that's not true: The author of the article discovered that she had used a faulty method to conduct this research. She made a public statement about this on Twitter and said, "The method I utilised in this paper, and therefore my results are inaccurate."

The original article published in The Journal of General Psychology on January 22, 2021 was picked up by other publications in late April 2021. Screenshots and memes were developed from this flawed reporting and began to circulate on social media. One example is this post (archived here) published on Instagram by "hoenest" on May 3, 2021. This is a screenshot of the headline that appeared in Blavity.com with the additional caption, "This article had my jaw on the floor.":

In contrast, the phrase "He will kill me," was typed into Google 107 million times. 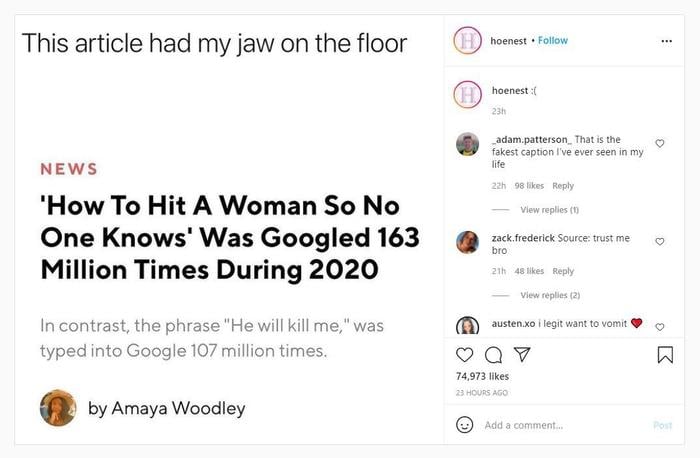 The Blavity.com headline pictured in this Instagram screenshot has been changed. The April 27, 2021 article by Amaya Woodley is now titled, "Domestic Violence Cases On The Rise In COVID-19 Pandemic." A correction has been added at the end of the article. It reads:

Correction: An earlier version of this article included the results of a study in The Journal of General Psychology about the number of times men searched information on how to assault women. After this information was published, the researcher behind the study wrote on Twitter that she found flaws in her methodology and that her findings were ultimately untrue.

An opinion column titled, "Men are becoming more violent against women around the world. Google shows how." was published by MSNBC.com on April 26, 2021. A correction was added the following day:

CORRECTION (April 27, 2021, 4:30 p.m. ET): A previous version of this article included the results of a study in The Journal of General Psychology about the number of times men sought information on how to assault women. After the MSNBC article was published, the researcher who conducted the study said she had discovered flaws in her own methodology, and the results of the study have been removed from the article.

The article titled, "COVID-19, suicide, and femicide: Rapid Research using Google search phrases" was published in The Journal of General Psychology on January 22, 2021. The author, Katerina Shandish, wrote about her error in a thread on twitter. In summary she stated:

For researchers seeking to use my method...don't. It is flawed. To the Journal of General Psychology that saw merit in my work, I am grateful, but let's take a closer look please.

An article came out yesterday that has generated a lot of scrutiny about the web research paper I wrote last November looking for online indicators of psychological stress related to unemployment, suicide and indicative and intentional male violence.

The number of results a web search will yield varies depending on several factors. There is a tool called "Google Trends" which is designed to chart the relative popularity of certain search terms over time, as well as across the globe. The result of a Google Trends search reflects the number of searches conducted with the Google search engine but does not count the number of websites containing specific words or phrases the way the Google search engine does. On May 4, 2021, the day of this writing, Google Trends shows a sudden small spike of interest at the end of April which aligns with the timing of the articles and analysis which were discussing and countering the flawed methodology. The same trend search looking back over the past 12 months, does not show any increased interest in this specific phrase. 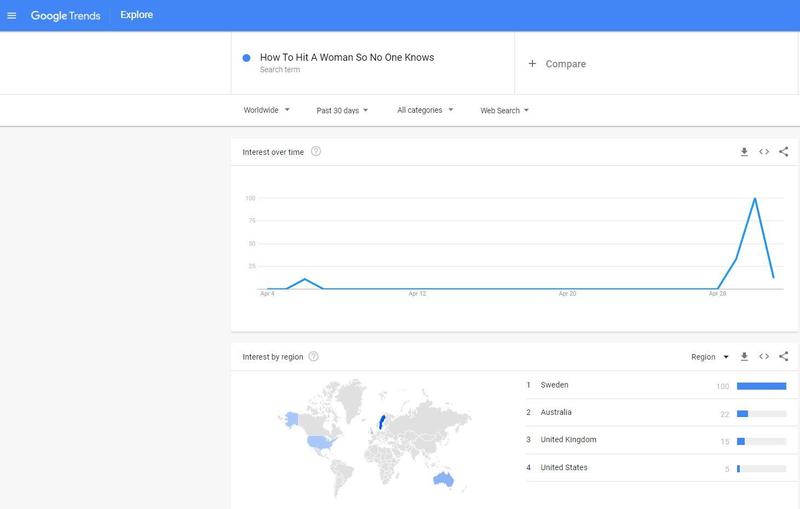