Did a child in Gaza capture a video of members of Hamas, a Palestinian political and militant group, driving a truck loaded with rocket launchers through a residential street in Gaza? No, that's not true: The video, which first appeared in 2018, shows the town of Abu Snan in the northern region of Israel, and the truck contains large missiles, not rocket launchers.

A kid in Gaza took this video. Hamas terrorists park their rockets and launchers in his residential street, using Gaza residents as their human shields. Any comments on this barbarians' behavior?

Posted during the May, 2021 conflict between Hamas and Israel over disputed holy sites in Jerusalem, the implication is it documents events in that contact.

Twitter users started looking into the video on May 12, 2021, when it appeared in a since-deleted tweet (archived here) by Twitter page @StopAntisemites. The same video was identified by Twitter user @TaylorPBrooks, who identifies himself as a cyber threats expert at global consulting firm Booz Allen Hamilton, on May 12, 2021, as a video posted to Facebook on November 25, 2018. Brooks' tweet (archived here) is embedded below:

The original video was posted by the Facebook page of MivzakLive, described as a media and news company. The English translation of the video's caption (originally in Hebrew) stated:

Trucks with ′′ missiles ′′ were wrong on their way and entered the village of Abu Sanan in the north.
Photography: amar 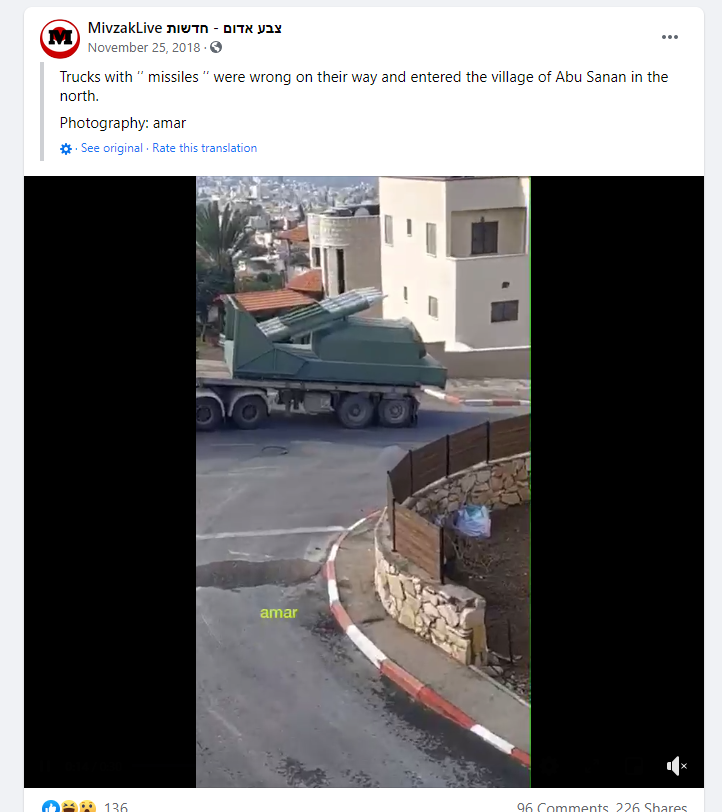 The exact location of the video was identified by Twitter user @AKMcKeever. The tweet (archived here) is included below:

The May 2021 conflict between the Israeli government and Palestinians has spawned plenty of misinformation. Lead Stories has debunked other videos (here and here) misattributed to the conflict.