Does a person's birth certificate, with their name spelled out in capital letters, create a second entity, a "straw man," that is owned by the state and is separate from the flesh and blood person given that name at birth? No, that's not true: This is an illegitimate theory promoted by several different conspiracist groups such as Sovereign Citizens, Freemen of the Land and others.

Adherents try to create legal-sounding justifications for beliefs and behaviors that declare they are exempt from legal jurisdiction. The dual identity Straw Man theory, where only the paper identity is bound by law, is the flawed foundation that many of the other pseudo-legal arguments are built on.

These movements exist mostly in English-speaking countries. Although the specific laws they reject may vary country to country, adherents frequently refuse to pay taxes, to register and insure their car, to carry a driver's license or to honor debts. When tested, these belief systems and their rehearsed pseudo-legal "get out of jail free" catchphrases do not provide adherents the exemption from consequence they were conned into believing.

The video making this claim is a short clip from a full-length 2015 documentary titled, "Strawman - The Nature Of The Cage." This recruitment clip appears in a Instagram post published by the_conscious_awakening on June 28, 2021, under the title "Birth Certificate Deception (Exposed)." The video has a bold heading "BIRTH CERTIFICATE IS NOT WHAT YOU THINK IT IS.." The post has a lengthy caption:

So, in layman's terms, the straw man is an artificial person. This was created by government shortly after you were born via the registration of the application for your birth certificate. The name for the straw man is your name in ALL CAPITAL LETTERS. 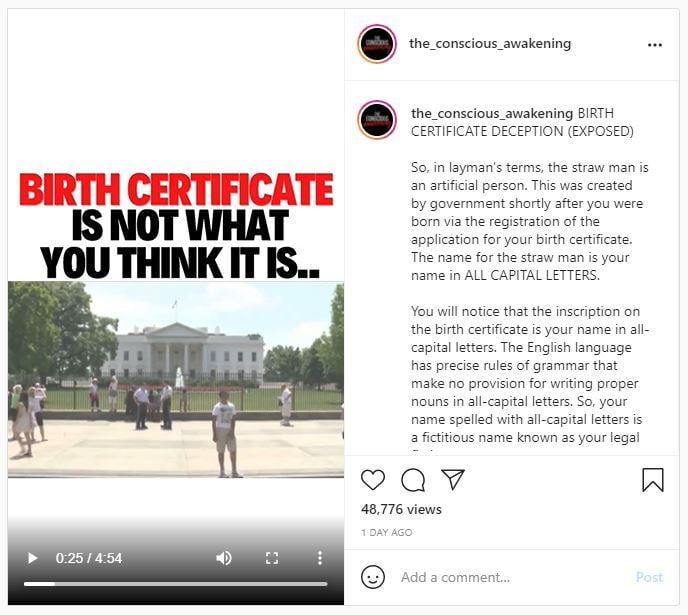 The caption directs the audience to another platform:

Statutes and Acts of Parliament and most importantly the one they are using for the engineered health crisis right now are only applicable to the legal fiction strawman entity that is on the birth certificate, the corporation they enslaved you under from birth.

Your legal fiction has a same-sounding name as your name, but is an artificial entity which exists only "by force of or in contemplation of law." The all-caps name is not your 'true name' which consists of the given (Christian) name plus the surname (family name), and appears with only initial letters capitalized. The all-caps version of your name is a TRADE NAME, the name under which you 'do business.'

The Full Documentary is titled 'Straw Man Nature of the Cage and it's up on YouTube, highly recommend everyone watches this.

If your not in my Telegram channel please head over to the join link in my bio and join, because the censorship is only going to increase and I may get removed from here at some point. ☝️

The rules of grammar, punctuation, capitalization and even ink color do not carry secret embedded meanings. This concept of a straw man entity known as a "legal fiction" is a misuse of a real legal concept known as legal fiction. Courts do not recognise this dual identity theory: If a person breaks the law, it is not their birth certificate that will be charged with the crime or incarcerated regardless of whether the name on the birth certificate is written with all capital letters.

The Internal Revenue Service has already heard this straw man argument and termed it frivolous in a 2005 update to the IRS code Rev. Rul. 2005-21:

Frivolous tax returns; use of 'straw man' to avoid tax. This ruling emphasizes to taxpayers and to promoters and return preparers that a taxpayer cannot avoid income tax on the erroneous theory that the government has created a separate and distinct entity or 'straw man,' in place of the taxpayer and that the taxpayer is not responsible for the tax obligations of the 'straw man'. This argument has no merit and is frivolous.

The FBI has its own alert regarding straw man fraud:

Proponents of this scheme claim that the U.S. government or the Treasury Department control bank accounts--often referred to as 'U.S. Treasury Direct Accounts'--for all U.S. citizens that can be accessed by submitting paperwork with state and federal authorities. Individuals promoting this scam frequently cite various discredited legal theories and may refer to the scheme as 'Redemption,' 'Strawman' or 'Acceptance for Value.' Trainers and websites will often charge large fees for 'kits' that teach individuals how to perpetrate this scheme. They will often imply that others have had great success in discharging debt and purchasing merchandise such as cars and homes. Failures to implement the scheme successfully are attributed to individuals not following instructions in a specific order or not filing paperwork at correct times.

In a September 1, 2011, article titled, "Sovereign Citizens A Growing Domestic Threat to Law Enforcement" in the FBI's Counterterrorism Analysis Section, it is explained:

The FBI considers sovereign-citizen extremists as comprising a domestic terrorist movement, which, scattered across the United States, has existed for decades, with well-known members, such as Terry Nichols, who helped plan the Oklahoma City, Oklahoma, bombing. Sovereign citizens do not represent an anarchist group, nor are they a militia, although they sometimes use or buy illegal weapons. Rather, they operate as individuals without established leadership and only come together in loosely affiliated groups to train, help each other with paperwork, or socialize and talk about their ideology. They may refer to themselves as 'constitutionalists' or 'freemen,' which is not necessarily a connection to a specific group, but, rather, an indication that they are free from government control. They follow their own set of laws. While the philosophies and conspiracy theories can vary from person to person, their core beliefs are the same: The government operates outside of its jurisdiction. Because of this belief, they do not recognize federal, state, or local laws, policies, or regulations.

In July 2014, a report from the National Consortium for the Study of Terrorism and Responses to Terrorism surveyed 364 officers from many different law enforcement agencies. There was a shift in which groups officers ranked as the most serious terrorist threat. A survey by the Department of Homeland Security in 2006-7 had Islamic extremists/jihadists in the number one position, but in the 2013-14 survey, Sovereign Citizens had moved from seventh position to the first.

Lead Stories has covered other pseudo-legal beliefs that surfaced from conspiracy channels. These ideas spring from the same "common law court" movement. One common conspiracy belief is that the United States is not a country but a corporation -- this was behind the belief that Donald Trump would be sworn in as the 19th president on March 4, 2021. Another example is that the gold fringe on a flag represents maritime or martial law.