Did an Afghan man clamber onto a departing jet and ride atop its engine to escape the Taliban? No, that's not true: A Vietnamese man who produces trick photos did the video as a prank. Also, a spokesperson for an airplane manufacturing company told Lead Stories this was "totally impossible." 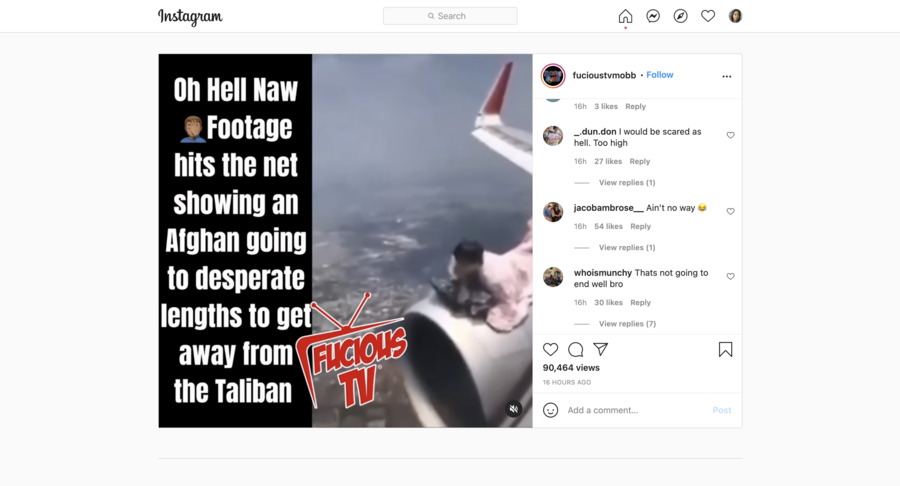 On the Pinterest screenshot was a watermark that read "Cre: Huy quân hoa." A Google search of this name led us to a Vietnamese graphic designer who goes by Huy Quân Hoa/Huy Xuân Mai. Using those names, we found his Facebook pages, one for each name. Mai uses the word photoshop in his Facebook bio, which is mostly in Vietnamese. Hoa's Facebook bio does not mention photoshop. We translated the bio on the Mai account with Google Translate. It's roughly translated to "Collage, teach photoshop, work contact Zalo." Zalo is a messaging app, according to the Google Play store.

Lead Stories emailed Airbus, an airplane manufacturing company, on August 20, 2021, for further explanation as to why a person couldn't ride on the outside of a jet. A spokesperson responded the same day:

Totally impossible. To answer your specific questions, the temperature on the outside of a jet engine in that location would not be particularly hot. In fact, the air temperature would be cold, especially at eventual cruise altitude. In any event, no ... a person could not hold onto an engine cowling in flight.

Lead Stories reached out to Mai about the video and will update if he responds.