Did Germany halt all COVID-19 vaccines because they are unsafe and no longer recommended? No, that's not true: Clickbait headlines, capitalizing on the language barrier, are representing as factual a multiday broadcast event that made clear that its "global pandemic exit exercise" was a type of political theater. The video shows a "planspiel," a scenario-based simulation presenting what the new interim government would do if trial lawyer Reiner Fuellmich were chancellor of Germany, which he is not and has little chance of becoming.

The basiscamp.live event was broadcast daily between August 20 and 24, 2021. Copies of excerpts of the livestream and screenshots have been rehosted on other video-sharing platforms and blogs and then shared back onto Facebook. One example of misleading captioning appears in this post published in the Facebook group "Canada wants Pierre Poilievre" on August 27, 2021, under the title "GERMANY HALTS ALL C19 VACCINES, SAYS THEY ARE UNSAFE AND NO LONGER RECOMMENDED!!". The full caption on the video hosted on Brand New Tube reads:

⁣BREAKING
GERMANY HALTS ALL C19 VACCINES, SAYS THEY ARE UNSAFE AND NO LONGER RECOMMENDED!!
There has been a 2 week pause so they can reflect on the damages being caused to their people, NO ONE CAN GET IT and the vaxxine license has been put on pause!!
GO GERMANY!! 🇩🇪 - But the chessboards still at play... Germany has been rioting ALLOT PAST FEW MONTHS THIS WILL TAKE THE PRESSURE OFF UNTIL MORE ENFORCEMENTS COME.. To then put mandatory vaccines in place - WAKE UP
DENMARK ALSO LOOKS TO ABOLISH COVID MEASURES OCTOBER 2021 ⁣https://brandnewtube.com/v/iyxGIn 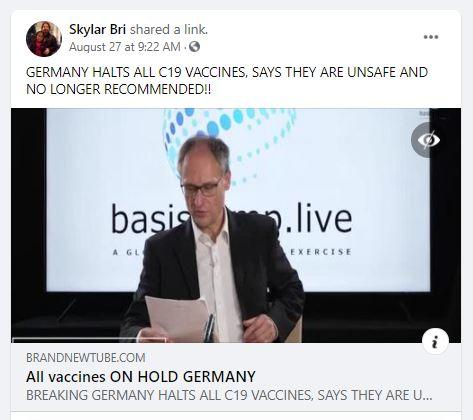 The basic claim of this post, that Germany has halted all vaccines, is fictional, as is the broadcast simulation. The daily number of people receiving vaccines in Germany has been declining since June, but the vaccine dashboard from the German Federal Ministry of Health and the Robert Koch Institute shows there has not been any interruption in COVID-19 vaccination in Germany. 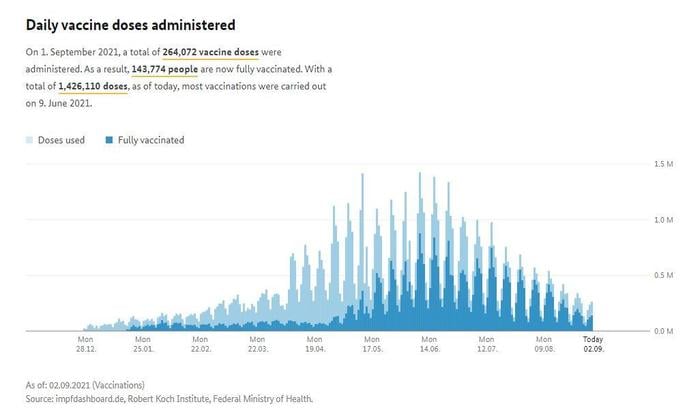 The logo for Basiscamp.live has the subheading "A GLOBAL PANDEMIC EXIT EXERCISE," explaining that the video shows a simulation of a change-of-government scenario and is not real. The person playing the role of chancellor of this hypothetical interim government of Germany is Reiner Fuellmich.

Fuellmich, a trial lawyer and anti vaccine activist, is a member of the Basic Democratic Party of Germany called dieBasis, which was founded in July 2020. On April 24, 2021, Fuellmich, Wolfgang Wodarg and Stephan Kohn were announced as dieBasis candidates for the German federal parliament or Bundestag. This election, with over 6,000 candidates, takes place September 26, 2021. All three candidates are known for their criticism of the measures enacted to combat the coronavirus pandemic. Their party is one of 50 minor parties and not expected to gain seats in the German parliament.

On the base camp YouTube channel, the set-up for the BasisCamp.live event is described this way:

The Business-game Event BasisCamp is organized by members of the Corona Investigation Committee and numerous previous guests. The scenario: The federal government has resigned and a transitional government has been formed. Under the direction of the new Federal Chancellor Dr. Reiner Fuellmich and other members of the interim government will analyze the current situation with the help of current experts from various areas and assess the measures.

In the videotaped fictional scenario, Kohn reads from a script as if this is a news announcement. An English translation has been dubbed over his voice. His announcement says in part at 1:15:

Dear citizens, please stay confident you can rely on the federal government to do everything possible to come to decisions with all due diligence to handle possible risks we may be facing and develop the respective solutions. Federal Chancellor Dr. Fuellmich has set up a government team of excellent experts especially in the area of health so I will keep you informed about the developments.

Lead Stories addressed false claims made by Fuellmich in the past, that the COVID-19 PCR tests create false positive results and the data on excess deaths are incorrect, and also addressed his claims that the pandemic was planned by global elites (here and here).