Did Colin Powell, the first Black secretary of state and chairman of the Joint Chiefs of Staff, commit suicide? No, that's not true: That claim is not supported by any news coverage of his death, by any statements from his family or officials or by any medical evidence. The Associated Press and other news organization stated that Powell died from complications of Parkinson's disease, multiple myeloma, and COVID-19. The source of the baseless suicide claim -- Real Raw News -- is known for creating false stories about public figures.

The disreputable, faux Biden administration and its media cohorts have perpetrated yet another fallacy on the American public by claiming that Colin Powell died of "Covid-19 complications" despite being fully vaccinated. 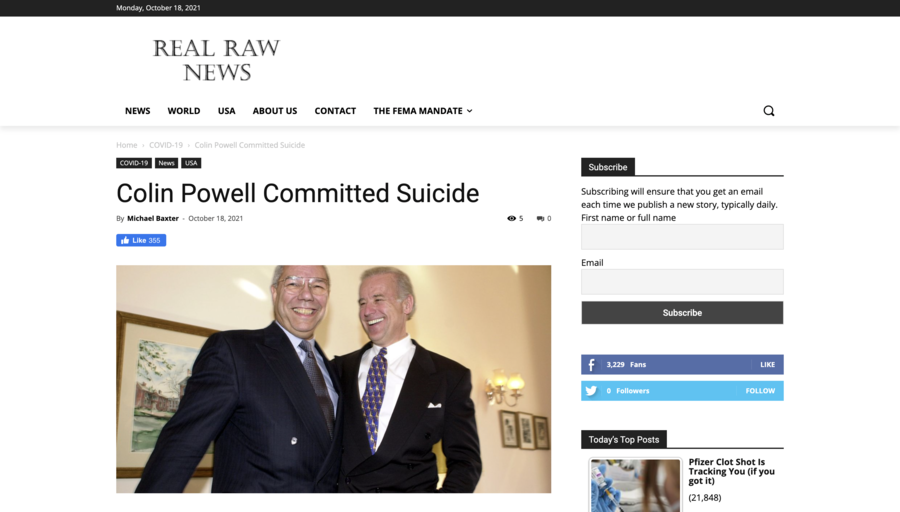 The Real Raw News article continued: "Powell, who had suffered from multiple myeloma, a blood cancer, committed suicide early Monday morning, our source said. 'Powell died at home after consuming a bottle of prescription sleeping pills,' he said... After a thorough examination of the bedroom, one agent found what appeared to be a suicide note on the floor beside the Powell's bed."

The Real Raw News article gave no support other than an anonymous source to substantiate its claim. There has been no confirmation of any such suicide note written by Powell or evidence of sleeping pills. A Google search of "Colin Powell suicide" shows no evidence indicating that or even alluding to suicide was the cause of Powell's death on October 18, 2021.

Multiple reputable news sources state that Powell died from a combination of illness, amongst them was COVID-19, despite being fully vaccinated. The AP wrote, "Powell was fully vaccinated against the coronavirus, his family said. But he faced several ailments, telling Washington Post journalist Bob Woodward over the summer that he had Parkinson's disease. Powell's longtime aide, Peggy Cifrino, said Monday that he was also treated over the past few years for multiple myeloma, a blood cancer that impairs the body's ability to fight infection."

The Biden administration did not comment on Powell's cause of death in its October 18, 2021 statement. The statement the White House put out called Powell a "dear friend and patriot of unmatched honor and dignity," to the Bidens. The Real Raw News claim that the "faux Biden administration...have perpetrated yet another fallacy on the American people by claiming that Colin Powell died of 'Covid-19 complications'" is false, as there was no mention of cause of death in the Biden statement.