Did Bergen County, New Jersey, report that 100% of its votes were counted in the state's 2021 general election, yet add unexplained votes afterward? No, that's not true: although news websites such as The New York Times reported that 100% of results were in, that figure did not take into account every vote cast, such as mail-in and provisional votes, which are not tallied by precinct and are counted after precinct results.

The claim appeared in an Instagram post (archived here) published on November 3, 2021. It featured screenshots from The New York Times of election results from the New Jersey 2021 general election with a caption that read:

As expected the STEAL IS ON! "Bergen County, NJ reported 219,894 votes last night at midnight - 100% reporting, with 52% for @jack4nj . This morning Bergen county has 261,528 votes (40k more votes) and shows @govmurphy as the declared winner of that county. Make them report it. FULL AUDIT" - per @iansmithfitness ... Great fight from Jack & Diane... let's finish Phil, legally! #impeachphilmurphy

Although The New York Times showed "100%" in the "Rpt." or "reported" column, that percentage referred to 100% of voting precincts reporting results. Election results from The Associated Press were used as the source of the New Jersey election results reported by the New York Times. In an email to Lead Stories on November 8, 2021, Lauren Easton, global director of media relations and corporate communications for The Associated Press, referred us to the outlet's own fact check of the claim and added:

100 percent of precincts reporting does not mean 100 percent of the vote has been counted. For example, in New Jersey, mail ballots are not typically included with the results from individual precincts, but are instead tabulated by the county and added to the results separately.

Bergen County had advised before Election Day that it had received more than 42,000 mail ballots. When the county reported most of those votes early Wednesday morning, AP added them to its tally.

Jamie Sheehan-Willis, deputy superintendent of elections for Bergen County, said in an email to Lead Stories on November 8, 2021:

The 100% Precinct reporting referred to the voting machines in the 561 election districts in Bergen County on election day. What it didn't include was the Mail In and Provisional Ballots. The Board of Elections was counting Mail In Ballots until about 10PM on 11/2. Sometime around then, the Board of Elections had numbers available. Sometime after that, the media realized they hadn't included those numbers in their totals.

Mail In ballots continue to arrive until today, 11/8. Only after all mail in ballots are counted can the provisional ballots be counted. So the numbers will change again in all 21 counties as ALL countable Mail Ins and Provisionals are processed and added to the count.

Sheehan-Willis also shared a screenshot of the Bergen County Clerk's Office website taken on November 3, 2021, the day after the state's 2021 general election She said:

As you can see, it showed zeros in the Mail Ins and provisional columns. Apparently, no one looked at that before posting numbers without a disclaimer.

The screenshot is included below: 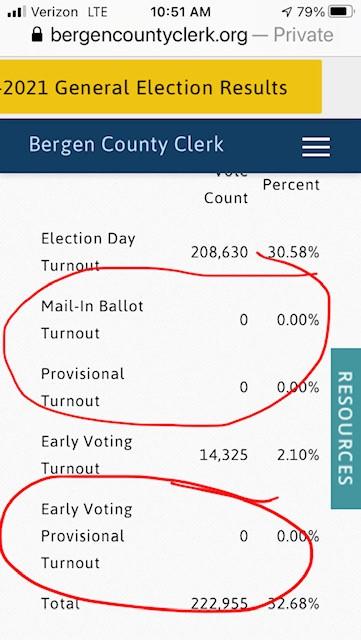