Were first-grade students attending Nellie Stokes Elementary in the Caesar Rodney School District in Delaware sent home with a "List of Privileges"? No, that's not true: The handout in a photo was not given to all the students, and it is still unclear how one student came to have the list. The person who created the original post about the list took it down and posted a retraction after speaking with the school district superintendent and president of the board of education, according to Mike Marasco, the board president. The school district posted a notice to their website saying that the allegation was unfounded.

The original Facebook timeline post made by a relative of a student claimed that Caesar Rodney school district sent this list home with a first grader. That relative posted a retraction notice on November 17, 2021. Screenshots of the original post, the photo of the document and several different captions were already circulating on Facebook. One example of this is a post published on November 17, 2021, with the caption:

This screenshot version contains the caption:

The text of the handout shows 23 points. It opened:

1. You are white.
2. You speak English fluently.
3. You are male assigned at birth.
4. You are heterosexual.
5. Your parents went to college.
6. You are able bodied. 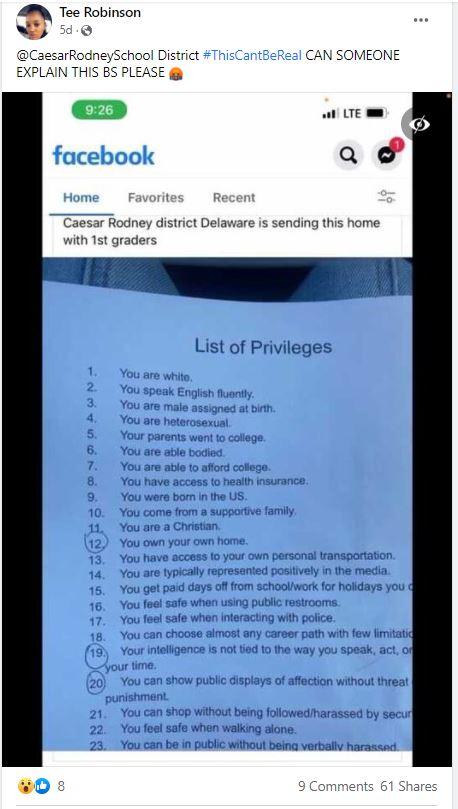 The post by a student's relative, which is no longer publicly visible but is recorded in screenshots, was originally captioned to say:

Caesar rodney school district delaware has sent this home with my 1st grader niece! Are you serious right now????? She attends Nellie Stokes ELEMENTARY!!! Thank goodness this isn't my child. She doesn't even understand half of what's on here!!!!

The originator of the post took it down and posted a retraction after she reached out to me and the superintendent to discuss the matter. The district is not hiding anything of the likes and neither are the little girls parents or her aunt. I can assure you it was definitely not a part of any assignment to any student in any grade. Please feel free to call me to discuss.
Thank you.

That relative's retraction statement was further edited at 12:03 and then 1:48 PM to say:

After further investigation regarding the CR district & CRT its been found to be inaccurate with reg. To how the paper went home

On the website of the Caesar Rodney School District a pop-up message was posted that must be acknowledged before proceeding. It reads:

The Caesar Rodney School District was made aware of a social media post that had gone viral regarding a document alleged to have been given to a first-grade student. The incident in question was investigated, the student's parent was contacted, and the allegation has been determined to be unfounded.

On November 18, 2021, the independent local Delaware news outlet First State Update posted an update to an earlier post on their Facebook page. It reads:

Update: We recently asked parents at a Caesar Rodney elementary school to contact us regarding a document that was reportedly sent home with children - When we didn't receive a response from parents and the original poster took their post down we made a call not to post the document. During our investigation we were able to confirm that the document was not sent to children, however, it was distributed to teachers at Nellie Stokes Elementary as part of a training course. There are a lot of moving parts with this story. We have emails into the CRSD leadership. Expect more in the coming days.

Shelley Meadowcroft, the director of public relations and communications for the Delaware State Education Association, told Lead Stories via an email on November 23, 2021, that the organization "did not have anything to do with the list of privileges paper that is going around. It did not come from one of our trainings. We spoke to the CR superintendent Kevin Fitzgerald and he said that it didnt come from a CR teacher and the one named in the post from First State Update wasn't even a teacher at CRSD."

Lead Stories reached out by email to the school district on November 22, 2021, but had not received a response at the time of publishing.