Is bathing in a mixture of borax, baking soda, "Indian healing clay" and Epsom salt a good way to "detox" the COVID-19 vaccine from your body? No, that's not true: There is no scientific evidence that bathing in a borax mixture will remove the vaccine from your body. Dr. William Schaffner, a professor of preventive medicine, told Lead Stories that once a person has been inoculated with the vaccine, it disintegrates from your body and there's no other way to get it out. And a company that makes a popular borax laundry product advises that its product is "not intended for use as a personal care product."

This bath detox was shared by Dr Carrie Madej. I researched some of the benefits and these products get rid of bacteria, viruses, fungus, parasites, X-ray radiation, heavy metals and food toxins and more. Recommended for anyone who got Vax'd under pressure and wished they didn't. It's just also a great healthy bath detox with healing properties towards cancer. 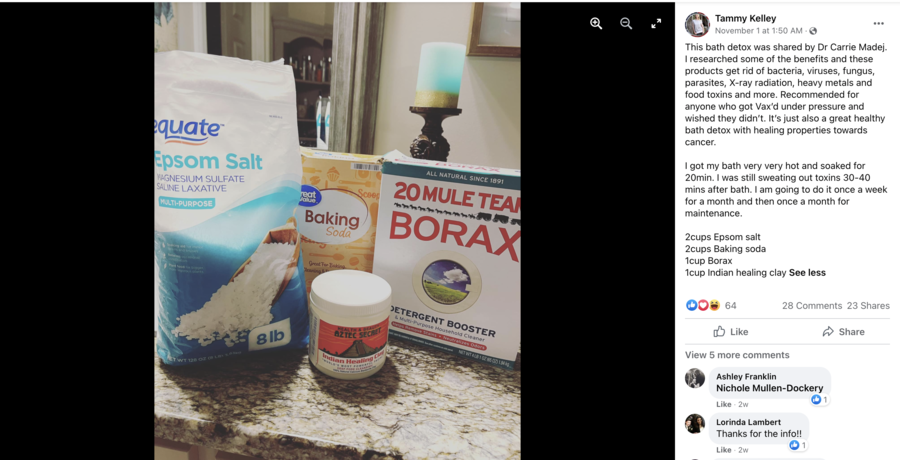 The post continues with a recipe for a bath, with "1 cup Borax" combined with Epsom salt, baking soda and "Indian healing clay." Although the post does not directly refer to COVID vaccines, it mentions "anyone who got Vax'd under pressure and wished they didn't," and it cites Dr. Carrie Madej as having shared the "bath detox."

Madej is an anti-vaccine influencer on Instagram and Facebook with a history of spreading misinformation to her followers. For example, Madej -- a Georgia-licensed doctor of osteopathy -- claimed that the COVID vaccine has transhumanism technology (archived here). Lead Stories debunked the claim that the COVID vaccine has DNA-altering properties and various other claims by or involving Madej. You can see those here.

Many media outlets have attributed this detox claim to Madej (NBC, Forbes) as does the Facebook post, but she has since tried to distance herself from it. She wrote on her Instagram account on November 14, 2021, that she has "never told anyone that we have a detox for the current jabs." 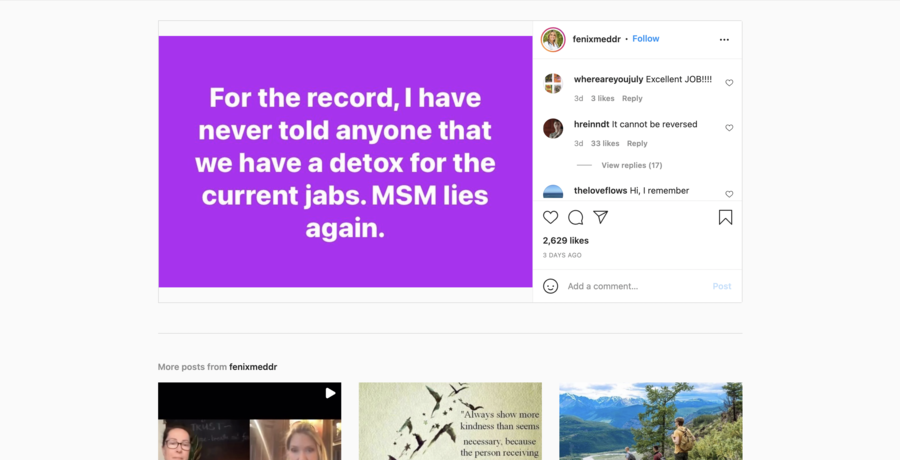 The acronym MSM is an apparent reference to "mainstream media."

Dr. William Schaffner, a professor of preventive medicine at Vanderbilt University Medical Center, told Lead Stories that taking a bath in borax to remove the vaccine had no basis in fact:

... it's totally bogus ... silly, beyond absurd, no scientific basis. Why would you want to remove the vaccine? First of all, this vaccine, when it's inoculated, remember it's called messenger RNA, mRNA, it transmits its molecular message and then the vaccine that you have inoculated disintegrates. It does that within 24 to 48 hours, and you excrete the disintegrated product of the vaccine from your body, so you do that naturally already.

We asked Schaffner if there were any benefits of taking a borax bath in general. He stated:

Actually, I think the risk is probably very, very low if there's any risk. From that perspective, it is a useless, but not harmful activity. [The other ingredients in the post's recipe] are common household products and I think, even in combination, are not going to present any sort of safety hazard.

When asked if any of the other claims for taking a borax bath (getting rid of parasites, bacteria, cancer, etc.) were accurate, Schaffner said they were not.

WebMD states that borax can cause "nausea, vomiting, and diarrhea if ingested by itself, and large amounts can lead to shock and kidney failure." It defines borax as:

... a powdery white substance, also known as sodium borate, sodium tetraborate, or disodium tetraborate. It's widely used as a household cleaner and a booster for laundry detergent. It's a combination of boron, sodium, and oxygen.

Lead Stories contacted the manufacturers of products shown in the photo with the post, and will update this story if responses are received.

One response that did come was from Aztec Secret, producer of Indian healing clay, in a November 17, 2021, phone call we were told both "no comment" on these claims and that the company does not "support those rumors at all."

20 Mule Team Borax, a company that sells borax (their product is among those pictured in the post, with "detergent booster" labeling clearly visible on the box), also responded to Lead Stories regarding the claim. In an email on November 18, 2021, the company said:

"20 Mule Team Borax™ has remained a staple of many American homes as a laundry booster and stain fighter. Borax is safe when used as directed. Do not bathe in, apply to skin or ingest it. Borax is not intended for use as a personal care product or dietary supplement. Do not use outside the recommended uses as a laundry booster and mutli-purpose cleaner - Twenty Mule Team Borax (20muleteamlaundry.com)."

Lead Stories also reached out to the Food and Drug Administration (FDA) for a response to this claim. We will update this story if we receive a response from that agency.