Does an animated short film from the 1920s or 1930s foretell a planned introduction of "weaponized influenza" in order to control the world? No, that's not true: This film is a modern creation done in the style of, and in some portions copied directly from, 1930s-era Fleischer Studios animated films. This cartoon was introduced online as early as May 2021 and there is no established history of the film's existence before then.

The hoax video was posted to bitchute.com by trackthevac on May 31, 2021. The video contains no credits. Many copies of the video have titles that suggest it is a 1930s cartoon. This copy of the video (archived here) suggests it dates to the 1920s. It was posted on YouTube by Fun Creator on July 28, 2021, under the title "How to take over the world cartoon released in 1920." It was captioned:

How to take over the world cartoon released in 1920
Hi there. Some very old film, books, articles, even cartoon show quite precisely everything what's going on now and what will be in future. Coincidence theory again. What is it very well predictions , ability to see future and well done made plane what elite follow. on many things appear more questions than answer. But what we can see, nothing is hidden, no secrets, need just look and read little bit more carefully that it. Well what do you think about? Enjoy the quite shocking cartoon. Thank you for your support!
P.S. Maybe it not real, but what about many other quite interesting publications, speech, films etc?
Other very interesting videos:
https://youtu.be/KER8b8uNs6Y
https://youtu.be/ish9Y_WmqsE
https://youtu.be/Tx5UsrWhmPE
Book: 1984 by George Orwell.
Book: Brave New World by Aldous Huxley etc.

Lead Stories reached out to Fleischer Studios, the pioneering animation studio that created Betty Boop, a style that was unmistakable in the "How to take over the world" cartoon, to ask them about the viral video. We received an email on December 16, 2021, from Jeni Mahoney, the director of digital media:

Yes, it is 100% a fake. In addition to being able to see precisely where the material was pulled from, one can look at the unusual angle of the title cards. It seems as if the angle is intended to add to the feeling that this is an old film, but the actual title cards of the period were not angled, that is a complete contrivance. Also one can see that in an early title card one can see a piece of paper that seems to be pasted onto the card, another piece of sloppiness that never would have appeared in an actual Fleischer film.

Below is a screenshot of the title card mentioned by Mahoney: This shows the sloppy patch under "How To Take Over The World" with the added text, "This is Their Plan." 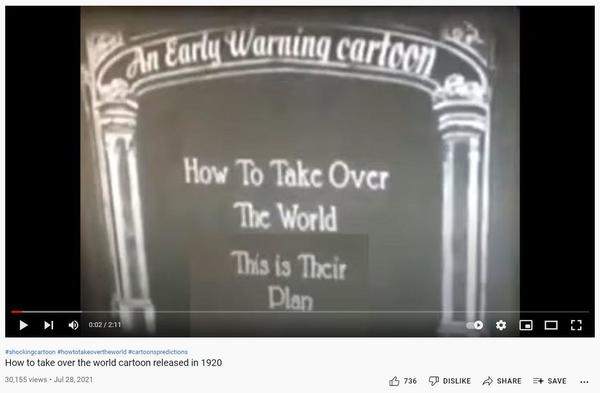 Animation experts have pointed out some technical details visible to the trained eye that betray the use of modern animation technology in the production of the hoax video, notably the scene with the singing radio, which employs a technique called mesh warping. The YouTube channel Ivo Ronzoni posted a video debunk (embedded below) titled, "An Early Warning Cartoon is a FAKE" on July 15, 2021. In this video scenes from the Early Warning cartoon are paired with various clips from 1930s films produced by Fleischer Studios, 1934: "Red Hot Mama," 1936: "When My Ship Comes In" and 1930: "Swing You Sinners." The video debunk shows the elements of the old films that were taken to produce the modern hoax video.

The plotline of the hoax video is spelled out on the cards between the animated scenes. It says:

At the start of the hoax video, 15 seconds in, the phrase "Introduce A Weaponized Influenza" stands out. Merriam-Webster lists the first known use of the term "weaponize" in 1957. Lead Stories conducted a search using Google's Ngram viewer. This tool shows a graph of the usage over time of terms or phrases that have appeared in a corpus of books in Google's digital library. The term weaponized began to really gain ground starting about 1993. Lead Stories was able to locate a 1947 Research Memorandum published by the Rand Corporation that referred to a "Heavy Gondola Car -- Weaponized." This might put the earliest use of the term a decade earlier than Merriam-Webster had, but this is still not as early as the 1930s or 1920s.

For all the technical tells in the production of the animation, or the fine points of language or spelling in the cards, the lack of an archival record of this film from the past is a burden of proof that has not been met by those who assert that it is a vintage animation film. 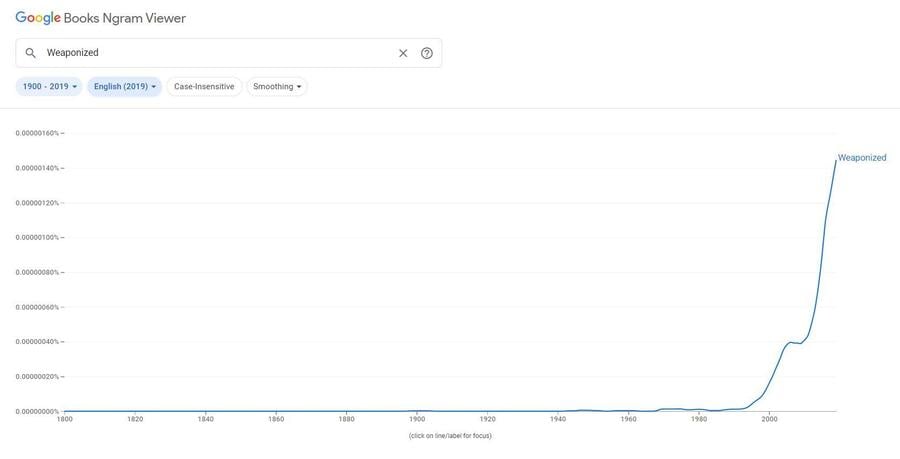