Did the Make-A-Wish Foundation refuse to grant a 4-year-old cancer patient a wish because he is not vaccinated? That's not true: The charity's medical team had ruled out air travel and large group settings for unvaccinated and critically ill children, which is why the charity's staff asked the boy to make a wish other than flying his family to Disney World.

Claims misrepresenting the Make-A-Wish policy regarding wishes that require air travel or large gatherings have circulated since the summer of 2021. An article (archived here) published by toddstarnes.com on January 12, 2022, titled "UPSETTING: 4-Year-Old Cancer Patient Denied Make-A-Wish Over Vax Status" opened:

The Make-A-Wish Foundation refused to grant 4-year-old cancer patient Rocco DiMaggio a wish to go to Disneyworld because he is not vaccinated.

His age group, which includes his younger 2-year-old brother, is not eligible for the jab.

"It was a punch in the gut," Rocco's mom told Newsmax of the Make-A-Wish Foundation's policy that led to canceling the Disneyworld opportunity.

The policy states that all families members for groups with wishes that involve air travel must be vaccinated.

Even if Rocco was old enough, his mom said she is not sure she would give him the vaccine because he's already had COVID twice and is immunocompromised.

However, two organizations, Wigs & Wishes and Millenium Systems International, are teaming up to make Rocco's wish come true later this year -- just in time for his fifth birthday.

The 4-year-old's family went public with their disappointment on December 7, 2021, after they found out that the Disney trip they had been looking forward to was still out of reach.

... Rocco was granted a wish shortly after his diagnosis in May 2020. His wish was to go to "Mickeys House" aka #DisneyWorld. Because he was very sick and not walking we asked for his wish to be put on a medical hold until he got stronger. Recently I received a call and follow up email informing us that Roccos wish could not be granted because he does not have the C19 Shot. When I explained that Rocco is only 4 and not eligible for It, even if I wanted to give It to him, I was asked to have him "reimagine" a wish ... Could we take him to Disney on our own? Of course we can, however the experience will not be the same. 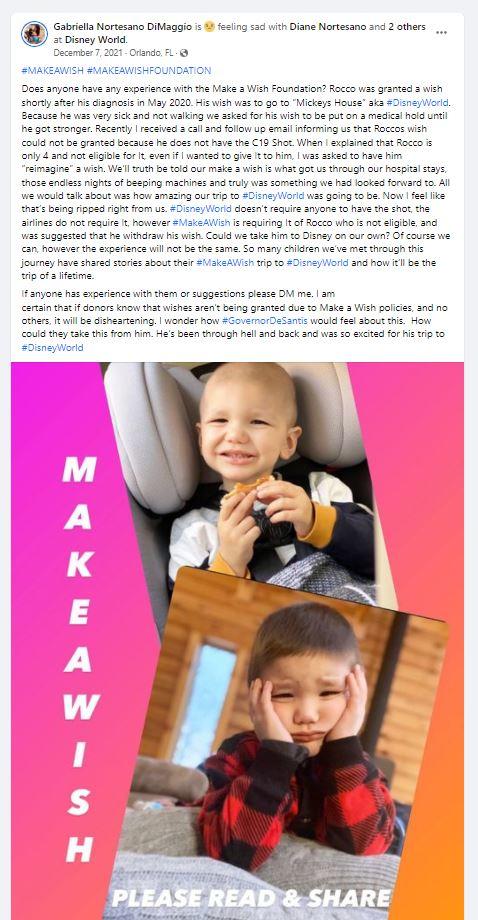 According to the child's mother, Make-A-Wish had granted her son's wish to go to Disney World in May 2020, about three months after the U.S. declared a medical emergency. The family asked for a medical hold until he was stronger. Late in 2021, Make-A-Wish asked for a different wish, citing the travel policy the charity's medical team had put in place.

The restrictions had been lifted, for vaccinated children and their families, on September 15, 2021, as part of what Make-A-Wish called a "phased reemergence plan."

Make-A-Wish explained in an internal document on July 19, 2021, the criteria laid down by the medical advisors to the charity, which serves children facing serious, sometimes life-ending, diagnoses:

In alignment with updated guidance from the Centers for Disease Control and Prevention (CDC) and the American Academy of Pediatrics (AAP), Make-A-Wish's is excited to make the first step toward resuming wish travel. We fully acknowledge that this does not enable travel wishes to resume for all children we serve, but it is encouraging to begin our reemergence. As the COVID landscape continues to evolve, Make-A-Wish will continue to review and update its travel policies.

Claims misrepresenting the Make-A-Wish policy had already circulated in late June 2021 after the president and CEO of Make-A-Wish, Richard Davis, made a video message addressing Wish families. In the video he explained that after consulting with doctors and medical professionals through the National Medical Advisory Council, Make-A-Wish would again be granting wishes that include domestic air travel or large gatherings starting September 15, 2021, if the participants were all at least two weeks past completion of their COVID-19 vaccine.

On June 27, 2021, Make-A-Wish published a news release regarding their health and safety policy, projecting September 15, 2021, as the date when they would begin granting some types of wishes that include domestic air travel or large gatherings for vaccinated children and their families. The following day, June 28, 2021, Make-A-Wish published an additional news release titled, "Make-A-Wish Counters Misinformation: Vaccine Policy." This statement clarified that Make-A-Wish does grant wishes to children who are not vaccinated, that children do not need to have an end-of-life diagnosis to be eligible for a wish and that the vaccination policy does not apply to children who have received an end-of-life prognosis.

Lead Stories reached out to Make-A-Wish to confirm if the changes had gone into effect as planned. A public relations officer responded by email on January 18, 2022, with this statement:

The policy that we mentioned in our June statement did go into effect on September 15 as planned. We have an advisory council made up of 19 medical professionals nationwide that we have consulted with throughout the pandemic to ensure that we are keeping wish kids' safety at the center of any decision we make. The council unanimously recommended that given the risks of Covid for children with critical illnesses, who are some of the most vulnerable among us, we should have a vaccination policy in place that mitigates the risks for certain types of wishes. It's important to note that the vaccination policy does not apply to any child who has received an end-of-life prognosis. Some people are surprised to find out that wish kids are not necessarily terminal. While we do serve those families as well, many wish kids go on to lead full lives, and it's our responsibility to help in the healing process.

This policy, which is reviewed consistently, is informed by the American Academy of Pediatrics (AAP) and over 70 Make-A-Wish medical advisors, who are some of the leading pediatric care specialists throughout the United States. The children we serve are some of the most vulnerable among us, and that's why we are continuing to prioritize their health and safety. We are eager to lift these precautions as soon as it is safe to do so.

The DiMaggio story was picked up by several outlets. On December 16, 2021, DiMaggio shared a video clip to Facebook of her appearance on One America News with Dan Ball. Although the chyron said, "4-YR-OLD DENIED DYING WISH OVER COVID VAX STATUS," in the interview DiMaggio was clear in stating that her son has been in remission for one year. The segment wrapped with DiMaggio sharing the news that after seeing her Facebook post, another wish-granting nonprofit, "Wigs and Wishes," reached out to her family and promised them a Disney trip.

The Make-A-Wish Foundation is refusing to grant a wish to Rocco DiMaggio, a 4-year old cancer patient, to go to Disneyworld because he is not vaccinated even though 4-year old children aren't eligible to be. @MikeCarterTV reports.@HeatherChilders @BobSellersTV pic.twitter.com/fPf8meb6AC