Did Donna and Rosy Khalife net "the biggest deal in 'Shark Tank' history" by pitching a "CBD formula that can stop Tinnitus instantly and for good"? No, that's not true: This is a fake clickbait article. The Khalife sisters appeared on the ABC show "Shark Tank" in 2016, asking the investors to buy into their educational box subscription service, Surprise Ride, not for a gummie candy cure for tinnitus The post claiming they pitched the Tinnitus cure is another bogus claim that uses celebrities to sell someone else's products.

The claim appeared as an article (archived here) with no publishing date on the website under the title "Sisters From MIT Land Massive Deal For Powerful Method To End Tinnitus." It opened:

Donna and Rosy Khalife, sisters and chemists from MIT, net the biggest deal in Shark Tank history as all 6 Sharks teamed up to seed the company with an a staggering $2.5 million dollars! 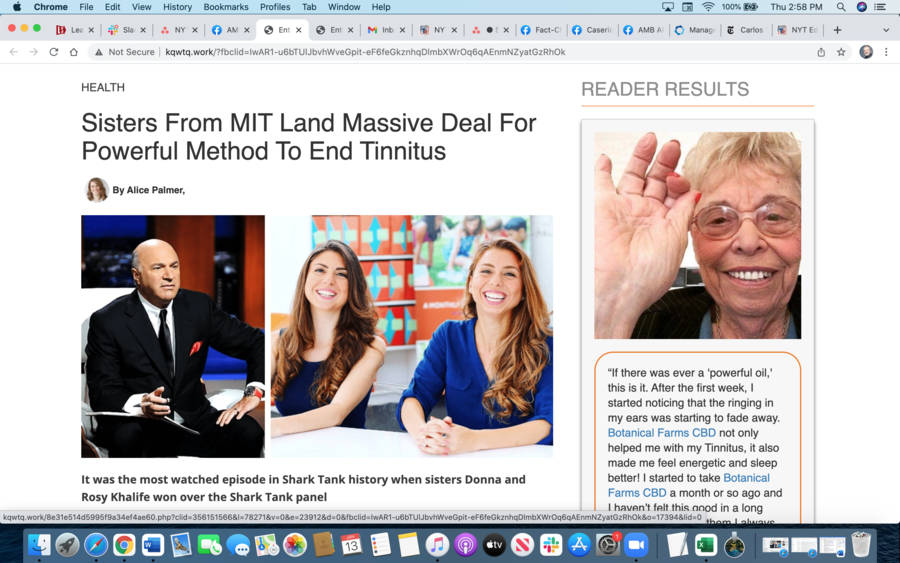 The "article," which is really a clickbait ad, is the same fake advertisement that Lead Stories debunked in 2021 about the Khalife sisters. This time it changed from quit smoking gummies to a tinnitus cure.

Lead Stories previously published an email from the Khalifes dated March 23, 2021, in which they denied selling CBD gummies:

We are in no way affiliated with Jolly CBD Gummies and never pitched this product on Shark Tank. We are the inventors of Surprise Ride, which delivers activity kits to kids in the mail that give them a break from screentime. We don't support any ads or claims using our likeness to sell Jolly CBD Gummies.

This version of the clickbait has the sisters convincing the Shark Tank investors to buy into a company that makes CBD gummies that alleviate tinnitus, a ringing in the ears.

Apparently the Khalife sisters have invented a new Botanical Farms CBD formula that can stop Tinnitus instantly & for good.
While there are a number of "supplements" on the market that are claiming to help cure Tinnitus, the Khalife sisters have created the first reuptake inhibitor (RI), making it immediately put an end to Tinnitus.
RI's work by blocking the inhibiting the plasmalemmal transporter-mediated reuptake of a neurotransmitter from the synapse into the pre-synaptic neuron. What this means to people without a doctorate in chemistry: a powerful help for Tinnitus.

There is no mention on Donna Khalife's website nor her LinkedIn page of a treatment for tinnitus. Rosy Khalife's LinkedIn page also does not mention any association with this product.