Does this photo of a young woman casually looking at her phone while riding public transportation with an AK-47 rifle in a canvas tote bag show "life in Ukraine now"? No, that's not true: While not all the details of the photo have been verified, the photo itself has been circulating online since late March of 2020, two years before the hottest days of the standoff with Russia at Ukraine's border. The scene was not photographed in 2022 in Ukraine.

The photograph of the young woman was posted online as early as March 30, 2020, and added to the collection of knowyourmeme.com on July 14, 2021. The photo surfaced again in mid-February 2022, captioned as if it were a recent picture from Ukraine. One example was posted on Twitter (archived here) on February 12, 2022, with the caption: 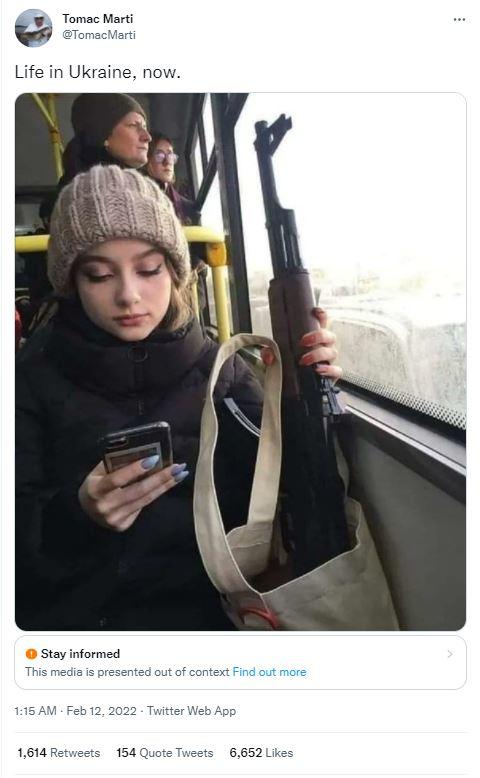 Two early posts, one on Reddit and one in a blog, captioned this photo as having been taken in Belarus -- something Lead Stories has been unable to verify. Some commenters thought they recognized the woman as a Russian model. While the woman in the photo resembles this model, Lead Stories was unable to trace the photo to any of her known social media accounts, or to identify the photographer.

Lead Stories spoke with weapons experts who noted there appeared to be a groove in the rifle's magazine, indicating that this was likely an airsoft replica, the type of equipment that would be used in a simulated warfare sport, but not a true AK-47 rifle.

On March 30, 2020, the photo was posted to the subreddit /ANormalDayInRussia. The photo -- with text saying, "And what will you buy first of all before the 'end of the world'?" -- was included in an April 6, 2020, collection (archived here) of Russian language lockdown memes posted by the Russian news website URA.RU. 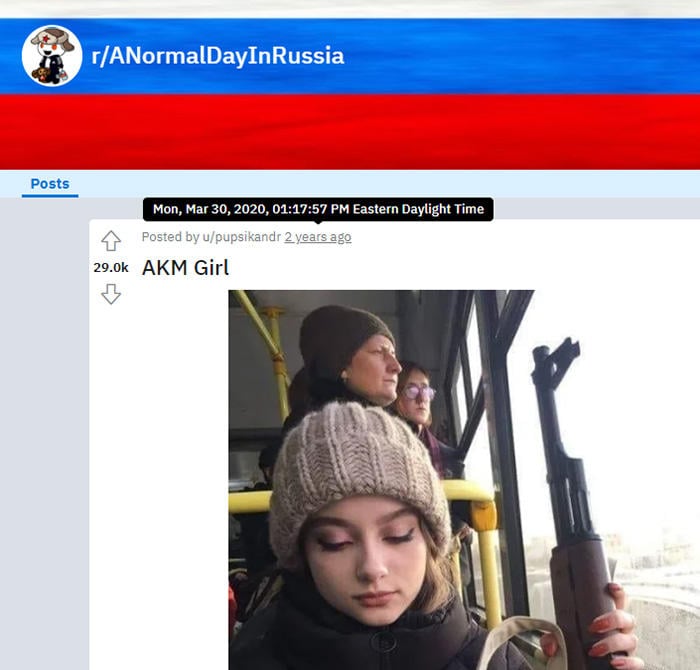