Does this article provide a correct comparison between the severity of myocarditis cases caused by COVID vaccines and those resulting from COVID-19 illness? No, that's not true: It gets the comparison backward.

Myocarditis experts say cases of inflammation of the heart muscle caused by COVID infection are significantly worse and far more common. A founder of the Myocarditis Foundation, Mayo Clinic specialist Leslie T. Cooper, M.D., said the accumulating evidence is that there's a greater risk of serious myocarditis from infection than there is from the rare incidence of vaccine-triggered myocarditis.

The claim has been made several times on social media and in a February 14, 2022, article (archived here) in clarkcountytoday.com under the title "'Health nightmare': Dr. Robert Malone spotlights study on mRNA spike protein." It opened: 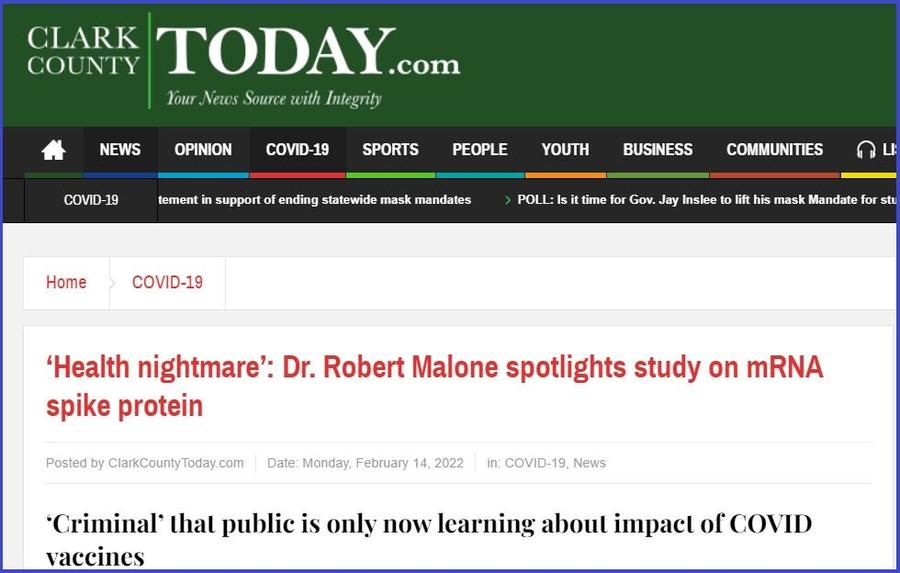 The clarkcountytoday.com article cites numerous claims, but this fact check will address claims about myocarditis (swelling of the heart muscle).

Citing a podcast by a cardiologist sued by Baylor University Medical Center for using Baylor's name to bolster his claims about COVID vaccines, the clarkcountytoday.com article says it is known the spike proteins generated by mRNA vaccines against COVID-19 "go right into the heart."

That's not actually how it works, said Cooper, who is chair of the Department of Cardiovascular Medicine at Mayo Clinic in Florida and treats COVID-19 patients.

"Injecting it into a muscle in the arm, most of the nano particles are taken up locally," he said, in a February 18, 2022, phone interview with Lead Stories. By "nano particles," he was referring to the way the mRNA vaccine delivers messenger RNA blueprints to muscle cells that then grow the COVID-like spike proteins. The spikes train the immune system to attack if the patient is infected with SARS-CoV-2, which is characterized by the spike structure. Although it is in rare cases possible some nano particles would get all the way through, he said, "They don't really enter the venous system and make it all the way to the heart."

Derek Lowe, a Ph.D. chemist who leads vaccine development projects and writes about vaccine development for the journal Science, wrote in his May 2021 column that spike proteins are mostly attacked by antigens or demolished in the liver and don't get widely distributed in the body:

Some of the vaccine dose is going to make it into the bloodstream, of course. But keep in mind, when the mRNA or adenovirus particles do hit cells outside of the liver or the site of injection, they're still causing them to express Spike protein anchored on their surfaces, not dumping it into the circulation.

Here's the EMA briefing document for the Pfizer/BioNTech vaccine - on pages 46 and 47, you can read the results of distribution studies ... In the first hours, there's also some circulating in the plasma. But almost all of that ended up in the liver, and no other tissue was much over 1% of the total. That's exactly what you'd expect, and what you see with drug dosing in general: your entire blood volume goes sluicing through the liver again and again, because that's what the liver is for.

Cooper said the newest studies show a handful of suspected vaccine-driven cases of myocarditis per million vaccinations, while post-infection cases are several times that. A non-peer-reviewed "letter" to the New England Journal of Medicine January 27, 2022, edition, for instance, reported that of more than 400,000 Israeli teens vaccinated against COVID, of the 16 cases of myocarditis that were suspected to have been caused by the vaccine, 15 were unvaccinated teens.

The article goes on to say, although it's unclear if it is attributing it to McCullough, that:

... the studies show that the myocarditis produced by a COVID-19 infection tends to be mild and 'inconsequential' while the myocarditis caused by the vaccine can be severe.

Again, that's not what the accumulating evidence is showing, Cooper said. During the interview with Lead Stories, he said he was drafting one new research paper with colleagues, had done peer review on another and was looking at the new research presentations made at the February 4, 2022, meeting of the Center for Disease Control and Prevention's advisory committee on immunization practices. In each case, data show a growing consensus opposite to what the clarkcountytoday.com article asserts, he said.

In terms of severity, there's really no comparison ... Having been on the front line of this, taking care of COVID patients, there's no doubt the virus has got to be, 100 percent, worse than the vaccine.

In earlier fact checks of similar claims, doctors with on-site experience and research in hand said fear-mongering about vaccine-generated spike proteins distract from the greater risk: infection by SARS-CoV-2.

In a January 27, 2022, email to Lead Stories, Professor Deborah Fuller of the University of Washington wrote that it is false to suggest spike proteins are toxic and that they leave the injection site and accumulate in various organs:

There is no evidence that the miniscule amount of Spike protein produced by the mRNA vaccines is toxic and there is no evidence that it ... accumulates in tissues. In fact, the studies that have been done to date show that only very, very small amounts are produced and rapidly eliminated from the body ... the protein quickly disappears after initiating the immune response.

Fuller is head of a vaccine lab at the University of Washington, location of the first U.S. outbreak, where doctors and researchers have studied the SARS-CoV-2 virus and COVID since 2020. A Ph.D. in microbiology who has worked on COVID vaccine candidates, she says the mRNA approach is so effective and safe, not vaccinating children with it is a mistake.

McCullough was listed as vice chief of medicine and a cardiologist on the staff of Baylor Scott & White Medical Center in Dallas on June 1, 2021, when Lead Stories inquired about his false claim that vaccines had killed 4,000 people. The university distanced itself from his COVID claims in a June 2, 2021, email from media relations officer Jennifer McDowell, who wrote:

Dr. McCullough is no longer employed with our medical group. His views are his own, and he is not speaking on behalf of Baylor Scott & White Health.

Baylor in 2021 sued McCullough, alleging that he has misused the university and med center name while publicly making false claims about COVID and the COVID vaccines.