Do NATO or European Union countries have plans to send combat aircraft to Ukraine? This claim concerns a fluid situation that the original post accurately described: an announcement that, as of March 2, 2022, looks like will not come to pass after all.

Over the course of several days this situation has evolved. On February 27, 2022, Josep Borrell, high representative of the European Union for foreign affairs and security policy, announced that the EU would finance sending jets to Ukraine. However, as of March 1, 2022, it was determined that that combat aircraft would not be delivered by the European Union. If any jets are donated to Ukraine, they would come from individual countries.

It had also been suggested that three countries -- Bulgaria, Slovakia and Poland -- might be the ones to independently transfer the fighter jets to Ukraine. But Bulgaria and Slovakia have each made it clear that they would not be doing that, as of March 2, 2022.

On March 8, 2022, the government of Poland released a statement saying it was ready immediately to place its MiG-29 jets "at the disposal of the Government of the United States of America" if the U.S. would, in turn, provide Poland with "used aircraft with corresponding operational capabilities." News reports indicated the U.S. would likely donate the Polish jets to Ukraine.

Borrell made the promise of the EU funding jets for Ukraine in a press conference on February 27, 2022. This news was widely reported, but in the following days this plan dissolved. A Facebook post published by the page "World War 3 News" on March 1, 2022, opens with this caption:

Three NATO countries to transfer 70 combat airplanes to Ukraine
Bulgaria, Poland and Slovakia will transfer 70 combat aircraft to Ukraine that can be stationed on airfields in Poland, TASS reports citing the press service of the Ukrainian Navy.
'If necessary, they can be stationed on Polish airfields, from which Ukrainian pilots will perform combat missions', the press service said.
According to its data, Bulgaria will transfer 16 MiG-29 fighters and 14 Su-25 attack planes, Poland - 28 MiG-29 planes, and Slovakia - 12 MiG-29 planes. 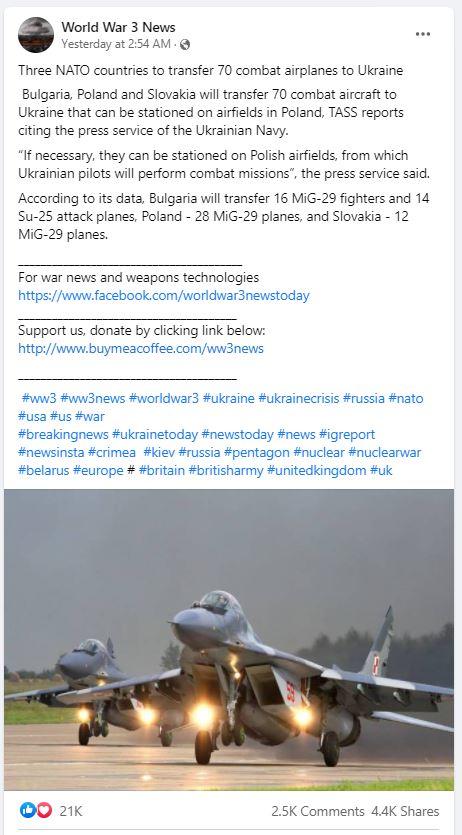 This post references a report from the Russian news agency tass.com published on March 1, 2022, titled, "Kiev says three NATO countries to transfer 70 combat airplanes to Ukraine," but the news in this report was already out of date at the time of publication. Politico.com reported on this on February 28, 2022, but on March 1, 2022, updated its article with new information and headline: "European plan to donate fighter jets to Ukraine collapses." The updated article began:

Over the course of a confusing 48 hours, the EU announced it had brokered an arrangement for member states to allow Ukrainian pilots to start flying their used Russian fighter planes, only to have those countries deny there was any such deal even as Kyiv trumpeted the impending arrival of the jets.

The dissolution of the deal comes as European countries lined up Monday to announce new weapons packages for Ukraine, from anti-armor and anti-air rockets to artillery and medical supplies. 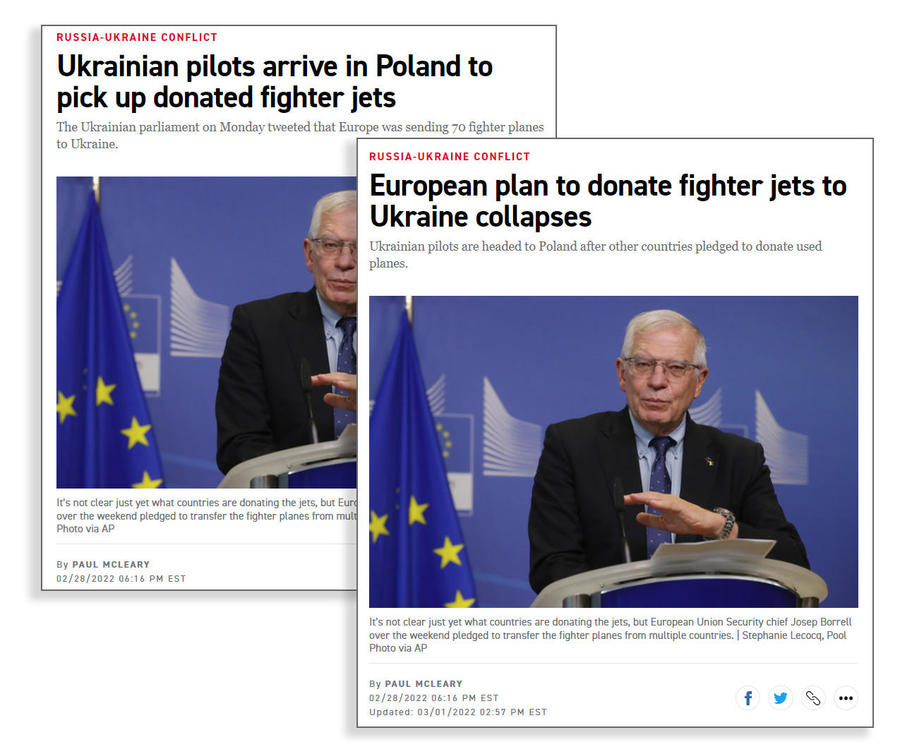 At the 23:00 mark in the February 27, 2022, press conference video embedded below, Borrell responds to a question from Markus Becker of Der Spiegel about how to get these supplies into Ukraine. Borrell's reply, transcribed:

We are going to supply arms and even fighter jets. We are not talking just about ammunition; we are providing the most important arms to go to war.
Minister Kuleba has been asking us that they need the type of fighter jets that the Ukrainian army is able to operate. We know what kind of planes and some Member States have these kinds of planes.

This news was also relayed in a February 28, 2022, Facebook post from the page of the Air Force Command of UA Armed Forces: 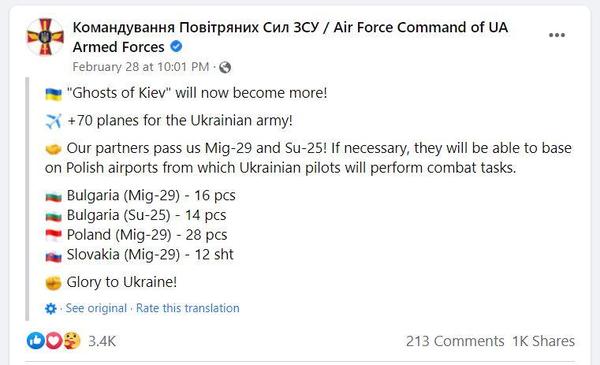 On February 28, 2022, the Bulgarian news website novinite.com reported, "PM: Reports of Bulgaria Giving Away its Fighter Jets to Ukraine are Absurd!" Kiril Petkov, the Bulgarian prime minister was quoted in the article:

In general we lack planes, we can't give the only planes we have to anyone. We have a small number of flying planes, we have a problem with the supply of parts, It is completely absurd to give them away.

On March 1, 2022, the minister of defense of the Slovak Republic posted on Facebook to address this question of whether Slovakia would be donating MiG-29 fighters. He wrote:

I repeat, that this debate did not even run, which means slovakia is not planning. In addition, Ukrainians don't even ask for that from us.
Yes, I announced that we are discussing the possibility of 'getting rid of' MiGs, but unless everything is said - nothing is said. It would be extremely irresponsible to get rid of an element of protection of our airspace without having an adequate replacement.
Please, let's give space to rational negotiations, listen to the terms of Ukraine and I assure you that as always, in this topic I will inform you if there is an update moment.

We are not going to send any jets into Ukrainian airspace

On March 2, 2022, in an article titled, "Is Poland Sending Fighter Jets to Ukraine? The short answer is 'maybe.' But, well, it's complicated," Newlinesmag.com reported:

Ukrainian pilots are currently in Poland, New Lines can confirm, following reporting by Yahoo! News. But they are there not for training purposes but for 'consultations' with Warsaw on completing the relevant paperwork for a possible handover of aircraft, according to a former high-ranking Polish military official, who added that 'no decision at the political level has been made' as to whether this transaction will occur.