Was a NATO-labeled laptop with intelligence found at the headquarters of Ukrainian nationalists? No, that's not true: NATO told Lead Stories the unit appears to be one of their old surplus laptops that was sold years ago, and one that would have had all classified files removed before it was sold. Separately, David van Weel, NATO assistant secretary general for emerging security challenges, tweeted on March 6, 2022, that NATO doesn't work on 15-year-old laptops.

Earlier, Russia started a special military operation in Ukraine to protect civilians in the Donbass People's Republics of Donetsk and Lugansk, whose authorities appealed to Moscow for assistance following repeated shelling of their territories by Ukrainian forces.

A laptop with intelligence data has been found at one of the headquarters of the Right Sector* (Ukrainian nationalists). The computer allegedly has a licensed NATO registry number, Donetsk People's Republic (DPR) head Denis Pushilin said on Sunday.

This is how the article looked on the Sputnik website on March 7, 2022: 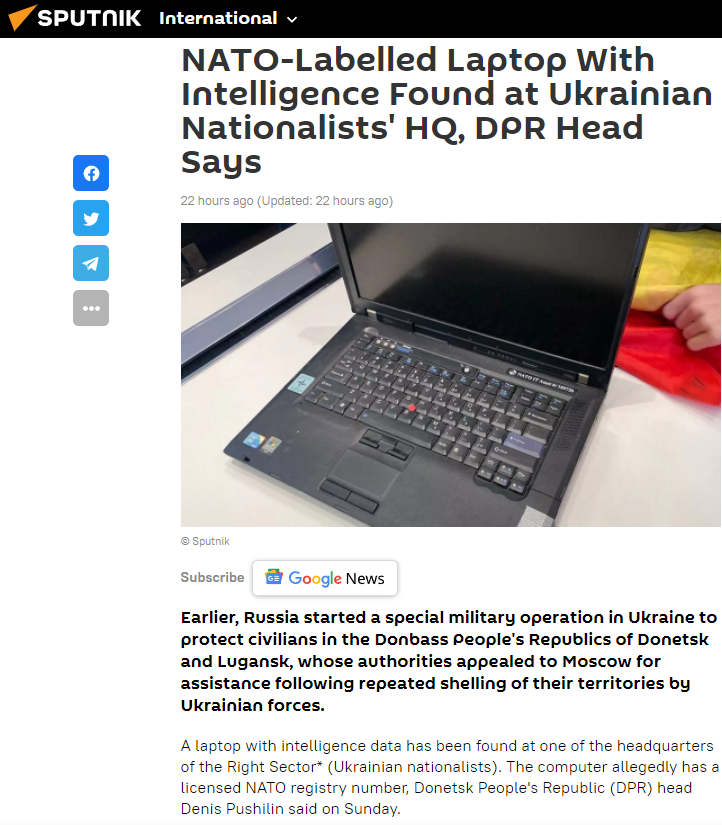 In a March 7, 2022, email to Lead Stories, NATO said a review into the vintage Lenovo ThinkPad R500 laptop is ongoing:

Initial findings are that this computer was sold as surplus several years ago in line with standard procedures. There would not have been any classified files on the computer when it was sold.

In addition to the Sputnik article, images of the laptop were widely shared on social media, including this one on Twitter:

NATO's van Weel responded to a retweet of the post by a Dutch politician named Thierry Baudet, who accused NATO, the United States and European Union of forcing a war with Russia:

No, we don't work on 15 year old laptops at NATO @thierrybaudet Then we would have just as bad information as you in this war of Russia against Ukraine and its innocent civilians.

Sputnik News is a Russian state-owned news agency that was established by the Russian media group Rossiya Segodnya in November 2014. Shortly after the Russian invasion of Ukraine in February 2022, tech giants like Facebook, Google, Apple and Microsoft moved to limit the reach of Kremlin-controlled media outlets. This is what NPR reported on March 2, 2022:

Google has booted Russian state media from its Google News service. Facebook, Instagram and Twitter are making posts from Kremlin-affiliated news outlets harder to find. TikTok, YouTube and Facebook are blocking two of the biggest outlets, RT (formerly known as Russia Today) and Sputnik News, across Europe. Apple, Google and Microsoft have pulled their apps from their app stores.

Russian President Vladimir Putin announced military action in Ukraine on February 24, 2022. At the time, he said the action was taken to "denazify" the country and its leadership. Some Ukrainian nationalists are associated with far-right groups.