Does a video of Russian President Vladimir Putin show him putting his hand through a microphone, meaning it was filmed in front of a green screen? No, that's not true: His hand appearing to float through the microphone is only visible in low-resolution videos and not in higher-resolution ones. The video anomaly appears to be due to video compression and does not show Putin filming in front of a green screen.

The claim appeared in a Facebook post (archived here) on March 5, 2022. It is a 15-second video without sound, with a caption saying, "Zelensky trolls Putin for using a green screen." 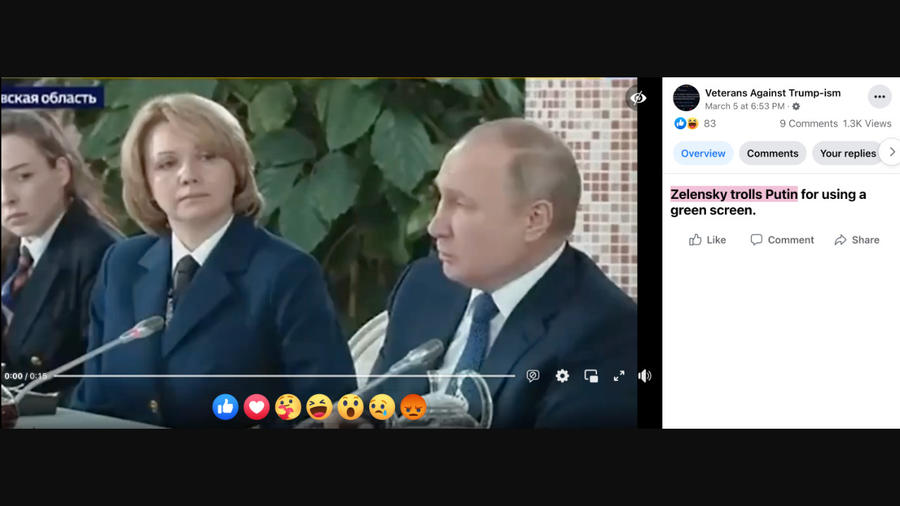 the hand appears to go through the microphone.. the microphone disappears & the hand magically goes through it..#russia #Putin #Ukraine pic.twitter.com/jlTdZ6HtDT

In the video on Twitter and Facebook Putin's hand appears to move through the stem of the microphone in front of him on the table.

A higher-resolution video on YouTube of Putin speaking to Aeroflot employees on March 5, 2022, does not show his hand moving through the stem of the microphone. The hand gesture is seen at 12 seconds and again at 21 seconds in the video:


The illusion of Putin's hand going through the microphone stem is due to video compression. When the video is shared to other apps like Twitter or Facebook, it's compressed, or made smaller to save space:

Video compression is the process of encoding a video file in such a way that it consumes less space than the original file and is easier to transmit over the network/Internet.